Having reached the 50-year mark since incorporation, Fairview Heights has taken steps to position itself as a location for continued retail activity, largely through ongoing and anticipated redevelopment, according to Director of Economic Development Paul Ellis. 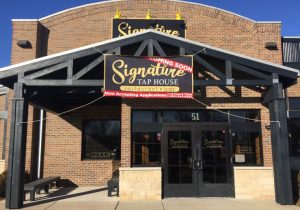 There was major re-leasing of vacant store spaces in 2019, among them Total Wine & More, which went into the former Here Today location; the $1.3 million
Urban Air Adventure Park in the former Sports Authority; Signature Tap House, which will open in former Logan’s Steakhouse in the first quarter of this year; and a Planet Fitness location coming to the former Toys ‘R’ Us, also in the first quarter.

About two-thirds of the Toys ‘R’ Us space will be taken up by a new Planet Fitness location. The manager partner is John Clancy, who runs Planet Fitness Midwest.

“Fairview’s been a retail center for 50 years, and like everybody else we’ve had our ups and downs. We had a significant number of vacancies last year,” he said. “There are always people who think your buildings are getting old and tired and not as attractive. But the market is bearing out our expectations for stronger and better uses (of these buildings).”

Total Wine is doing several times the business as its predecessor, he said, and each of the above businesses is an anchor for their locations.

Ellis said there has also been an increase in local support for entrepreneurs through ongoing development of the Metro East Business Incubator and now, CafeBiz618, a new co-working center opening in the first quarter.

Several women entrepreneurs had urged formation of a coworking space and they are now renovating space next to TJ Maxx in the Crossroads Centre shopping area. The facility will be open in January, with event space, office space at a variety of price points and shared services.
Crossroads Centre, off Lincoln Trail, was among the most dramatic modernizations this past year, which saw more than $11 million in redevelopment projects city wide.

IMPACT Strategies was the contractor for the $2 million facelift of building facades and parking lots. Purchased in February 2018 by the Northeast Capital Group, the center is anchored by Big Lots, Dollar Tree, Ruler Foods and Sky Zone.

Ellis spent much of the past year working on business strategies to position the city as a continuing economic development player. There has been a general redesign of incentive programs to better fit emerging market conditions, including with the addition of a PACE financing program and the overhaul of the Business Assistance Program, set to be completed in the first quarter.

The city has also been working on completing an overall economic development strategy and is about to launch a major marketing campaign aimed at consumers rather than developers.

“Basically, it’s going to be about shopping in Fairview Heights, on behalf of our retailers and in cooperation with our retailers,” he said. “We would like to
increase the amount of sales per square foot for all of our retailers.”

Editor’s note: This story appeared in the January issue of the Illinois Business Journal. More stories from the issue can be found on the Current Edition link at ibjonline.com

Kaskaskia College area residents get to weigh in on internet access