Southwestern Illinois has a new partner, and it’s a friendship that both sides hope will pay dividends across a vast distance.

Silvia Torres Bowman, director of the Illinois SBDC International Trade Center at Southern Illinois University Edwardsville, and Ricardo Perez-Luyo, director of international business programs at Universidad de Lima in Peru in South America, signed a memorandum of understanding between the respective universities, during Perez-Luyo’s visit to SIUE in December.

The joint agreement with the Peru university’s Entrepreneurship Center aims to stimulate economic development through various initiatives in support of small and medium-sized businesses as well as connecting entrepreneurs from Peru and Southern Illinois.

“This new alliance will bring new opportunities in trade and education for Peru and Illinois,” Torres Bowman said. “We hope to build a solid bridge, forging connections between southern Illinois businesses, SIUE faculty and students with their Peruvian counterparts.”

“It’s a quite interesting pilot project that we have already started working on,” Perez-Luyo said. “The point is that students from our universities are going to create business plans for national and foreign companies. We are talking about the application of knowledge in a highly competitive market such as the United States, promoting not only trade but investments.”

Much can be gained. During the December conference, officials discussed the trade numbers between Illinois and Peru. Among them:

– Illinois ranks fifth among 50 U.S. states in exports to Peru.

– Illinois ranks 13th among the 50 U.S. states in imports from Peru.

The top five industries for Illinois exports to Peru in 2018 (the most recent numbers) were: machinery (except electrical); computer and electronic equipment; transportation equipment; agricultural products; and chemicals.

The top five industries for Illinois imports from Peru in 2018 were: agriculture products; food and kindred products; goods returned to Canada (exports only); primary metal manufacturing; and apparel and accessories.

Currently, Illinois ranks third in the nation for new and expanding corporate locations and is home to more than 2,000 foreign firms that employ more than 324,000 people in the state.

Yet, there is no known Peruvian foreign direct investment in Illinois, creating an opening on which to build.

The new pilot project seeks to help small businesses increase their export/import capacities with the support of the Illinois SBDC International Trade Center network and the participation of students, providing them with opportunities to get experience in trade and commerce.

Perez-Luyo served as a keynote speaker for “Peru: A Friendly Country for Doing Business” at a welcoming luncheon held in Birger Hall on Tuesday, Dec. 3. The Southwest Illinois Trade and Investment Council co-sponsored the event, which was attended by SIUE faculty and students, as well as regional businesses and leaders.

Over the past decade, Peru has been the fastest-growing economy in Latin America with a 5.5 percent average annual growth rate, exhibiting the region’s second-lowest inflation rate at 3.6 percent. Poverty levels are down from 42.4 percent in 2007 to 21.7 percent, and Peru maintains the highest consumer confidence levels in Latin America.

“Peru in the 1980s was very bad in terms of fiscal debt, but today we are doing very well in terms of internal finance and external values,” Perez-Luyo said.

He noted that 75 percent of the country’s imports are classified as zero tariffs. Lima, the capital, was once the center of commerce, which in more recent years has spread throughout the Peruvian region.

He said Peru features “equal treatment” between foreign and domestic investments regarding taxes and regulatory issues. Exchange tariffs and taxation in Peru are both very low, he said.

He said the U.S. is a very “capital intensive economy, while Peru is “a natural resources and labor-intensive economy.” The country has secured many contracts from foreign investors and wants to do more in Illinois.

“Ricardo’s leadership, boundless energy and solid commitment to this new partnership will bring us even closer to our shared vision of connecting Peruvian and Illinois communities through international education, entrepreneurship and small business support,” Torres Bowman said. “I very much look forward to working with him in 2020 and beyond.”

Trade missions between the two countries are part of the long-range plan. Torres Bowman said the American Chamber of Commerce in Peru has announced a visit to Southwest Illinois next year, leading a delegation of representatives from the public and private sectors.

Tim Schoenecker, SIUE School of Business dean, said he hopes the relationship with the Lima University expands to include student exchanges between the two schools.

For more than 35 years, the International Trade Center has helped Illinois companies compete more effectively in the global marketplace. Right now, it is working with a division of Chile’s Ministry of Economy and Development to develop a cooperative agreement that would connect that country with Southern Illinois businesses.

The ongoing partnerships directly resulted from Torres Bowman’s visits to Peru and Chile in March 2019.

“Based on clients’ feedback, recent and ongoing trade developments, my personal and professional background (born, studied and worked in Lima, Peru), and the support of the Southwest Illinois Trade Council, I felt this year was the ideal timing to make a visit and personally connect with main trade organizations and renowned universities in South America,” she said. Currently, separate partnership agreements are in their final stages between the SIUE School of Business with Universidad de Lima and Universidad de Chile.

Torres Bowman obtained a bachelor’s in business administration from Universidad de Lima in the late 1980s.

The Illinois SBDC International Trade Center provides individualized, no-cost export consultation, identification of foreign buyers, agents and/or distributors through trade leads, international market analysis and more. The ITC is funded through a cooperative agreement with the U.S. Small Business Administration, the Illinois Department of Commerce and Economic Opportunity, and SIUE. 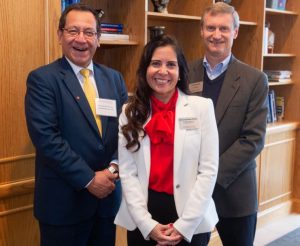 This story appears in the January issue of the Illinois Business Journal. For more content go to the Current Edition link at ibjonline.com