“We have found them jobs, working and keeping down the rodent population plaguing the levee system,” MESD Director Stephen Adler said. 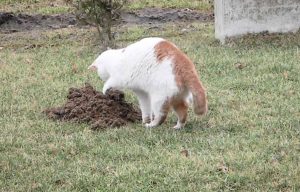 Six months ago, MESD adopted dozens of feral cats from Metro East Humane Society’s Working Cat Program in order to help with its infestation of moles, voles and other burrowing animals along its levee system.

“We’ve had the cats for months now and they are doing a fantastic job,” Adler said

Adler said MESD tried fighting the unwanted pest problem on their own, however it was doing more damage than good. 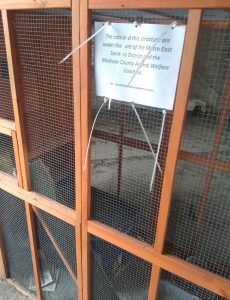 “Certain methods in trying to get rid of the rodents do not work, but rather destroy the integrity of the levee even more,” he said.

Adler said that burrowing animals are a serious threat to the performance of a levee. He sais the U.S. Army Corps of Engineers looks at the issue when it inspects the district’s 37.5 miles of levees for certification.

“The voids created by the burrowing critters can contribute to a collapse of an embankment,” he said. “It undermines the levee’s protection.”

So far, $170 million has been invested into levees in the Metro East and work will continue to upgrade the system.

Adler said that taking part in the Working Cat Program is a win-win situation for everyone.

“It not only helps protect the public by reducing the rodent problem,” he said. “It also puts the cats to work. We give them a place to stay, a little food in the first few weeks and they save us higher maintenance costs in the long term.”

Prior to coming to MESD, the cats were spayed/neutered, vaccinated, micro-chipped and ear-tipped.

“We started this in one area on the levee to see how it would go and it’s been such a success MESD plans on expanding it,” Adler said. “We plan to ‘hire’ even more cats and put them to work in both counties.”

MESD operates and maintains the levee, along with 52.5 miles of canals, 14 miles of sanitary sewers and eight pump stations within Madison and St. Clair counties.

MEHS collaborated with Madison County Animal Care and Control to offer the Working Cat Program. The program started by adopting cats out to live in barns and rural settings with the new owners benefitting from the felines hunting hunt mice and other nuisance critters.

Adler said after seeing what the program was doing, he felt MESD would benefit from it.

Prior to the implementation of the program, animal control euthanized most feral cats brought in. Now, with help from MEHS, the ferals are “working” to stay alive.

“These are true working cats,” Madison County Chairman Kurt Prenzler said. “This program is an unemployment agency for feral cats.”

Prenzler said he sees the program as a success and it’s helped the county on becoming “no-kill.”

Feral and stray cats produce around 80 percent of all the kittens born in the U.S., according to the Humane Society of the United States. Since the program started in Madison County, hundreds of cats have been fixed and relocated.

The program isn’t exclusive to Madison County; other communities across the country have implemented similar programs.

“These are feral cats that would otherwise be euthanized and can’t be adopted out.” Prenzler said. “This program gives them another shot at life.”

Anyone interested in adopting one of the cats, call (618) 656-4405 or email info@mehs.org. The cats are free, but MEHS recommends they be adopted in pairs.

“You won’t see the cats near their kennels anymore,” Adler said. “That’s because they are working and doing what they were ‘hired’ to do.”