SPRINGFIELD – Gov. J.B. Pritzker signed more than 50 bills last week and has about one week remaining to sign the final 167 of the 599 total bills sent to him by the General Assembly this year.

The most recently signed bills include a package of legislation affecting first responders, a bill striking down a 1998 state law pertaining to greenhouse gas emissions, a banking initiative of Illinois Comptroller Susana Mendoza and a measure to allow graduate student teaching assistants to unionize.

House Bill 2766, which was signed last week, is aimed at “ending the stigma surrounding mental health issues among firefighters and law enforcement officers,” according to a news release from Indian Creek Democratic state Sen. Terry Link, the bill’s sponsor in the Senate.

The measure creates an 18-member task force to study first responder suicides, ensures peer support counselors for first responders are properly trained and allows Illinois State Police officers to remain employed in some cases even if their Firearm Owner’s Identification Card is revoked.

Per the law, the Department of State Police “shall not make possession of a Firearm Owner’s Identification Card a condition of continued employment” if the State Police officer’s FOID card is revoked because the officer was a patient of a mental health facility but is not deemed a danger to themselves or others as determined by a qualified examiner.

The State Police still maintain the “ability to determine a State Police officer’s fitness for duty,” and current collective bargaining agreements cannot be altered, but any future agreement must abide by the new law.

The bill also ensures that sheriff’s offices, police departments and fire departments offer mental health services such as counselors or therapists to employees either through contract or direct employment.

The measure passed unanimously in the House but with seven votes against in the Senate, and it takes effect immediately.

The governor also signed Senate Bill 1183 to expand the scope of the Police Memorial Committee Fund to include scholarships or grants to spouses of police officers killed in the line of duty, adding them to children who are already eligible.  The measure passed each house unanimously and takes effect immediately.

Pritzker’s signature on House Bill 124 means the Illinois State Police can now hire applicants who hold a two-year associate degree or 60 credit hours at an accredited college or university, instead of two years of law enforcement studies. The requirement change passed the House and Senate unanimously and takes effect Jan. 1, 2020.

When Pritzker signed House Bill 3481 last week, he repealed a law enacted in 1998 that prohibited Illinois from reducing carbon and other greenhouse gas emission allowances beyond the goals set for the United States in the Kyoto Protocol – a set of rules adopted at an international conference in Kyoto, Japan, in the late 1990s. The U.S. withdrew from the agreement in 2001.

The new law does not enact new standards, but it gives the Illinois Environmental Protection Agency and Pollution Control Board authority to propose new rules to reduce greenhouse gases.

The bill takes effect immediately after passing 66-44 in the House and 35-17 in the Senate, with Republicans at the time expressing concern that enacting rules regulating greenhouse gas emissions might negatively impact state industries.

Pritzker and fellow Democrat Mendoza touted Senate Bill 1332 as a measure they hope will reduce the use of alternative banking services in Illinois. 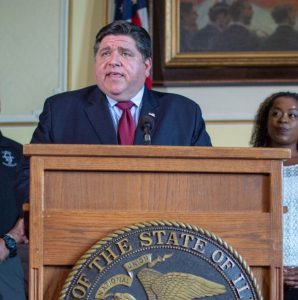 The unanimously-passed measure creates the “Illinois Bank On Initiative” to be run by Mendoza’s office. The measure enables the comptroller to partner with banks, credit unions, consumer advocates and representatives of the community to “certify financial products appropriate for consumers new to banking,” according to a news release.

The comptroller’s website will maintain a list of “Certified Financial Products” and their minimum requirements. Mendoza’s office said the website will highlight “products that provide fair financial service options, such as no maintenance fees, low minimum deposits, low or no overdraft fees and alternative IDs.”

The measure also creates the “Illinois Bank On Initiative Commission,” which will serve the comptroller in an advisory capacity on an unpaid basis, aside from travel reimbursement. The initiative does not otherwise require an appropriation of state funds.

Pritzker’s signature on House Bill 253, which passed 72-37 in the House and 35-19 in the Senate, will pave the way for graduate student assistant teachers to unionize beginning Jan. 1, 2020. Previously, these employees were defined as “students” in Illinois law, preventing unionization.

Per the law, the statewide system will be hosted online, have a 24-hour help desk and provide real-time updates.  The State Police have one year from the signing of the bill, which passed both chambers unanimously, to implement the system.

Among recent actions, the governor exercised his fourth veto, this time on Senate Bill 2126, but he took the action because the bill was identical to House Bill 3628, which he already signed.

All of the remaining unsigned bills were officially sent to the governor between June 21 and June 28, so the governor has a little more than one week to act on the last of the bills within the 60-day statutory window.

The governor has the authority to veto any legislation, but any bill he does not either sign or veto will automatically become law once the 60-day period ends.