A crowd of residents on Tuesday enthusiastically supported plans by Alton residents Jayne and John Simmons to invest millions of dollars in preserving and resurrecting some of the city’s best-known landmark commercial properties and adding longterm vitality to the Downtown core. 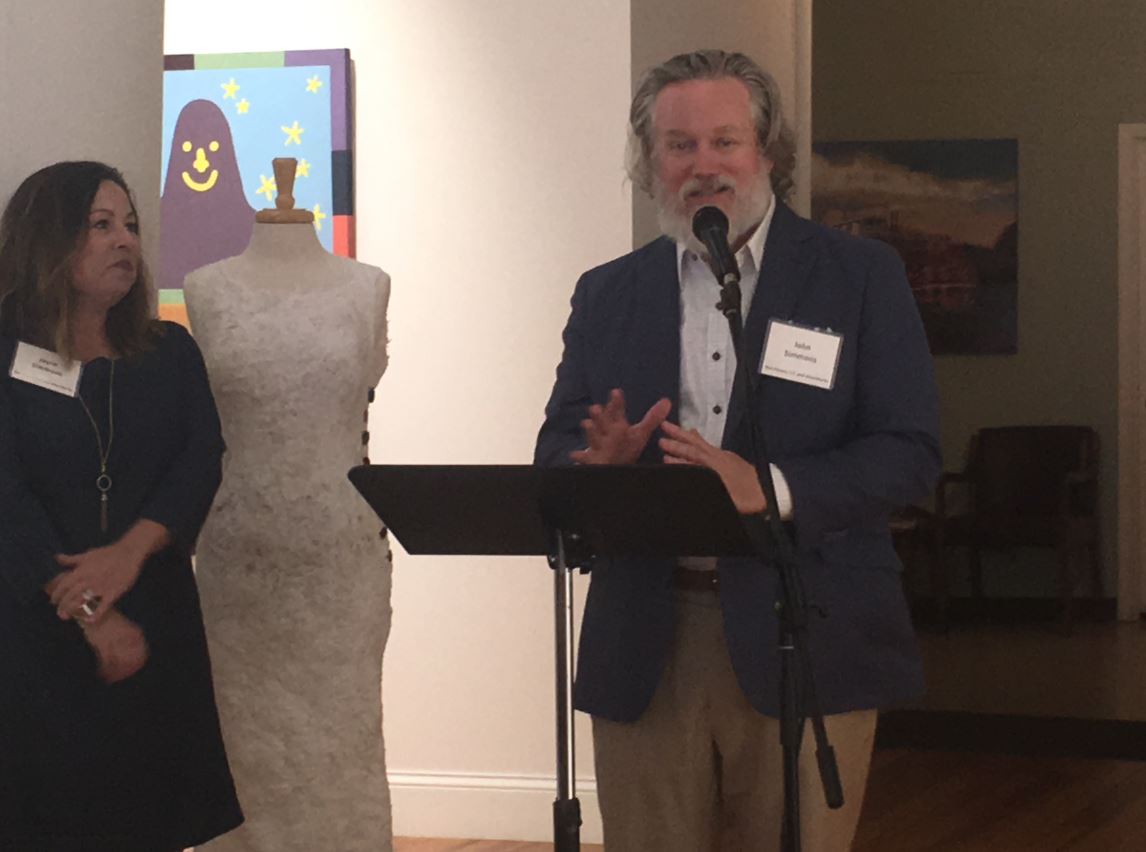 The husband and wife spoke to a crowd of about 200 people during a “What’s Up Downtown” gathering at the Jacoby Arts Center in the 600 block of Broadway. The center is one of dozens of properties the couple has acquired during recent years along the Mississippi riverfront corridor that stretches from Ridge Street to State Street.

The Simmonses hope to “catalyze” development, but it’s going to be up to the city and its residents to get behind it and make the most important decisions, they said. The aim is to make Alton the “Healthiest and Happiest City on the Mississippi River” by 2029.

The year reflects what he figures it will take for pieces to fall together, although work is already underway.

“Someday I’m not going to wake up. I’m in my fifties. I ought to live another 10 years to see some of this take shape,” Simmons told the Illinois Business Journal. He is an attorney and chairman of Simmons Hanly Conroy, one of the most successful plaintiff’s injury firms in the country, based in headquarters in Downtown Alton, the former Smurfit Building that he purchased and renovated in 2010.

Color renderings showing potential building transformations were on display throughout the Jacoby Arts Center, and a five-minute inspirational video painted a picture of what Alton could be. A team of professionals working on the project — some of them longtime Simmons’ associates — were on hand to answer questions and encourage citizens to share their ideas.

“There are so many people who love the city of Alton like Jayne and I do,” said John Simmons. “We think it’s a great time in our city’s history to gather all types of people together and invest our time, energy and passion in helping this wonderful city reach it potential.”

Downtown Alton is the perfect-sized city to remake one building, one park, one street and one opportunity at a time, the couple said. For the Simmons, the first step in imagining a new Downtown Alton was to acquire properties to protect them and the beautiful architectural heritage of Alton.

Renovation will begin on the Grand Theater, Jacoby Arts Center, Pocket Park, the Wedge, and Elfgen buildings as well as the building that houses LuciAnna’s Pastries (Henry and Broadway) late this year, among others. Many other Downtown properties have been purchased, notably among them the former YMCA, the former Telegraph building, the Hotel Stratford, and the Old Post Office.

The goal of renovation is to preserve the historic architecture of the buildings and transform them for modern use. The official grand reopening for the Grand will be held on Dec. 4, 2020, to celebrate the 100th anniversary of the opening of the theater, John Simmons said.

For citizens who want to get involved in the long-term revitalization project, there will be a variety of community engagement opportunities offered this summer for city leaders, business leaders, and groups of all kinds to share their ideas about what they would like to see in the future of Alton.

The team this summer plans to launch a website, social media and other interactive media to keep people up to date and gather feedback and ideas. A storefront space also is planned.

The Simmons will also be speaking at the Wednesday (May 8) Alton City Council Meeting at 101 E. Third St.