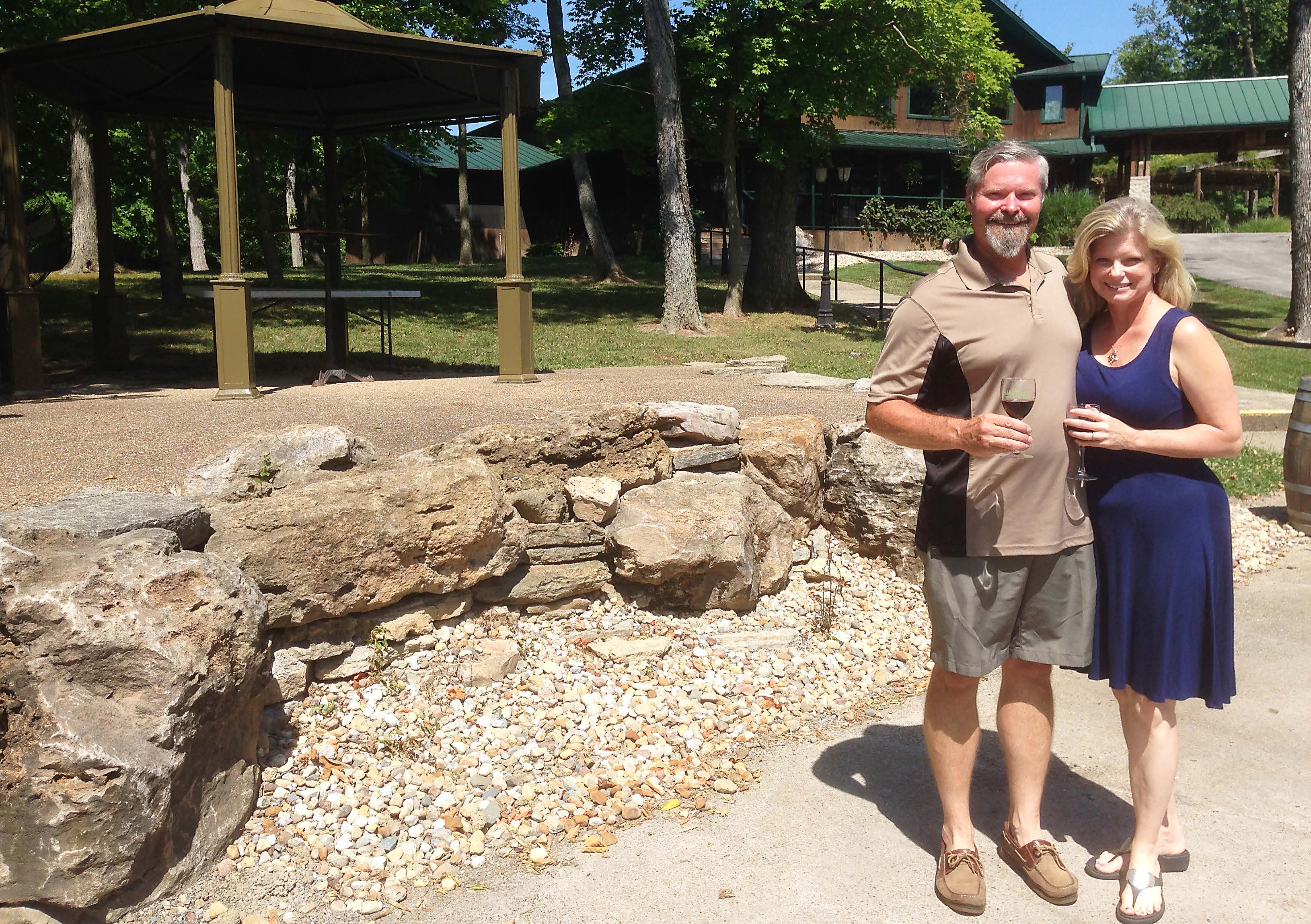 By DENNIS GRUBAUGH
AVISTON — There’s no hiding the hard work at Hidden Lake Winery and Banquet Facility.
Steve and Angela Gorazd haven’t stopped hustling since closing on their $1.5 million purchase of the facility on June 8 from former owner Angela Holbrook. The deal was a year in the making and tested the mettle of two entrepreneurs in their 50s.
“There’s no guidebook” for buying and running a winery, Angela Gorazd said.
Nestled in wooded, Clinton County farm country about 40 minutes east of St. Louis, the 92-acre estate first caught Steve’s eye in the spring of 2016 when he saw the notice that it was for sale. At the time he was managing field services at Boeing Co. and at the end of a 30-year career. He was thinking about retiring and going into business for himself. He was not ready to give up working, and neither was his wife, a nurse practitioner.
Shortly thereafter, the couple visited the winery on a Friday night in June 2016 and sat on the large concrete deck overlooking the winery fountain, a centerpiece of the main, manmade lake, one of two bodies of water on the pristine property.
“The weather was beautiful. We had a bottle of wine. There was somebody playing music. We looked out, and it was like, ‘Oh, my gosh’,” Angela recalled.
They were hooked, and ready to buy, but the work was only just beginning. What followed was months of negotiation, licensing efforts and financing hurdles. The Gorazds began creating their own guidebook.
The couple began negotiating in August with Holbrook, a physician at Alton Memorial Hospital, and the back and forth lasted until around November. The details of the purchase agreement took a couple more months before financing and licensing issues could be tackled.
“About six months before we closed, I started working with everyone to get licenses in place,” Steve said. “Had I bought the winery as an ongoing business, I could have rolled everything over.” His advisers told him that starting fresh would keep him from unknown liabilities.
“I struggled with getting all the winemaker licenses,” he said of the cumbersome process. At the federal level, one must go through the U.S. Bureau of Alcohol, Tobacco, Firearms and Explosives and submit to investigations and background checks.
The last license he had to get was a state liquor license, but he couldn’t get that until he had the federal license in hand. However, he couldn’t get the federal license until he could send them a copy of the closing document.
One of the more unusual hang-ups came when Steve unwittingly got caught up in a debate between a federal field agent and an office supervisor over criteria for eligibility. Gorazd said he didn’t know whose instructions to follow. After some days of consternation, the supervisor had the last word, and the license went through with no further challenge.

“I got my federal license the day we closed, and applied the next day for my state licenses,” he said.
“He’s pretty humble,” his wife said, “but it took somebody with his background and his knowledge to work through that.”
Financing was also tough. The couple worked with Southern Illinois University Carbondale on a business plan and went to local banks for a loan, but were thwarted by a lack of winery experience.
The broker working with Holbrook put him in touch with the right source.
North Avenue Capital, a specialized commercial lender, agreed to providing a $1.6 million loan to fund the acquisitions. The operation helps aspiring entrepreneurs realize their dreams. Commercial lender, Drew Louis, led the financing company’s activities.
“Our client, Steve Gorazd, found a unique opportunity to acquire one of the region’s most beautiful wineries. NAC was honored to facilitate the acquisition that preserves jobs and the long-standing legacy of a compelling cultural landmark in southern Illinois,” said Louis.
NAC underwrote and funded the loan through the United States Department of Agriculture Rural Development Business & Industry program with packaging support from Patrick Kenney and Guaranteed Lending Specialists.
Winery operations have their romantic side, but they also require a lot of work. Angela said she was thinking about “the appeal” one day recently when she was sweating as she was folding laundry for the 10 cabins on the property, known as the Silent Forest Retreat B&B.
“We’ve worked hard our whole lives,” she said. Steve, who has an MBA, ran his own home construction business for 12 years while also working at Boeing. She put herself through school to get a doctorate in nursing, and this month is going to work for BJC Medical Group in Alton.
She is 51 and he’s 53 and they figure to have the winery long enough to pass it along to their family, which includes two grown sons, who are “very interested” in being involved, she said.
They live west of Lebanon, which is not far from the winery. She’s a native of Belleville and he’s a native of East St. Louis and raised in O’Fallon. They’ve been married more than 30 years.
The couple said they’d always had a passion for wine and frequently visited wineries in places like Napa and Sonoma, Calif.
“It became our passion,” Angela said. “Some people call us wine geeks.”
Hidden Lake was opened in 2004 as a small winery, but the previous owners added to it over the years, with a tasting room and later with event space as wine production grew. All of the buildings, including a spacious two-level home now used for events, was built during the previous ownership.
In all, there are five venues for weddings, receptions and parties, including a winery, a banquet center, the bed and breakfast lodgings, a waterfall, a large gazebo and the two lakes. Gorazd said there are around 185 weddings a year.
Steve said the couple is planning to invest some $400,000 to $500,000 in changes during the first year.
A former tent on the property is now being replaced with a 5,500-square-foot, indoor/outdoor pavilion where events can be hosted.
Additional, state-of-the-art equipment is being purchased that will allow for double or triple the current production. Most of the wine produced has been just enough for the winery itself, but Gorazd wants to become a manufacturer’s agent, to become a supplier of restaurants, stores and bars.
They have their own brand of wines, Hidden Lake Wines, but also a feature called Wines of the World, offering a wide assortment to fit a variety of palates.
Chef Wes Ronan has introduced a new, higher-end menu and is actively working on wine-pairing dinners that have proven popular.
Wineries depend on word of mouth and the event coordinator, Ashley Deiters said the phone has been ringing off the hook since the transition. Longtime hands at Hidden Lake said last month was the busiest July they’d seen.
The winery has five full-time employees and about 45 part-timers.
Before the purchase was complete, the Gorazds were allowed to plant 1,900 grapevines on the land, in order to get a jump on the next harvest. Of the four acres of vines, two were for vidal blanc grapes, and there are one each for cabernet franc and limburger.
“The (latter two) are French varietals that traditionally don’t do well in this climate but we think they’ll do well in this zone. We’re going to push the limit and hope they do well. There’s other vineyards in this area that have been experimenting with these grapes in smaller quantities,” Steve Gorazd said.
Cory Kunkel is the winemaker. Zuckerbach Vineyard, located near Hidden Lake, supplies most of the grapes for the wines produced there.
Thirty-five of the acres at Hidden Lake are sharecropped, and a big stress is placed on stocking with local produce and cheese products from places like Cooley Farms near Carlyle and Marcoot Jersey Creamery in Greenville.
An eclectic group finds its way to the facility, from Corvette clubs to yoga clubs to horse and buggy riders. Attendance is heavy on the weekend and the new owners are considering various events for midweek, like retreats.
A Family Fun Day is set for Sept. 10.

Highland tackles the soft skills of its workforce

Drone footage in the picture with new HBA marketing program

POINT: Should telecom firms be allowed to end landline service?

COUNTERPOINT: Should telecom firms be allowed to end landline service?