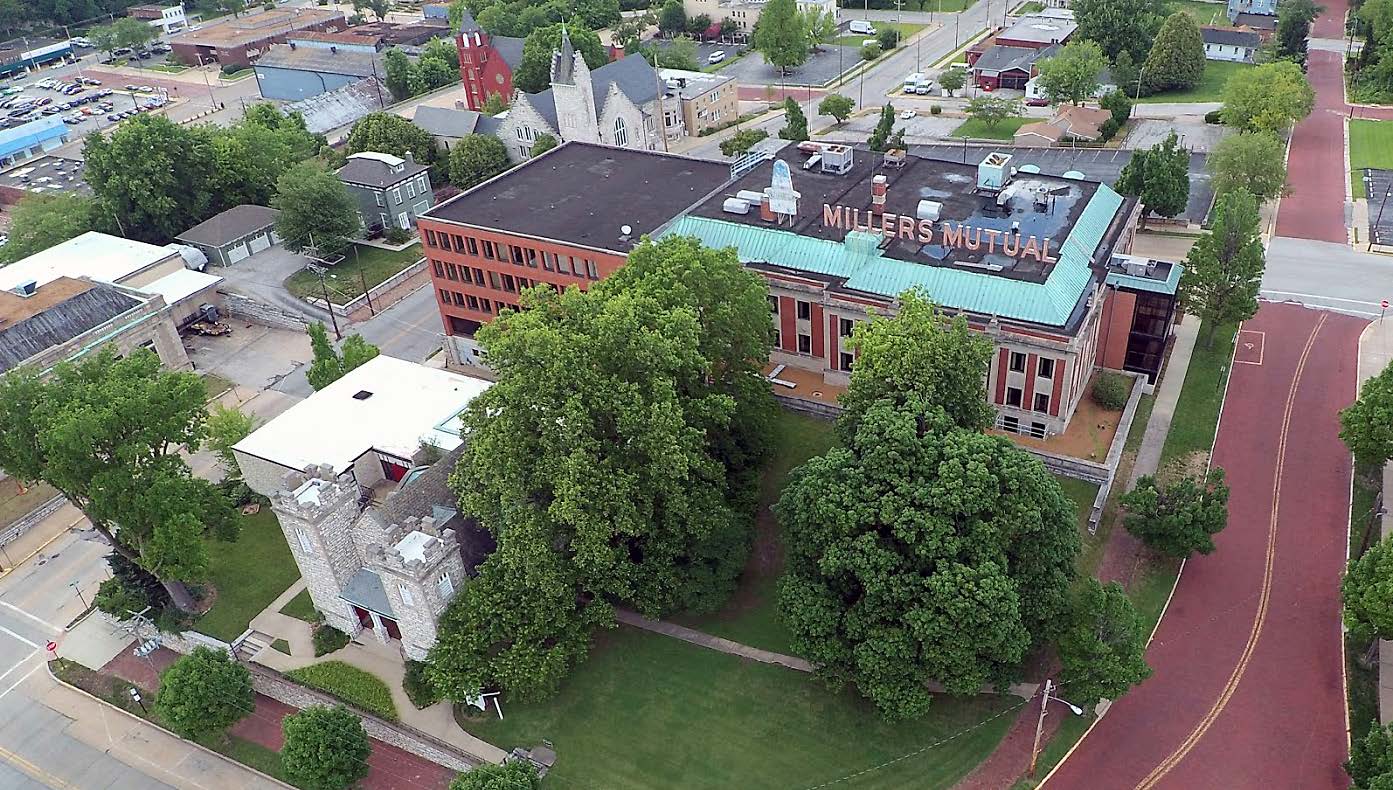 By DENNIS GRUBAUGH
ALTON — A partnership led by attorney John Simmons hopes to transform a largely vacant, Alton landmark into a thriving professional building.
Simmons is the lead partner behind Giant City Properties, a property management firm that recently purchased the historic Millers Mutual building on East Fourth Street, between Easton and Alby streets.
Giant City is principally owned by Simmons, founder of the nationally known Simmons Hanly Conroy, a law firm headquartered within view of the 110,000-square-foot Millers building.
Much of the interior is an amalgam of offices that once served the insurance company, which was placed under state supervision in 2012 before eventually going out of business. At the time, the company was doing business as Millers First Insurance Co.
Giant City Properties acquired the building for $950,000 from the Office of the Special Deputy Receiver, which represents the Illinois Department of Insurance.
Most people remember the building because of the iconic, large windmill that once fronted the building, but was long ago removed. The structure remains in sturdy shape and offers one of the best views of any in Alton. Visitors can see the Gateway Arch from fourth-floor windows. The building was open for a special tour during a recent Business after Hours of the RiverBend Growth Association.
Giant City Properties was formed in 2011 when the Simmons firm purchased the former Smurfit-Stone headquarters building at One Court St. The name Giant City reflects the hometown of the Alton Giant, Robert Wadlow.
Adamitis is chief operating officer of Simmons and is handling many of the details involving the new property.
“This is really John Simmons’ vision,” Adamitis said. “He lives in Alton. He’s a local guy. He really wants to revitalize this area.”
Giant City Properties, in addition to remodeling the Smurfit-Stone property, purchased the former Dixon Distributing building in Godfrey and owns a handful of homes in the Alton/Godfrey area.
“We’re always looking to sell or rent, and we are always looking for other properties,” Adamitis said. “Our goal is to improve the area.” 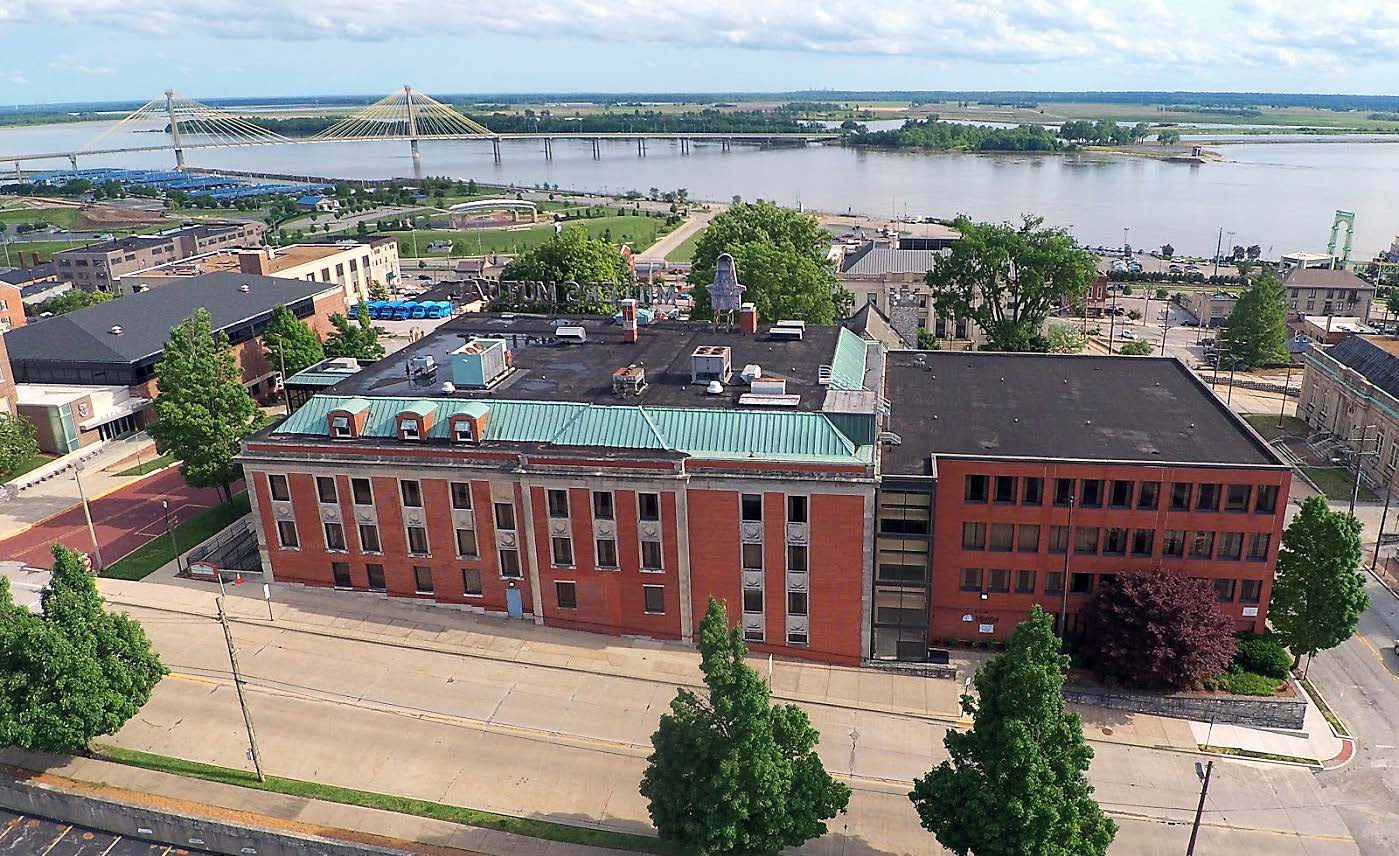 Dixon is being leased to Iron House Cross Fit, and the law firm rents some of the space for storage. AdVantage News also has space there.
The Millers property was a two-story house before it was converted in 1927 to serve the company, which began years before, insuring milling operations. Additions were built in 1935, 1955, 1967 and 1977.
Giant City Properties plans to put “significant investment” into rehab, abatement, buildout and upgrades that will include a new roof, elevator service and other work to suit tenant needs, Adamitis said. The upgrades will begin this month.
“We are committed to turn this building into a great place to do business in Alton and a great place to come to work every day,” he said.
There are four existing tenants in the building — Alton Securities and Asset Advisors, Crane Insurance Agency, A&S Kinard (a trucking and logistics firm) and Land of Lincoln Legal Assistance Foundation.
“Our No. 1 goal is to keep all four of them,” Adamitis said. “We have about 20 percent to 25 percent rented right now and within the next 12 months we want to have it 100 percent occupied. We’re looking for all businesses, large or small. The perfect scenario will be to get one 20,000-square-foot tenant on that fourth floor, which has incredible views. But we may have to break that up into two, 10,000-square-foot pieces or four, 5,000s, whatever we’ve got to do. If somebody’s willing to sign a long-term lease, we’ll completely gut it and build to suit.”
The building has four floors, a basement and a rentable attic that would be great for an art space, he said.
A former kitchen/cafeteria area on the first floor would make a perfect small restaurant, given the right vision, he said.
“We’ve got 250 employees at the law firm right across the street and we’ll probably have another 250-300 employees at this building, not to mention all the other traffic from Downtown Alton,” Adamitis said. “It would be a great place for a breakfast and lunch restaurant with plenty of parking”
For the right price, the naming rights are also available for the building.
“We’re very serious, coming across the Clark Bridge, an illuminated sign would be a phenomenal advertisement for somebody,” he said.
Furniture that remains in the building may become part of lease terms with future tenants or it may be donated to charity, Adamitis said.
Anyone wanting more information can contact him at tadamitis@simmonsfirm.com.