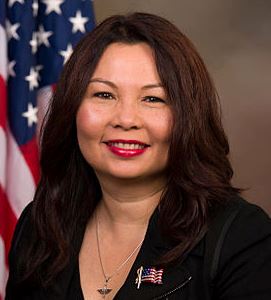 Duckworth’s new bipartisan bill would support Illinois jobs and protect infrastructure projects from needless bureaucratic delays by rolling back what she called a misguided U.S. Department of Transportation rule that enables the governors of Wisconsin and Indiana to delay or block infrastructure improvements around Chicagoland.

“When I was sworn in as Illinois’ newest U.S. senator, I said I was eager to get to work on common-sense solutions for Illinois families that members on both sides of the aisle can agree on,” said Duckworth. “My first Senate bill and its swift, unanimous passage today shows that I was serious, and I’m honored every single one of my colleagues—and especially Senators Durbin, Capito and Young—worked with me. … Red tape shouldn’t hurt our economy or stifle job growth, we needed to roll back this misguided MPO rule. I’ll keep working to support hard-working Illinoisans and help grow good-paying Illinois jobs.”

The bill now goes to the House of Representatives, where Chicago area Rep. Dan Lipinski is sponsoring the companion measure. Since arriving in the Senate, Duckworth has made repealing this rule a priority. She highlighted this issue while questioning U.S. Secretary of Transportation Elaine Chao during her confirmation hearing before the Senate Commerce, Science and Transportation Committee, video of which available here. She also held a roundtable with elected leaders and transportation officials in Chicago recently to discuss why the rule should be repealed.

The DOT rule that Duckworth’s bipartisan legislation would repeal, called the “MPO Consolidation” rule, went into effect on Jan. 20. It requires Metropolitan Planning Organizations to merge with their counterparts in other states if they are designated by the U.S. Census Bureau as sharing an urban area. Functionally, it will require the Chicago Metropolitan Agency for Planning to merge with MPOs in Wisconsin and Indiana, which would require any federal transportation funding for the Chicagoland region to be approved by the Governors of Wisconsin and Indiana.