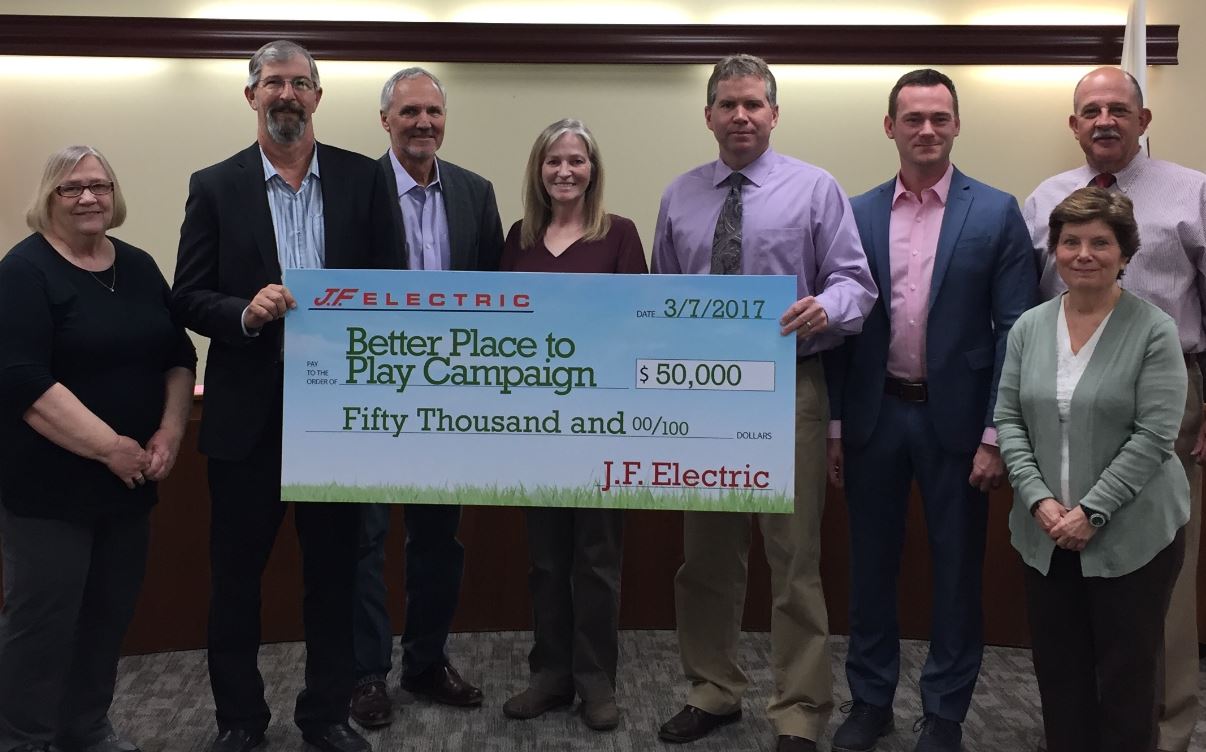 Greg Fowler (second from left) holds a check with Mayor Hal Patton representing a $50,000 donation made by JF Electric to the “A Better Place to Play” campaign.

EDWARDSVILLE — J.F. Electric has presented a donation in the amount of $50,000 to the “A Better Place to Play Campaign” in support of the Plummer Family Sports Park. It’s the second $50,000 donation the electrical contracting company has made to the campaign, totaling an investment of $100,000.

The Plummer Family Sports Park will be located near the I-55 corridor in Edwardsville and will provide state-of-the-art facilities for various outdoor sports like baseball, softball, soccer and potentially more.

Greg Fowler of J.F. Electric is excited about the partnership with the City of Edwardsville for the A Better Place to Play campaign.

“We wanted to step up and do what we could to make the Sports Park a reality for our community. Supporting our local youth and their interests in sports is an important investment and one that we plan to support even further in the future.”

The “A Better Place to Play” campaign was created in 2015 to raise community funds to help develop three new parks in Edwardsville. Last summer the first of the three parks opened leaving only the Plummer Family Sports Park and proposed Ice rink /teen center on the table for development.

“JF Electric is such a wonderful community partner,” said Edwardsville Mayor Hal Patton. “As a community, we should feel so very fortunate to have a company like JF Electric committed to improving the quality of life for us all. Their investment in our campaign is a great boost to the development of the Plummer Family Sports Park project, as we are currently in the planning phase, and hoping to break ground this fall.”

Patton also placed emphasis on the new sports park being a collaboration of the community’s ideas and requirements.
“Because we want to make sure the community is involved in the planning for the Plummer Family Sports Park, an online survey is available to offer suggestions for its development,” he said.

People can find the survey on the A Better Place to Play website at http://www.betterplacetoplay.com. There is also a sports park steering committee leading the charge.

Patton indicated that grant funding, such as the Metro East Park & Recreation District grant, and sponsorships make up a large percentage of the funds needed to build the Plummer Family Sports Park and proposed Ice Hockey Rink/Teen Center.

Donations noted to the campaign may also be mailed to Edwardsville Community Foundation at P.O. Box 102, Edwardsville, IL 62025.