SHILOH — The Realtors Association of Southwestern Illinois released the May 2016 housing statistics today, with St. Clair, Monroe and Randolph counties all reporting a higher number of home sales in May 2016 compared to April 2016.

Realtors in St. Clair County also sold 14.3 percent more homes this May compared to last May 2015. St. Clair County continued its record selling trend by selling the highest number of homes sold in May 2016 over the last five years in May.

Homes sales in Randolph County increased 41.7 percent in May 2016 compared to May 2015, resulting in the highest number of homes sold in May 2016 over the last five years in May. Compared to April 2016, Realtors in that same county sold 21.4 percent more homes in May 2016. In that same comparison, Monroe County reported a 28.9 percent increase in home sales. An increase in year-to-date home sales was also recorded for Monroe and Randolph counties.

“The strong and steady growth of home sales in the Metro-East is a positive sign for our communities,” said Doug Payne, president of the Realtor Association of Southwestern Illinois.

Homes are selling quickly, averaging around just two months on the market statewide, according to the Illinois Realtors. REAL, the Regional Economics Applications Laboratory Institute of Government and Public Affairs at the University of Illinois, said statewide home sales and median prices are expected to increase this summer. Statewide, the institute projects that the median home price will rise 7.4 percent in June, 9.9 percent in July, and 10.7 percent. 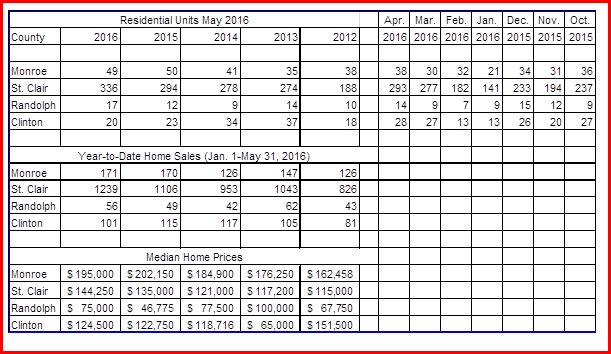 Statistics are provided by MARIS and the Illinois Association of Realtors.