CHICAGO — Senior Services Plus of Alton is among a coalition of 64 Illinois-based human and social service agencies and companies that filed suit Wednesday against Illinois Gov. Bruce Rauner and the directors of six statewide agencies seeking immediate payment in full of more than $100 million owed for work performed under contracts that date back to July 1, 2015, the beginning of the state’s current fiscal year.

A link to the lawsuit can be found at www.paynowillinois.org/legalaction.html.

The group calls itself Pay Now Illinois. In seeking a permanent injunction and declaratory judgment, the suit, filed in Cook County Circuit Court, charges that the governor and other state officials have acted illegally by failing to make payments on contracts while continuing to enforce them.

The suit also claims that the governor’s veto of certain appropriation bills on June 25, 2015, was an unlawful impairment, or interference, with the agencies’ constitutional right to a legal remedy for the non-payment of these contracts. State agencies signed contracts with the social services providers, in some cases even after the governor’s veto of the budget. The value of unpaid contracts for the members of the coalition exceeds $100 million.

The coalition members, who provide services including housing for the homeless, health care, services for senior citizens, sexual abuse counseling, and programs for at-risk youth, face “acute financial hardship.” Many have reduced staff and programs, and the viability of some of the organizations is threatened.

“The governor vetoed appropriation bills, and then his Administration entered into contracts for those same services,” said Durbin, who is also chief executive officer of Illinois Collaboration on Youth, a statewide network of organizations providing services to at-risk youth and their families. “The state agencies have enforced these contracts, and have never suggested suspending or terminating them. They can’t simultaneously have us enter into a contract and perform services and then say there isn’t money to pay for them. The state has been having its cake and eating it too. That is just not good business.”
For more information, visit paynowillinois.org.

The Pay Now Illinois Coalition is made up of 64 human and social service agencies and companies serving men, women and children throughout the State of Illinois. The members of the coalition provide a broad range of essential services, including healthcare, housing for the homeless, services for senior citizens, sexual abuse counseling, and programs for at-risk youth. www.paynowillinois.org 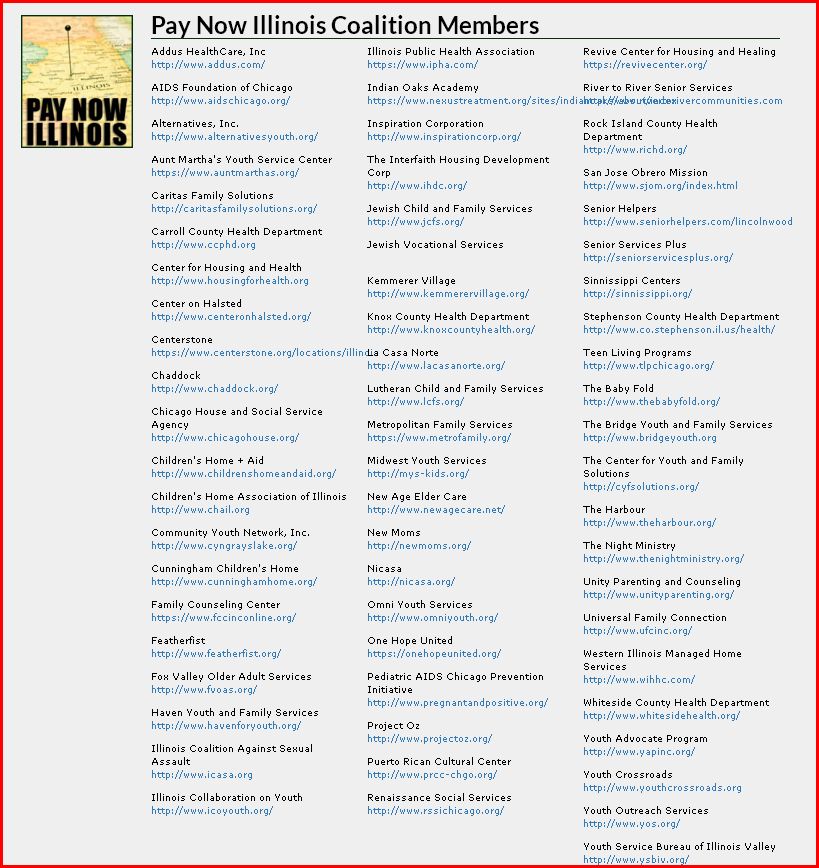