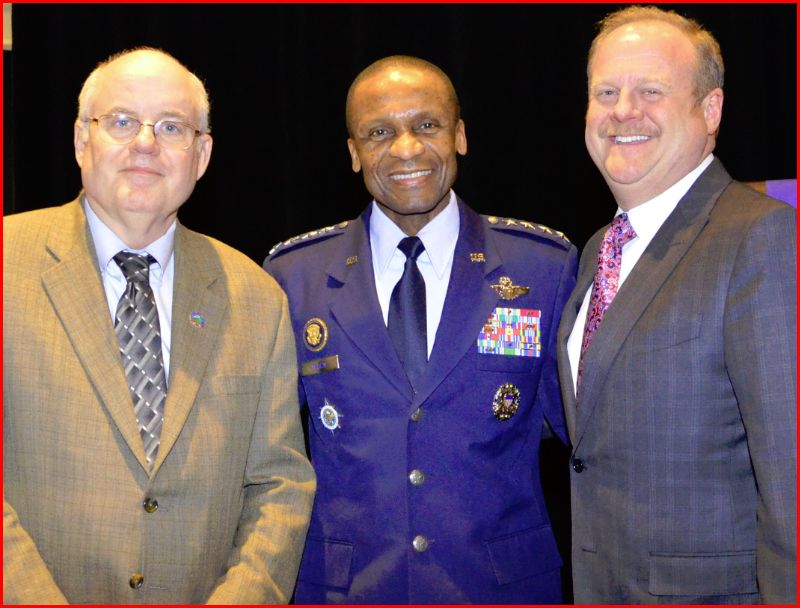 FAIRVIEW HEIGHTS — Gen. Darren W. McDew was the guest at a Feb. 10 reception celebrating his recent appointment as commander of the U.S. Transportation Command at Scott Air Force Base.

McDew, who assumed his new command this past August, spoke to business and civic leaders from the Bi-State region about the work USTRANSCOM does within the military and shared his appreciation for the community support the region provides for the men and women at Scott AFB.

In 2002, McDew first served at Scott Air Force Base as commander of the 375th Airlift Wing and installation commander for the base. He returned for a year as the vice commander of the 18th Air Force in 2006. His most recent tour at Scott Air Force Base began in 2012, and he has held three different command positions since, including his current appointment as commander of the U.S. Transportation Command. Other key staff assignments away from the base include serving as a member of the Air Force Chief of Staff Operations Group, chief of the Air Force Senate Liaison Division and the director of Air Force Public Affairs. His joint staff assignments include Air Force aide to the President and his position as vice director for Strategic Plans and Policy at the Pentagon in Washington, D.C.

McDew is a command pilot with upwards of 3,300 hours of flight experience, and he has received numerous esteemed military awards during more than 30 years of decorated military service. His distinguished career will be an asset to him during his time as the Commander of USTRANSOM, which is the single manager for global air, land and sea transportation for the Department of Defense.

“The commander of USTRANSCOM plays a crucial role in times of war and peace, and there is no one more capable than General McDew to undertake the far-reaching responsibilities associated with this position,” commented Mike Leopold on behalf of Leadership Council Southwestern Illinois’ Military Affairs Committee. “It is wonderful to be able to come together in celebration of his new post at Scott Air Force Base and to show our continuing gratitude for the general.”