PHOTO:  Michael A. Lawder, right, an attorney with Anderson & Gilbert, L.C. in St. Louis, receives a check for his clients from Treasurer Kurt Prenzler.

EDWARDSVILLE — A fortune left behind by a millionaire maiden was distributed on Monday to her long-lost heirs.

Madison County Treasurer Kurt Prenzler said he was issued an order by the court to pay the heirs in Mary Petroff’s $1.36 million estate. Four dozen family members from Granite City to Bulgaria will receive the money left behind by the 97-year old woman who died in 2011. 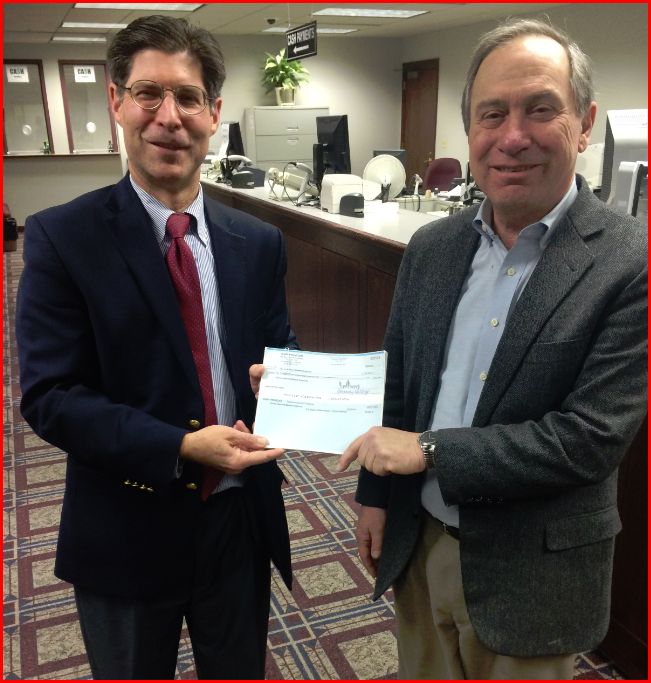 Petroff was the daughter of Bulgarian immigrants who arrived in Granite City in the early 1900s. Her father worked as a laborer and it’s where he and his wife raised Mary and her sister, Anne.
Neither sister married. In their 90s they began to suffer from dementia and were appointed a legal guardian.

When Anne died in 2009 her estate passed on to Mary. Both sisters lived a modest life.
After Petroff’s death the state of Illinois discovered she was a millionaire with no known heirs or will.

Prenzler said following Petroff’s death her estate was placed with his office for safekeeping. He said under Illinois law unclaimed monies are kept in the county for a period of 10 years before it’s turned over to the state.

“This is what happens when there are no known relatives and a person dies without a will,” Prenzler said. “In Mary’s case there were people who stepped forward claiming to be relatives and the court determined last month their familial relationship. (Monday) my office cut checks for 48 relatives.”

“The largest amount of the estate is going to relatives in Bulgaria,” Prenzler said.

Michael A. Lawder, an attorney with Anderson & Gilbert, L.C. in St. Louis, came into the Treasurer’s Office to pick up the checks for his clients, the majority of whom are from Bulgaria. He said laws regarding estates/escheat are different in each state and had Mary Petroff lived in Missouri the likelihood is the distribution would have gone to fewer family members.
A portion of the inheritance will stay in this country and go to family members in Madison, St. Clair and other counties in Southern Illinois.

Prenzler said the Petroff story serves as a reminder to the living to do estate planning.