PHOTO: Representatives of the honored organizations and businesses hold their Captains of the River Bend awards.

The award was created by the RiverBend Growth Association to identify and honor the many ways in which local organizations have enhanced the region. The awards are presented to businesses, bodies of government and individuals that have demonstrated an outstanding commitment to public enhancement, community service and /or economic enhancement of the region. 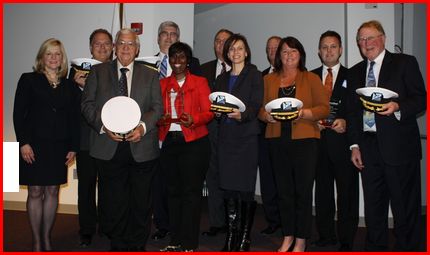 Here is a recap of the honors bestowed this past Thursday at the annual luncheon held at Lewis and Clark Community College:

– The Captain Award for economic enhancement was awarded to the Alton Regional Convention & Visitors Bureau and was accepted by Brett Stawar, president and CEO. The agency for honored for its impact to the region, said to be more than $20 million in visitor expenditures, 40 new jobs created, a $1.2 million increase in sales tax and local tax receipts of $540,000. The organization serves Calhoun, Jersey and Madison counties.

– Joelle Shearin, general manager of Argosy Casino in Alton accepted the award for Economic Enhancement and
Community Involvement. The Alton Belle Casino was the first casino in Illinois. Argosy has contributed millions of
dollars to the local economy, especially to the city of Alton. Penn National Gaming owns 20 facilities across the
country and continues to invest in its Alton facility. Most recently, Argosy completed the remodeling and rebranding of its restaurant, Journey and is in the process of updating other parts of the facility.

– Challenge Unlimited’s award was accepted by longtime CEO Tom Moehn, who is retiring early next year. The agency’s largest recent accomplishment was the conceptual idea and creation of Advanced Outsource Solutions, Inc. The secondary packaging company seeks to employ people with barriers in finding employment. While AOS is a separate company from Challenge Unlimited, Challenge fully supports and provides management services. Challenge has two skills training centers that serve for production type jobs. It also provides training for the social aspects of working in the community. When client have progressed through all of the training at the skills training centers, they have the opportunity to graduate AOS and continue to train at a higher level for community employment.

– Med Resources’ award was accepted by Chris Nicholson and Jeff Braun. Although the company has been in existence since 1995, it arrived in Alton in 2013. It recently added five new jobs, increased sales by 40 percent and increased sales tax by 64 percent. It recently completed the renovation of its building on State Street and held a ribbon cutting and open house to celebrate.

– Mike Fitzgerald, principal at Scheffel Boyle, accepted its award for economic enhancement and community involvement. With more than 120 employees, Scheffel Boyle is heavily invested in improving the Riverbend through supporting, donating to, and volunteering for numerous organizations and causes. Scheffel Boyle is celebrating their 60th anniversary this year, and is the largest CPA firm in Southwestern Illinois. The River Bend is where it first planted roots in 1955 and now has nine offices in the region.

– St. Louis Regional Airport Executive Director Dave Miller accepted the award for Economic Enhancement and Community Involvement. The St. Louis Regional Airport Authority was formed in 1946 after having been used as a dirt airfield since 1928. A recent IDOT Division of Aeronautics study showed the airport has a total economic impact to the region of $135.2 million. The airport is host to many aeronautical and nonaeronautical tenants. The airport provides over 500 jobs on the airport and an additional 270 off-airport jobs.

Next year’s event will take place on Thursday, Oct. 27, and the RBGA will be accepting nominations for awards in August.