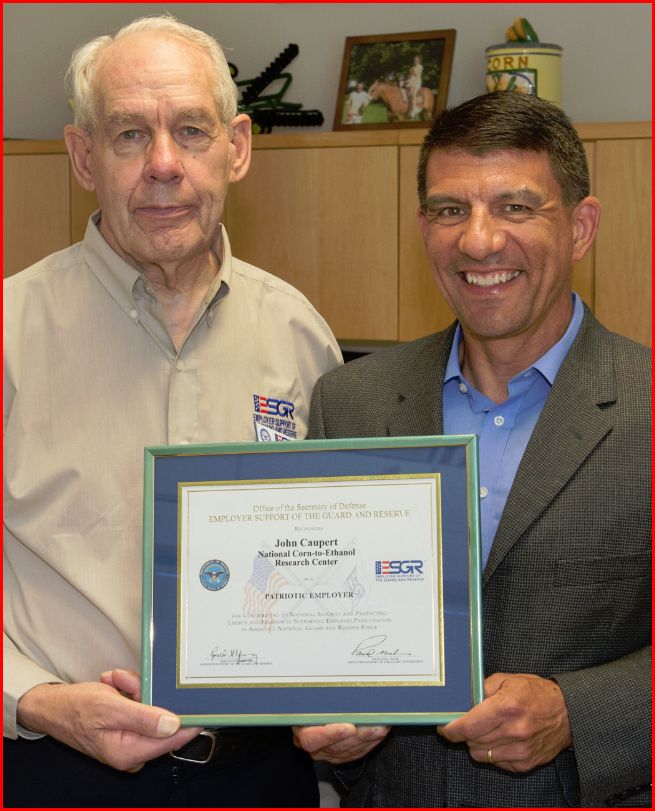 Robert Kistler, left, representing Employer Support of the Guard and Reserve, with John Caupert, director of The NCERC at SIUE.

EDWARDSVILLE – John Caupert, director of The NCERC at Southern Illinois University Edwardsville, received the Patriotic Employer Award on Wednesday from the Employer Support of the Guard and Reserve.

The Office of the Secretary of Defense authorized the award.

The Patriotic Employer Award is dedicated to individuals, who through their employer, support members of the military. A former NCERC intern, Donnell Young nominated Caupert. Young is a captain in the Illinois Army Reserve National Guard.

“I am honored that Donnell nominated me,” Caupert said. “This award is so meaningful, because I have so much respect and admiration for our men and women in uniform who protect this country and our freedom. I distinctly remember the day Donnell received his second lieutenant’s commission right here in my office.”

In nominating Caupert, Young said, “Mr. Caupert provided me with an excellent opportunity to complete an internship at the NCERC and maintain income while attending annual training and other forms of training. He also found the time to provide an excellent recommendation for my commissioning application.

“He is highly supportive of servicemen/women and goes out of his way to provide continued appreciation of those who serve. He is, without a doubt, a fine American citizen.”

Representing ESGR, Robert Kistler presented the award. ESGR develops and promotes a culture in which all American employers support and value the military service of their employees. For more information, visit ESGR.mil.

Earlier this month, Caupert was presented with the industry esteemed Award of Excellence at the International Fuel Ethanol Workshop & Expo held June 1-4 in Minneapolis. The award, established by BBI International, honors the significant contributions Caupert has made to the fuel ethanol industry through his leadership of the NCERC.

The NCERC at SIUE is a nationally recognized research center dedicated to the development and commercialization of biofuels, specialty chemicals and other renewable compounds.