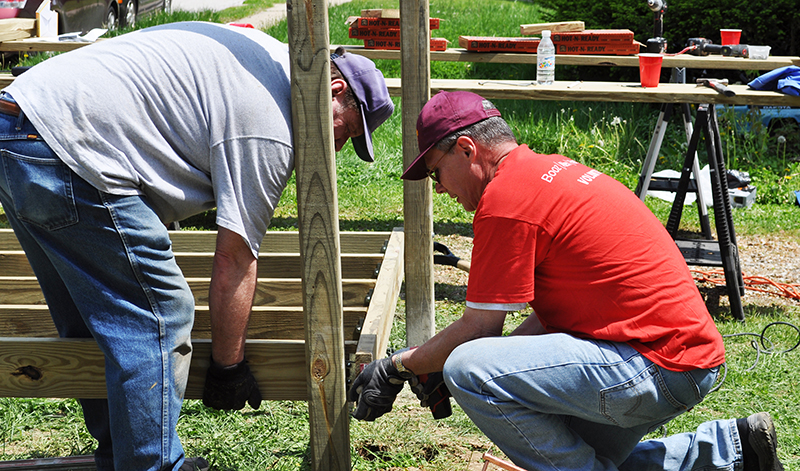 Rebuilding Together is a nonprofit organization that works to preserve affordable home ownership and revitalize neighborhoods by providing home repair and renovation services to those in need.
It was created in 1973 by a group of handymen in Midland, Texas, who decided to take one day in April of that year to help out their less fortunate neighbors. From that simple beginning, it grew into an organization called Christmas in April, later changing its name to Rebuilding Together in 1988.
While it’s a national organization, there are more than 200 local chapters including the one in Madison, Ill., that services the counties of Madison, St. Clair and Jersey. Kuleya Bruce is its executive director.
“We repair homes, focusing on safety, independence and comfort,” Bruce said. “We try to keep people in their homes in a safe environment. We focus mainly on minor home repairs like fixing or replacing porches, flooring, bathrooms, minor plumbing and electrical and roof patchwork.”
Bruce estimates that, by using volunteer labor, they are able to deliver $4 of value for every $1 invested in materials. That estimate doesn’t include the emotional side of the equation. An example is what Rebuilding Together did for a man named Carl who lives in Alton. Carl bought his home more than a half century ago and raised his family there. After some health issues landed him in the hospital for six months, he was to be released but would need the use of a wheelchair for the rest of his life. As his home was not handicapped accessible, he would have ended up in a nursing home if not for the assistance of Rebuilding Together. The organization came to the rescue, and a crew built a wheelchair ramp so Carl could once again enter his home.
“The ramp built by these nice people allowed me to get in my wheelchair, come up that ramp, and come into my home,” Carl said. “Without that ramp I would have no life. If it wasn’t for Rebuilding Together and the United Way, I wouldn’t have this ramp. If it weren’t for them, I’d be in a nursing home today.”
One of the organization’s volunteers is Chris Clements, an associate with Booz Allen Hamilton Inc., a strategy and technology consulting firm with local offices in O’Fallon, Ill.
Currently president of the board of directors of Rebuilding Together Southwest Illinois, Clements said he’s been involved with the nonprofit for more than 10 years. Booz Allen has had a long association with Rebuilding Together and after Clements retired from the USAF and joined the firm, he was quickly recruited to be on the board by his boss, vice president Gary Voellger.
“I started volunteering for these folks back when I was still active duty Air Force and I was one of the volunteers going out on job sites,” Clements said. “Then, after I retired and I joined Booz Allen, I found out they were involved with the organization and I got involved again and wound up on the board and now I’m serving as president. Most of the time when I hit a job site it’s seeing what others are doing and thanking folks for their time and efforts and making sure family members and homeowners are doing well and happy with the things that the volunteers are doing.”
Clements said he also works to recruit new board members and organize events. He said that the idea behind the name change was to break away from the idea that the projects happened just once a year. They now operate year-round. Bruce said that they completed about 60 projects last year. The number of Booz Allen employees that work on any one project ranges from a half-dozen to more than 40, according to Clements.
There is still a Rebuild Day that occurs at the end of April each year but the organization takes applications year-round, said Bruce. Projects are conducted when the combination of an eligible applicant, the necessary resources and sufficient volunteers comes together.
“The main requirements are that they own and live in their home and that they meet the U.S. Department of Housing and Urban Development low income criteria,” Bruce said. “Once they complete the application and send in all of the documentation, we give them a call and set up the meeting to go visit with them. We look at their application; we look at their home; we look at their needs such as medical, disability and health hazards in the home. We’ll look at all of that and decide if they’re a good fit for the program. Once they get accepted into the program,” Bruce added, “we match them with the resources and the volunteer groups that we have that meet their needs.”