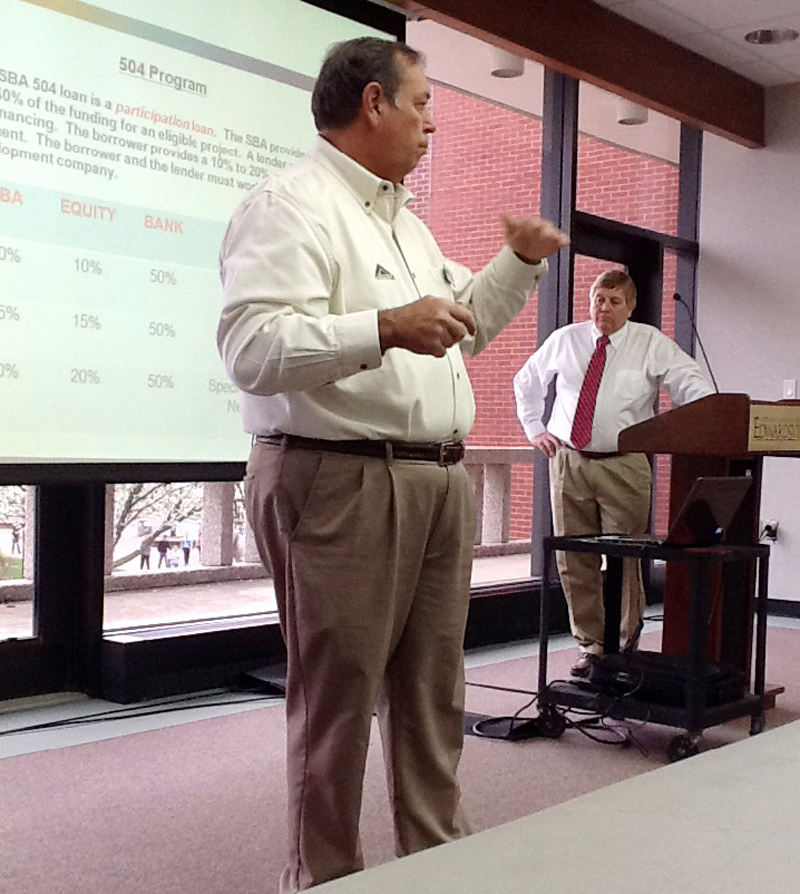 University Park at Southern Illinois University Edwardsville and the Metro East Small Business Development Center teamed up in January to host a business plan competition. First round applications and executive summaries were due Feb. 21. After review, a group of semifinalists were selected from the initial entries and asked to submit consolidated business plans that are due March 31.
The group will be further winnowed down and the finalists will make their business pitches to the judging panel of business professionals at the end of April. The winner will receive a $10,000 cash prize and the runner-up, $5,000. The award money is being provided by University Park, PNC Bank and the St. Louis Regional Chamber.
Jim Pennekamp, University Park’s executive director, said the team decided to take a page from across the river.
“When looking across the river to the Missouri side,” Pennekamp said, “we see a significant amount of entrepreneurial activity that has been years in the making. One of the mainstays used in St. Louis has been the business plan competition. Our goal is to use this successful example to identify Metro East entrepreneurs with good business ideas and give them support. At the same time, we are striving to get the word out on the importance of this activity in Southwestern Illinois.”
Pennekamp also points to the competition targeting key goals for University Park. It advances the academic mission of the university by strengthening relationships with private enterprise, while expanding learning opportunities for both students and faculty.
“The SIUE Metro East  Challenge creates the opening to engage with the region’s entrepreneurs in cultivating an important economic development strategy,” said Pennekamp.
Patrick McKeehan, director of Metro East SBDC at SIUE noted that his centers in Edwardsville and East St. Louis are celebrating their 30th year of operation.
“For three decades SBDC staff has focused on helping entrepreneurs and small-business owners start, survive and thrive,” said McKeehan, who came to the SBDC about a year ago.
The organization has always responded to entrepreneurs and small-business owners seeking counseling, business plans and resource referrals, but he and his staff decided to take a more proactive approach in 2014.
“Over the past five years we have seen a growing interest in entrepreneurship in what we refer to as the Metro West,” McKeehan said. “Venture capital funds, incubators, technology accelerators, business plan and pitch competitions, and entrepreneurial networks have proliferated and generated success. We think that the Metro East should be taking advantage of those resources, in addition to developing this vibrant entrepreneurial infrastructure and opportunities within our own region.”
McKeehan said that many of the people who visit the SBDC have experienced a “Eureka!” moment — an inspirational business idea with no idea how to make it happen. Many of these individuals lack knowledge of the challenges and hurdles of new business ownership. The barriers to overcome in starting and running a business may include financing, marketing, cash flow, cyclical sales, government regulations, employees and much more. According to the Bureau of Labor Statistics, more than half of all small businesses startups fail within the first five years.
“It can be overwhelming,” McKeehan said, “and this is one of the things they don’t talk about in terms of small business failure. Often the causes are related to cash flow issues or maybe slumping sales but, in my opinion, many times the reason is owner fatigue. It is hard on the individual that is thinking about their business 24 hours, seven days a week, 365 days a year. They get worn-out and then overrun.”
Which is why, says McKeehan, he and his staff recommend creating a strong business plan before you launch any endeavor. McKeehan also advocates building a solid foundation of professionals to support your endeavor. Just like a building, an entrepreneur needs it to have four solid cornerstones – in this case an attorney, a banker, an accountant and an insurance agent.
“With those four in place, the final foundation piece is the SBDC, “McKeehan said. “We’re your marketing adviser, regulatory advocate, business plan reviewer and source of financing referrals. More importantly, we are your loyal supporter. By having a solid team to build upon, your chances of business success are greatly increased.”
The mission of the SBDC is to improve the region’s economy, according to McKeehan. Successful business owners hire, invest, build and purchase. They also pay taxes to support public services, education and essential infrastructure — these entrepreneurial activities spread value across the community and region.
“Our focus is on the long-term effort to revive and strengthen the entrepreneurial spirit in our region,” McKeehan said. We want to find individuals who are willing to take the risk while we continue to create the infrastructure that allows them to succeed. Our goal is for these individuals to succeed here in our communities, not across the river or in Chicago or on either coast. We believe our efforts will produce new economic growth and stability for future generations. I am convinced there are a lot of people willing to join the fight and make this happen.”