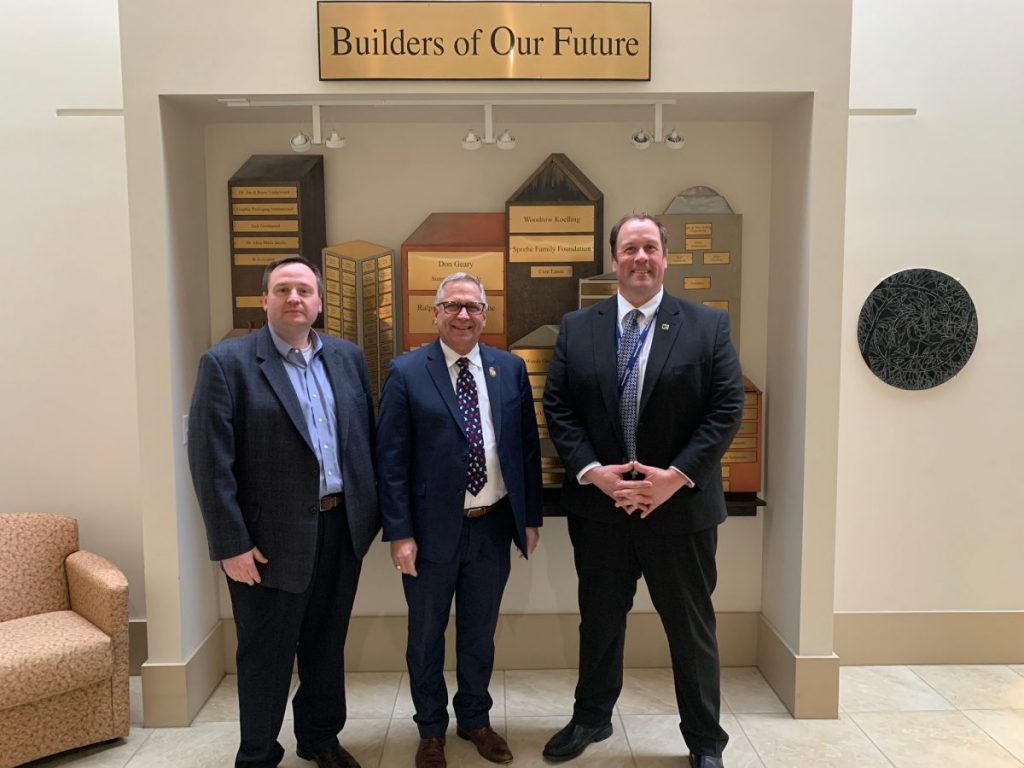 On Jan. 19, 2023, Kaskaskia College hosted several dignitaries in two separate, but very important visits.  The Illinois Capital Development Board and United States Congressman Mike Bost (IL-12) toured the campus at separate times to review the recent renovations, hear about the latest developments, and learn of the College’s recent successes.

Illinois Capitol Development Board Executive Director Jim Underwood, CDB Programming Administrator Marcy Joerger, and CDB Capital Planning Analyst Erin Eoff toured the KC main campus and were provided with an in-depth overview of the progress of the college’s Phase 1 renovations, including the newly renovated parking lots, technology-filled classrooms, and infrastructure upgrades. Members of college leadership and board members joined the tour to give insight into the improvements, as well as to highlight some of the challenges faced in their designated areas.

College Construction Manager Poettker Construction was represented by Executive Vice President Jonathan Carroll and President Ryan Poettker of Poettker Construction and Donna Richter, chief executive officer of the Southern Illinois Builders Association, were among the list of guests that were on hand in support of the College and highlighted the work completed contributed to a strong economic regional impact, as multiple trade unions performed the work.

Alongside the tour, KC Automotive Technology demonstrated their electrical vehicle trainer and highlighted the additional green energy developments coming to the campus in the future, pending renovations.

The tour was the first for Congressman Bost, as his district has expanded since the last election.  Congressman Bost now represents approximately 80% of the entire Kaskaskia College district.  The congressman said he uses these visits to understand better the needs of the community he represents.

KC President George Evans stated we are very thankful and appreciative of the time committed from these dignitaries to visit, tour, and hear about KC.

“It is rare to get one-on-one facetime with individuals such as these, and I appreciate the support we had internally and externally in making these visits happen,” said Evans.  “I believe it is instrumental that the Capital Development Board view first-hand the successes of the institution both from an academic and infrastructure standpoint, and I believe we accomplished the goal of highlighting both subjects during their time here. We are equally thankful that Congressman Bost took time out of his busy schedule to learn more about the college. We look forward to continuing to work very closely with him and his team, as higher education is an instrumental part of state and federal governments, and we must ensure that KC not only has a voice at the table but also, we continue to promote our highlights our successes, as they stand on their own merit.  All in all, it was a very good day for Kaskaskia College.”