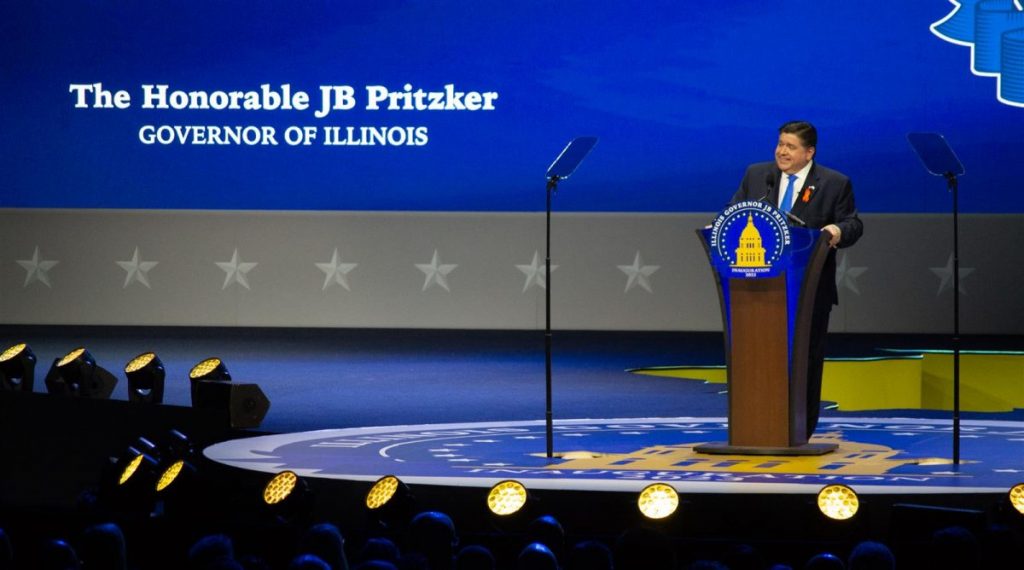 The governor and high-ranking members of his staff joined a bipartisan delegation of U.S. politicians and world business leaders with the goal of “promoting Illinois as a major player on the world stage,” Pritzker said in a call Thursday morning with media outlets back home.

“We’ve made it very clear when looking for nation-leading legislation, and leadership on fighting climate change and clean energy developments, that you don’t need to stop at the coastal states,” Pritzker added.

CEJA also set a goal of having one million electric vehicles on Illinois roads by 2030. The state is climbing steadily toward that goal, with the number of electric vehicles registered in the state increasing from 8,255 to 57,311 over the past five years.

A recent report from the union-tied Illinois Economic Policy Institute noted that an increase to 1 million EVs by 2030 could potentially cause a decrease in state and federal transportation revenues exceeding $1 billion over the next decade.

Since transportation infrastructure revenues are heavily reliant on motor fuel taxes, the revenue loss could reach $4.3 billion when factoring in increased fuel efficiency, the report noted.

When asked if he had a plan for making up the lost revenue, Pritzker said he didn’t find anything in the report “unusual” and the state continues to encourage EV adoption through tax credits.

“It’s not like Illinois is doing something that is deleterious to the future of infrastructure funding that isn’t already happening all across the nation,” he said, without identifying other potential revenue sources.

Pritzker said he has also been meeting with business and world leaders to discuss bringing more business to Illinois. In particular, he cited the field of hydrogen energy as a potential area of growth in Illinois.

On Tuesday, Pritzker visited the Wieland manufacturing facility in Vöhringen, Germany, an industry leader in manufacturing and converting copper and copper alloys.

Wieland currently has eight locations in Illinois, including in East Alton where the governor recently visited.

“I wanted to make sure they know that I’m at their service if there are things that I can do to enhance their operations,” Pritzker said. “They have many other divisions…and so bringing more of the rest of their company to Illinois is an opportunity I’d like to take advantage of.”

In a news release, Wieland CEO Erwin Mayer said the company is “contributing to the revitalization of manufacturing in the U.S.A. and serving the critical industries in the fields of semiconductors and electric vehicles.”

“We look forward to continuing the collaboration with Gov. Pritzker and his administration on further developing these critical supply chains,” he said in the release.

On Wednesday night, Pritzker said, he had dinner with the U.S. ambassador to Switzerland and the Swiss ambassador to the U.S., discussing potential business relationships.

The governor has also been touting two laws he signed last week: a ban on the state’s assault weapons and a measure protecting abortion providers and out-of-state patients, as well as gender-affirming care.

“In my state, people want to ban assault weapons. We just did that. Protect a woman’s right to choose. We just did that,” Pritzker said during a widely reported panel discussion Tuesday. “Those are not happening at the federal level and should, but we’re doing it at the state level.”

Pritzker mentioned those measures in the media call Thursday while referring to himself as the “state’s best chief marketing officer.”

“I’m making sure that people know about our leadership on safeguarding reproductive rights, on our focus on fiscal responsibility, our booming manufacturing sector and the fact that we are full of brilliant talent from our world-class universities and our nation-leading, third largest in the nation community college system.”

The governor also downplayed a Thursday morning POLITICO report that he was overheard talking at “high volume in the central lounge of the Congress Center” about his potential for a White House bid. He said the discussion that was overheard was with a reporter, to whom he was giving the same answer he frequently gives to local media outlets.

“I have every intention to serve out the four years that I just won as governor,” he said. “We have a lot of challenges in Illinois that we’re going to continue to work on overcoming and lots of success already.”

Pritzker was accompanied by first lady MK Pritzker, chief of staff Anne Caprara, and deputy governors Andy Manar and Christian Mitchell. He didn’t provide a cost breakdown, but said “much of it is covered by me personally.”

“And, of course there’s a security need, so that’s covered by the state of Illinois,” he said.