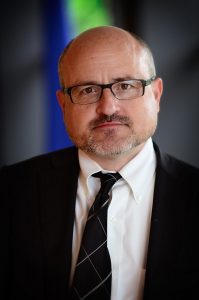 Gary Hicks, Ph.D., professor in the College of Arts and Sciences’ Department of Mass Communications and 2022 recipient of the William and Margaret Going Endowed Professorship Award.

The College of Arts and Sciences (CAS) at Southern Illinois University Edwardsville awarded Gary Hicks, Ph.D., professor in the Department of Mass Communications, with the William and Margaret Going Endowed Professorship Award, the most distinguished faculty award of the College.

A member of the LGBTQ+ community with more than 25 years of work experience as a media and communications academic, Hicks’ research has focused on the impact of media on society’s marginalized communities.

“My research covers what once were considered taboo topics whose study was clearly not valued by many universities,” explained Hicks. “There are a relatively small number of scholars who do this kind of research. I find one reason for that is the historical lack of embrace by academia.”

“While I was working on my doctorate many years ago, I was warned by several of my professors that I might have a hard time even being hired due to prejudice against my chosen research agenda,” added Hicks. “Being awarded the William and Margaret Going Endowed Professorship Award demonstrates that SIUE respects my years of research and recognizes the impact my work has on our society.”

Established by the late Dr. William Going in honor of his wife Margaret, the award is presented to a faculty member who has produced outstanding scholarship and connected that scholarship in fundamental ways to their teaching and transformed students’ lives.

“I am very pleased that Dr. Gary Hicks was selected as the recipient of the William and Margaret Going Endowed Professorship Award,” said CAS Dean Kevin Leonard, Ph.D. “Dr. Hicks is clearly deserving of this great honor. His work has made important contributions to scholarly understandings of mass media and the LGBTQ+ community while compiling an impressive record of teaching excellence.”

Reflecting on his years at SIUE, Hicks said he chose the university because of its diversity and, for many of his students, the first opportunity to intellectually reflect on contentious issues in a safe environment.

“I ensure to keep a scholar’s distance and fairness in my work,” Gary concluded. “I think that my personal experience as a gay man who grew up watching stereotyped, stigmatized and marginalized images of people like me only has served to make me more passionate about my research.”

As part of the award recognition, Hicks will be leading a lecture presentation that will be announced later in the spring semester.