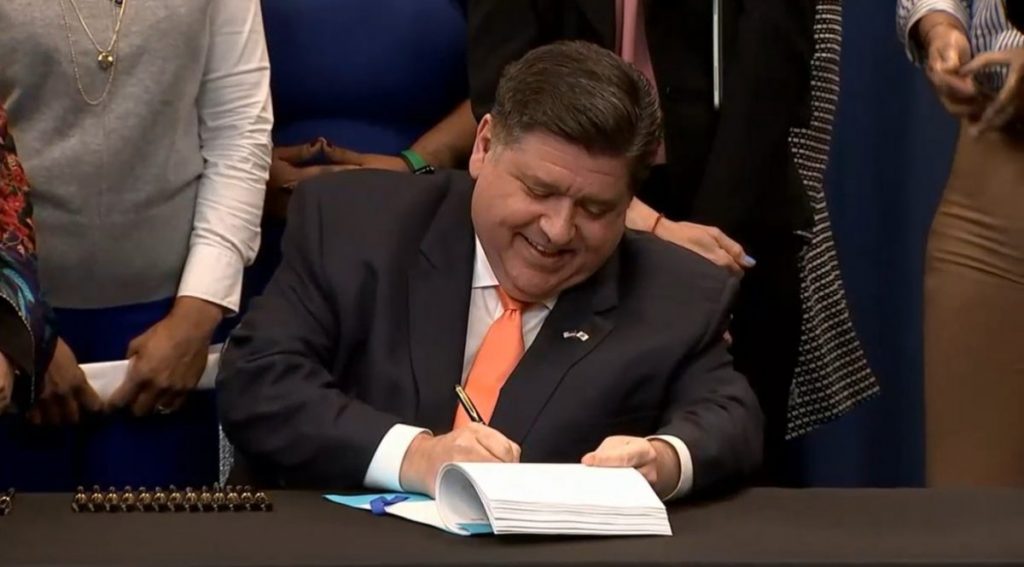 Gov. JB Pritzker signs a bill into law Friday at a ceremony in Chicago expanding access to abortion and gender-affirming health care and giving legal protections to health care providers who perform those services. (Credit: Blueroomstream.com)

House Bill 4664, passed Tuesday during the General Assembly’s “lame duck” session, came in response to the U.S. Supreme Court’s decision in June overturning the 1973 Roe v. Wade decision and declaring that the federal constitution does not protect a woman’s right to abortion.

That decision triggered the reinstatement of long-dormant laws in other states that either banned or imposed severe restrictions on the procedure and prompted other states to impose new restrictions, resulting in a wave of patients from those states seeking services in Illinois, where abortion remains legally protected.

“The U.S. Supreme Court has forced women, especially those most marginalized, to flee their home states in search of safe health care,” Pritzker said at a bill signing ceremony in Chicago. “Here in Illinois, we know we have an obligation to support and protect reproductive freedom for our residents, and those who seek safe haven. And we must protect our doctors and nurses to the right to reproductive health care that has been the law of the land in Illinois and across the nation, really, for 50 years.”

The bill aims to address the increased demand for abortion services in Illinois by expanding the list of providers qualified to perform the procedure to include advanced practice registered nurses and physician assistants when general anesthesia is not required. It also provides an expedited process for healthcare providers licensed in other states to obtain temporary licenses to practice in Illinois.

The bill also provides legal protections to healthcare providers who are sanctioned in other states if those sanctions are based solely on the fact that they performed a medical procedure that is legal in Illinois. That includes abortion services as well as “gender-affirming” treatments for transgender individuals.

It also guarantees that abortion medications, HIV prevention drugs known as PEP and PrEP, and gender-affirming care will be covered by state-regulated insurance plans at no extra cost to consumers and requires local government employers to offer insurance plans that provide coverage for these treatments, as well as for birth control.

“Last year when the Supreme Court took away our freedoms, when they overturned Roe, Illinois immediately felt the impact as state after state moved to ban or severely restrict abortion access,” Jennifer Welch, president and CEO of Planned Parenthood Illinois, said during the event. “Sometimes it looks like a race to the bottom in our neighbor states. And those same states are hostile to the LGBT community, restricting access to gender-affirming health care, equality, marriage equality and many other rights.”

The new law takes effect immediately upon the governor’s signature.