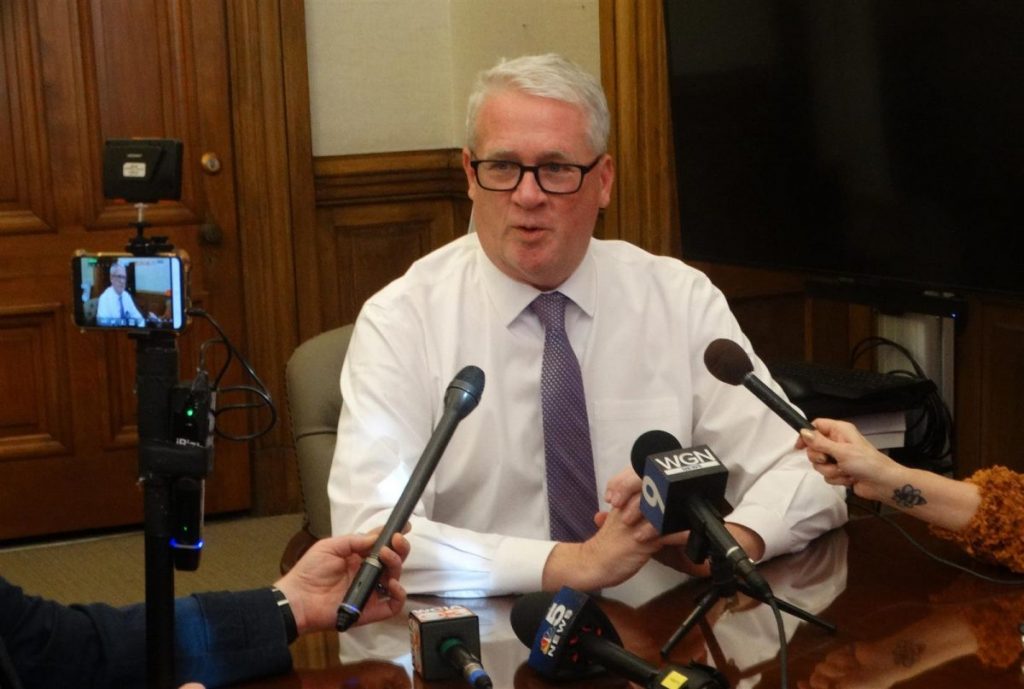 Outgoing House Minority Leader Jim Durkin (R-Western Springs) is pictured in his Capitol office, where he held a final news conference Tuesday before stepping down from the General Assembly effective at the end of the day. (Capitol News Illinois photo by Peter Hancock)

After a bruising 2022 election cycle in which House Republicans lost five seats, Durkin did not seek another term as leader of the caucus. But on Tuesday, the final scheduled day of the 102nd General Assembly, he resigned his seat altogether, and he left with some less-than-complimentary words for his own party.

“When you’re in Springfield, numbers matter, and this is a game of addition. And unfortunately, we’ve been playing the game of subtraction on a statewide level,” he said during a final news conference in his Statehouse office. “And that’s not going to help this party.”

Durkin was first appointed to the House in 1995, a time when Republicans were highly competitive in the Chicago suburbs and other parts of Illinois. He chose not to run for reelection in 2002 when the decennial legislative remap plan put him in the same district with another Republican, instead making an unsuccessful run against Democratic U.S. Sen. Dick Durbin.

In 2006, Durkin returned to Springfield via another appointment by party leaders before being elected to the 82nd District seat. His successor will be chosen in that same appointment process, a method Durkin acknowledged isn’t perfect but contended is better than holding a special election.

A self-described moderate Republican, Durkin twice served as the Illinois chairman for U.S. Sen. John McCain’s presidential campaigns. But during his time in office, he witnessed the national GOP move further to the right and the base of the state party move further toward southern Illinois – a move that at times put him at odds with his own caucus.

Most recently, he was the only Republican in the House to vote in favor of an assault weapons ban Tuesday.

“I’ve been called a RINO (Republican in Name Only). That’s fine. I wear that as a badge of honor. It’s kind of funny,” he said. “But if they really looked at my voting record, it doesn’t reflect that.”

Durkin said that as his party became more conservative, it also became more intransigent and less willing to compromise on key issues, even to the point of punishing members who did not measure up to what he called a “purity test” imposed by conservatives.

“Again, this purity test that some of the people in this party demand, it’s just … it’s nonsense,’ he said. “It’s absurd. And it’s going to further damage the Republican brand.”

The split between Durkin and the conservative wing of the party was evident during the 2022 election cycle when Durkin refused to endorse state Sen. Darren Bailey’s campaign for governor. During the primary, he endorsed Aurora Mayor Richard Irvin, but Bailey ended up winning the nomination, only to lose to incumbent Democrat JB Pritzker by 12.5 percentage points.

But it was also evident in his public criticisms of former President Donald Trump, whom Durkin blamed for much of the party’s losses in 2022.

“You know, he had an opportunity to do good things, but he turned into a bully,” Durkin said. “And he doesn’t understand that there’s a Constitution which requires a peaceful transition of the office. He just can’t get over it. But he is a person that still gets into the minds of so many people throughout the country, and it’s wrong.”

Durkin said he plans to return to his private law practice in the Chicago area, but he also plans to continue giving speeches and offering his opinions on issues he thinks are important.

As for the future of the Illinois Republican Party, Durkin said he sees plenty of young talent within the House GOP caucus, including some who are leaving office.

He pointed specifically to people that were part of his leadership team – outgoing Rep. Tom Demmer, of Dixon, who ran unsuccessfully for state treasurer; outgoing Rep. Avery Bourne, of Morrisonville, who ran unsuccessfully for lieutenant governor; Rep. Ryan Spain, of Peoria; and his successor in the leader’s office, Rep. Tony McCombie, of Savanna.

“What’s really important for me has been to develop young talent,” he said. “It didn’t work out for Tom or Avery, but I still consider them the future of the party. They’re young. They brought a lot to the table. They were well-liked, well-spoken and respected. And I still hope that those two and Ryan and Tony all have something to offer the state on a larger scale.”