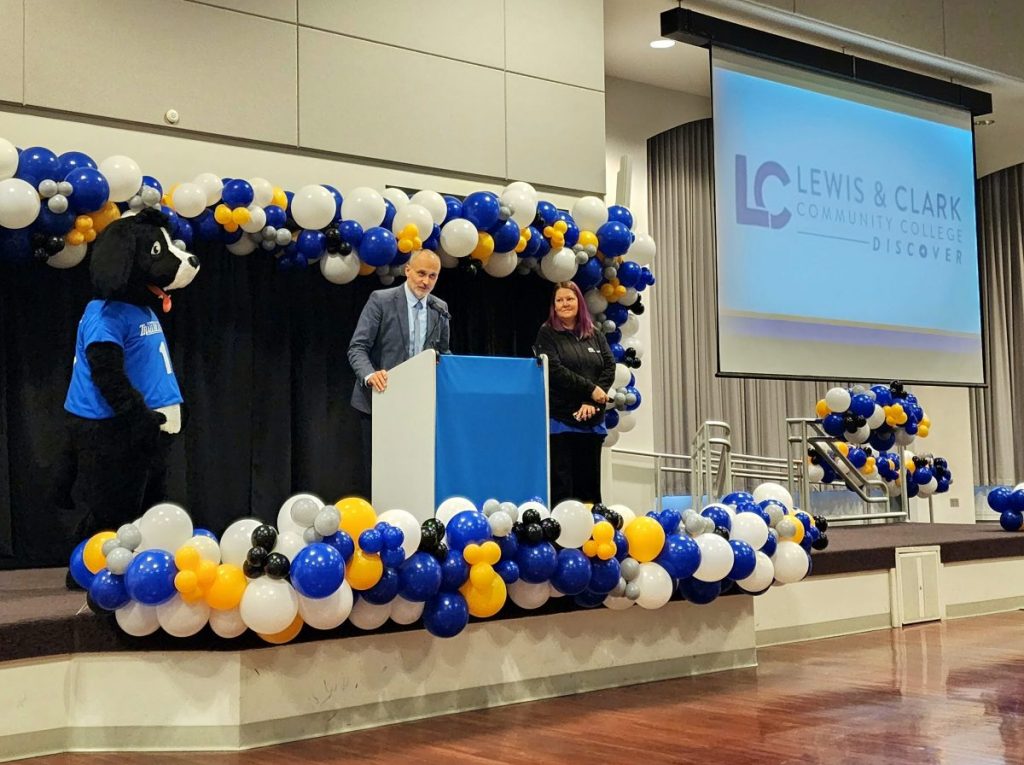 These photos show off the celebration atmosphere at the Dec. 12 brand launch party hosted by Lewis and Clark Community College. More than 200 attendees gathered to celebrate a new look and feel, and a new manifesto, all as a part of a two-year look at where the college has come from and where it wants to blaze its next trails. Blazer the Newfie, the college’s mascot, took to the stage along with L&C President Dr. Ken Trzaska and Manager of Marketing & PR Laura Inlow. Signage along Godfrey Road also revealed the new logo and look as a part of the celebration. (All photos by Melissa Crockett Meske/Illinois Business Journal) 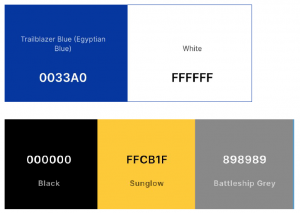 For more than 50 years now, Lewis and Clark Community College has been a vital member of the communities it serves. And for most of those five-plus decades, it has had a sculpted look and feel about it that had been unchanged.

As a party to celebrate the finality of a two-year long project got underway in The Commons on that Monday afternoon, Lewis and Clark publicly revealed new branding for the college that includes a clean and modern logo design and the addition of new colors to L&C’s official palette. More than 200 guests, including students, team members, and members of the community took part in the brand launch celebration.

The new look has gone sans serif: It consists of a new Raleway open-source typeface family that will be featured throughout its suite of new logos. New colors of black, battleship grey, and a yellow-based sunglow have been mixed in with the iconic “Trailblazer” Egyptian blue and white that the college has been identified by for decades. 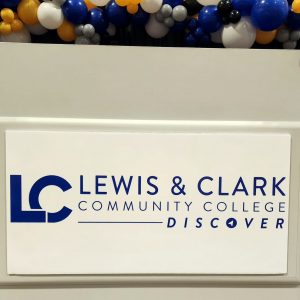 “Lewis and Clark has been a staple of our communities for more than 50 years, and for all or most of it – our branding has been the same,” said L&C Manager of Marketing & PR Laura Inlow. “Meanwhile, the college is always growing and changing – looking for new ways to innovate and expand access to students. We felt it was time that our branding more effectively reflect who we are as a student-focused, forward-thinking institution.”

Inlow noted that the previous logo was hand-drawn initially. The new logo has been fully digitalized, another nod to its crisp and modern look and feel.

T-shirts and bumper stickers were given to those in attendance that sported the new Lewis and Clark Community College brand while also underscoring the college’s new brandmark: Discover.

This brandmark is accompanied by a path-indicating, upward-facing arrow to be used as a graphic brand element whenever appropriate.

Other items were also on hand to take in and enjoy, including some specially-designed cookies provided by Alton’s Duke Bakery topped with the new look of the “LC” monogram.

“We are honored that so many people came to celebrate this momentous occasion with us today,” said President Ken Trzaska. “We’re looking forward to many great days ahead – including a reimagining of the college’s Main Complex.”

The new feel behind the brand is supported by the college’s newly adopted brand manifesto, “Driven to Discover.” As a community, Lewis and Clark Community College has also revealed its new outlook: 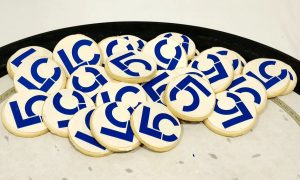 “We seek adventure. With courage and confidence, we dare to envision a place beyond what’s known. We stand for success. Charting a course, dropping an oar, and overcoming the odds – without pause or inhibition. We follow our hearts and speak our minds. Navigating waters calm and choppy, kept afloat by a fierce and fearless community. We elevate our common ground, even as we celebrate our differences. Individually, we’re undaunted. Together, we’re unstoppable. To Discover is to embrace uncertainty…Aspiring to ascend. Endeavoring to experience. Motivated to move forward. We are Lewis and Clark Community College…Inspired to innovate. Determined to succeed. Driven to Discover.” 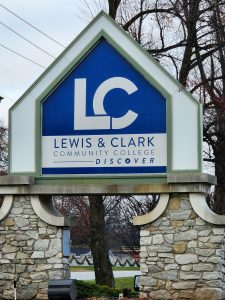 Over the next several months, the community will see the old logos around L&C’s campuses replaced with the new, a process that was also officially launched as a part of the Dec. 12 event with the unveiling of the college’s newly rebranded and redesigned digital signage across from the campus’s Harriet Haskell Memorial Entrance at Godfrey Road and Tolle Lane.

Following Lewis and Clark’s 50th anniversary in 2020, the college began an extensive brand and website refresh project with the two-year higher education experts at Interact Communications to uncover an impactful brand that would speak to the college’s many constituents on a personal and emotional level.

The year-long patented research process included multiple rounds of internal and external focus groups and a random phone survey given to a sampling of 500 district residents. The process uncovered community perceptions of the college, which Interact’s design team, along with L&C’s Marketing & PR department, married with the college’s goals and aspirations to create a new brand manifesto and graphical treatment that both honors the college’s rich past and looks to a bright future.

“Our update pays homage to the college’s impressive history, while at the same time incorporating a modern twist and bringing the college’s look and feel into the 21st century,” Inlow said. “It’s been a long road, and we’re so excited to finally be able to share this with the larger community. We also want to thank everyone who has contributed and helped make this launch a success.” 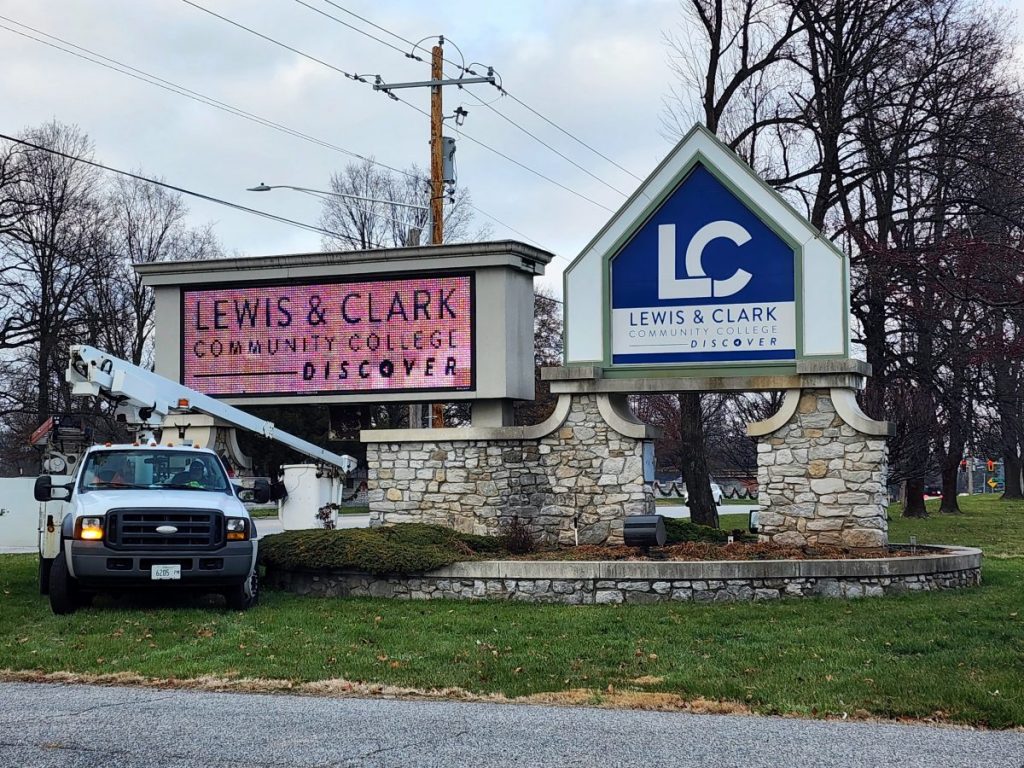 (EDITOR’S NOTE: This story also appears in the January 2023 print edition of the Illinois Business Journal.)