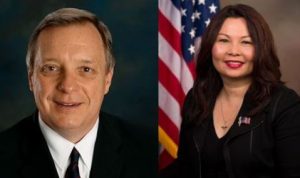 U.S. Senators Dick Durbin (D-IL) and Tammy Duckworth (D-IL) today issued the following statements after President Biden announced his intent to appoint 12 individuals to serve as members on the Route 66 Centennial Commission—a commission that was created through legislation championed by Senators Duckworth and Durbin to ensure this iconic American highway—which begins in Chicago and ends in Santa Monica, Calif.—is fittingly recognized for its impact on our community and culture over the past 100 years:

“Route 66 is one of the most famous roads in America and has played a tremendous role in our history and culture—connecting our country through travel, commerce and so much more,” said Duckworth. “I applaud President Biden’s appointment of 12 members to the Route 66 Centennial Commission—including two Illinoisans, Director of the Illinois State Museum Cinnamon Catlin-Legutko and Chairman of the Route 66 Road Ahead Partnership William ‘Bill’ Thomas—providing the Commission with the quorum it needs to move forward and help prepare for the upcoming 100th anniversary of Route 66 in 2026.”

“Route 66 has been keeping this country—from Illinois to California—connected for nearly 100 years,” said Durbin. “President Biden has appointed 12 qualified members to the Route 66 Centennial Commission—including two Illinoisans—which now gives it the quorum it needs to conduct business. I look forward to celebrating the countless family road trips, interstate commerce, and transportation feats that Route 66 has made possible over its nearly 100 years.”

Cinnamon Catlin-Legutko has served as a museum leader for nearly 25 years and is currently the Director of the Illinois State Museum, where she has been since 2019. William “Bill” Thomas is from Atlanta, Ill., and is currently the Chairman of the Route 66 Road Ahead Partnership, a non-profit founded in 2016.