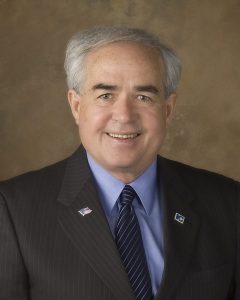 It is with deep regret that the college announces the passing of former Kaskaskia College President Dr. James C. Underwood, who passed away at his home in Beaver Lake, Ark., on Jan. 4, 2023.

To honor Dr. Underwood and his legacy, all Kaskaskia College flags will fly at half-mast this week.

Dr. Underwood served as President of Kaskaskia College for 14 years and retired in 2015 with his wife of 50+ years, Roxie Underwood. At the time of his retirement, Dr. Underwood served in a leadership capacity in the community college system for over 45 years.

He also served with distinction in the United States Army, achieving the rank of Lt. Colonel, having served in Vietnam through Operation Desert Storm.

Under his leadership, Dr. Underwood was instrumental in building the image of Kaskaskia College through a philosophy of “taking education to the people” through the establishment of education centers throughout the district, located in Vandalia, Salem, Greenville, Trenton, and Nashville.

Underwood was also influential in the enrollment growth of KC during his tenure and was instrumental in securing state appropriations to construct the Health and Professional Careers building to replace the antiquated, thirty-year-old wooden buildings on the main campus.

In addition, he was instrumental in providing leadership for the transformation of the Harry L. Crisp Technology Center located in Centralia and overseeing the construction of the Nursing Education Center and renovation of the former Illinois Animal Disease Lab into the college’s new Agriculture Education Center.

Dr. Underwood led many capital projects during his tenure at KC including capital campaigns that raised close to $3 million for various building projects.

Dr. Underwood’s most influential impact can be observed through the positive impact and name recognition he brought to Kaskaskia College throughout his tenure. As a proud community college graduate himself, Dr. Underwood and Roxie lived and breathed Kaskaskia College during his presidency, and were a constant presence at any College event, such as ball games, performances, and pinning ceremonies. He was essential in putting the college’s name on the map.

Current KC President George Evans said, “I’m deeply saddened by the news of the passing of Dr. Underwood, as he was an instrumental figure in my life and a mentor to many of us here at KC. I am very thankful to have served under his leadership and for the lessons I learned from him. His name will always be synonymous with the KC brand, and the impact he had here is still felt today and I anticipate will be felt by generations of students to come. Our thoughts, prayers, and deepest sympathies are extended to his entire family, specifically his wife Roxie and his children Randa and Jessie, and to all his grandchildren.”

Board Chairman Bill Hawley added, “My wife Diana and I are saddened by the passing of Dr. Underwood. Dr. Underwood was a dynamic and impactful leader who was instrumental in growing Kaskaskia College into the institution that it is today. Through his leadership, the college constructed the necessary facilities, housed with the latest technology, to ensure our students were prepared for their careers. As a community college graduate himself, Dr. Underwood was proud of the role these institutions played in providing the training and education for our leaders of tomorrow. On behalf of the Board of Trustees, I want to thank him for his service to higher education and extend our condolences to his family. I was proud to work with him. He will be sorely missed.”

As it begins its spring semester, Kaskaskia College will continue to honor the memory of Dr. Jim Underwood by providing students with the education they need to become the leaders and dreamers of tomorrow.