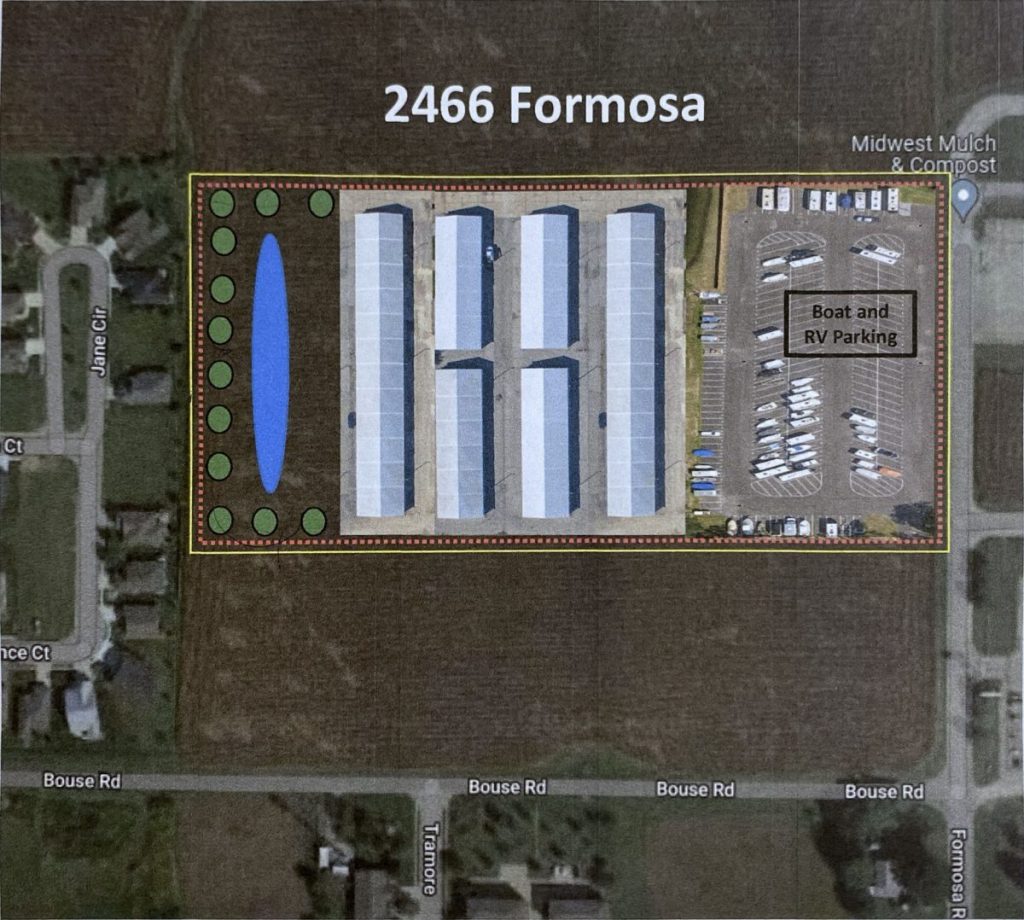 Over staunch opposition by an adjacent 55-plus living community, the Troy Planning Commission on Thursday [Dec. 8, 2022] voted to recommend a zoning change from residential to commercial for a property where a storage business is planned.

During the meeting, commission members voted 4-1 to recommend approval of the change for the 11-acre property 2466 Formosa Road. The recommendation will now go to the city council, which will make the final decision at the upcoming Dec. 19 meeting.

The change was requested by James Malecek, of St. Louis, who seeks to purchase and develop the property to offer storage units, as well as boat and recreational vehicle storage, according to preliminary design documents.

Malecek was the first to speak during the public comment portion of the meeting, saying the business would have a natural, green-space-type barrier between the business and the adjoining neighborhood, a retention pond to alleviate flooding and fencing, and lighting in place for security.

The entrance will be located on Formosa Road, whereas the entrance to the Seasons Village subdivision is located on Bouse Road. Thus, traffic would not be an issue to the residents, Malecek noted. He said was there to listen to the neighbor’s concerns and adjust plans if possible.

Other supporters of the proposed development followed, some saying that of possible businesses or facilities which might occupy the land, a storage facility was a less disruptive option.

Mark Mancewicz, President of the Cedars Village Homeowners Association, voiced concerns held by the residents, saying for many in the 55-plus living community this would likely be their last home purchase. A drastic change from the farmland next door to which they had become accustomed to a commercial enterprise was a big jump and not something they welcomed.

Historically, the land was zoned agricultural and was not incorporated into Troy city limits until October. Following the voluntary annexation, which was requested by the owner, the Clarence and Ellinor Adelhart Trust, the land was zoned residential. Board members during the meeting said that is always the default position in such cases until a change is requested.

Mancewicz, who noted all 46 property owners in the community were in opposition, also touched on potential decreases in property values, the aesthetics of the neighborhood, security concerns with out-of-area users accessing the storage facility, and 24-7 lighting to illuminate the facility. Drainage was also a major concern for community residents, as many said periodic flooding has long been a concern in the area.

Concerns were also raised over the preliminary layout of the facility, which residents in opposition to the change pointed out was different from what was presented at the meeting.

The 11-acre parcel in question is part of a larger 20-acre property, which is bordered to the east by Formosa Road, to the south by Bouse Road and to the west by Seasons Village. Original preliminary layouts showed the business occupying a north-to-south running parcel on the eastern side of the property, thereby creating a nine-acre buffer between the subdivision and the business.

A preliminary layout presented Thursday showed the property divided along an east and west line, butting the storage facility property line against the neighborhood. Community residents thus questioned what would be the fate, zoning-wise, of that nine-acre parcel as well. It was not made clear during the meeting why Malecek initiated the change.

Cynthia Westfall, who is trustee for the property through the trust, and other members of the Westfall family also spoke at the meeting. They noted when their father developed the land he was required to meet commercial standards for improvements. Across from the property, on the eastern side of Formosa Road and west of Interstate 55, properties are zoned industrial and host a concrete plant, a commercial truck facility and other commercial enterprises.

Also raised at the meeting was the city’s growth management plan, which in 2018 showed that the property in question had been earmarked for heavy industrial use. Given the current makeup of the area, commission members questioned whether the residential community should have been zoned as such in 2008 upon its implementation.

In the end, the commission sided with Malecek and supporters and approved a recommendation to the city council the property be rezoned to commercial, with a caveat that the business adhere to a 100-foot setback requirement instead of the 30-foot requirement mandated for buildings in commercial zones by current city ordinance.

A breakdown of the 4-1 vote shows commission member Larry Talbert casting the lone “no” vote, with members Liz Compton, John Nehrt, Matt Reiter and Jami Stone approving the change. While the city council will have final say, homeowners in the adjacent community expressed their disappointment following the meeting.

“It was slightly obvious they (the commission) had already done quite a bit of talking behind the scenes,” Mancewicz said. “Obviously, developers are constantly working with our community leaders on these things. It was disappointing.”

“The most important thing for these folks was having peace and quiet and a safe, secure neighborhood. Now you are going to introduce members of the general public coming in and out of a storage facility.”

(IBJ EDITOR’S NOTE: This story was prepared by and first published in the Troy Times-Tribune.)