By CYNTHIA BUENGER
For the Illinois Business Journal 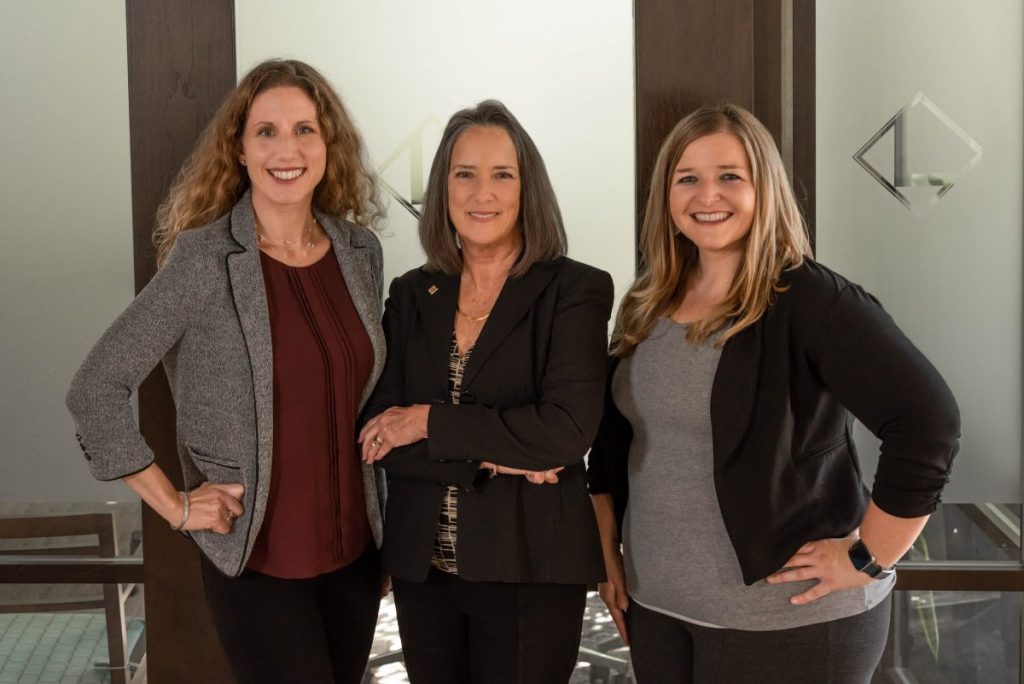 Louer Facility Planning’s Founder, Jane Louer (center) is retiring at the close of 2022. Long-time employees Yvette Paris (left) and April Grapperhaus (right) will take over the leadership reins at the start of 2023.

Joy, contentment, gratitude, satisfaction…words synonymous with a rewarding career that is coming to a close. Collinsville-based Louer Facility Planning, Inc. is completing the next phase of a multi-year succession plan put in place by founder and CEO, Jane Louer, by announcing her retirement at year’s end and passing the baton to long-time employees, Yvette Paris and April Grapperhaus.

Louer received her Interior Design degree from the University of Illinois and later earned an MBA from Southern Illinois University Edwardsville. She began her professional journey in Kansas City and later moved back to the St Louis area to ultimately settle in as the first female Vice President with Korte Construction. She launched the firm’s interior design and furniture group and progressed on to construction project development and marketing.

“With the experience I gained from the talented and knowledgeable team at Korte, I built enough self-confidence to venture out on my own and start Louer Facility Planning,” said Louer.

In 1996, she took a two-week vacation to find office space in downtown Edwardsville and began the process of building a framework for her new design business. Through her local and industry contacts, Louer was able to stay busy and snagged a furniture dealership for Michigan-based Haworth, Inc. With continued success, they outgrew the Edwardsville space and relocated to their current Collinsville location which provided them with more space and a design showroom.

Louer says there were many memorable projects over the years. One of which was designing and specifying furniture for a new building at NASA in Huntsville, Ala. “The design team was given tours of the existing buildings and labs which was very interesting.” She says working with Walgreens was another notable endeavor that was challenging from a design perspective as well as navigating the needs of their large corporate structure. “All of the projects were special and I learned something from every one of them.”

Being a woman in business, Louer has had to overcome some challenges. “When I began my career, women working full-time in professional positions was a rarity. We were not fully accepted as being able to contribute to the workplace as an equal. I felt the need to work harder and smarter to earn respect and there was always a lot of pressure.” reflects Louer. “Only with the passing of time has the workplace been more accepting of women and minorities which has made it more respectful and inclusive.”

Yvette Paris, NCIDQ, LEED AP, the firm’s longtime design director, earned her Interior Design degree from San Diego State University and joined the company in 2006. She is currently vice president and design director but will be preparing to take the helm as president and part owner in December. At the end of 2020, she purchased 10 percent of the company and, last year, purchased another 20 percent. She will be the majority shareholder at the end of this year and a 90 percent owner with the final phase set for 2024.

While reflecting on the 17 years spent alongside Louer, Paris says, “Jane broke the glass ceiling. Her legacy is one of determination, drive, and tenacity to stand out and be successful in an industry dominated by male leaders. Jane has been an incredible mentor to me over the years, providing support and resources to grow as an Interior Designer and as an executive leader.”

April Grapperhaus earned her associate degree in Business Management from Southwestern Illinois College and began her career at Louer in 2014 as a project assistant. In 2020, she became director of operations and part owner.

“Jane is a pioneer for women. She started the company from scratch and built it into what it is today,” said Grapperhaus. “Working for Jane has created opportunities I never thought possible.”

Louer says she is most proud of building her company and, most importantly, her two sons, Nathan and Craig Jr., and their families. She and her husband Craig plan to travel, visit family, golf, and enjoy some downhill skiing. “I have worked full-time for the past 47 years, so this is an entirely new adventure.”

Louer’s retirement has been crafted with the same care and attention to detail that her designs have showcased over her distinguished 47-year career. Paris and Grapperhaus are set to usher in the next generation of leadership and will take the reins in January.

(EDITOR’S NOTE: This story also appears in the December 2022 print edition of the Illinois Business Journal.)