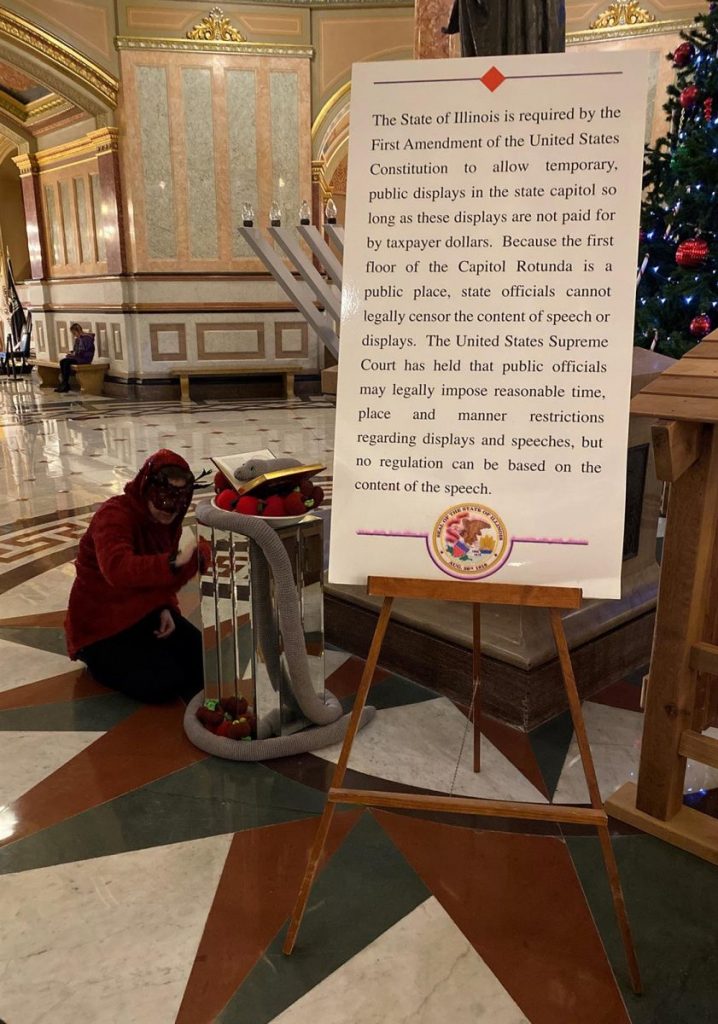 A member of the Satanic Temple of Illinois polishes the group’s 2022 holiday display on the Illinois Capitol rotunda. The display consists of a crocheted snake sitting on a book and a pile of apples crocheted by Temple members. (Capitol News Illinois photo by Jerry Nowicki)

The Satanic Temple of Illinois debuted a new display in the Illinois Capitol rotunda Tuesday, Dec. 6, 2022, taking its place next to the annual Christmas and Hanukkah displays.

For Christmas, that means the Springfield Nativity Committee has once again placed a manger scene featuring Mary, Joseph and Jesus. It was dedicated in a Nov. 30 ceremony that included an appearance by state Sen. Darren Bailey, the unsuccessful Republican candidate for governor in last month’s election.

For the Hanukkah display, the Lubavitch Chabad of Illinois placed a menorah, with one light bulb to be lit for each day of Hanukah. Their organization plans to have a ceremony with public officials in Chicago just before the holiday this year. 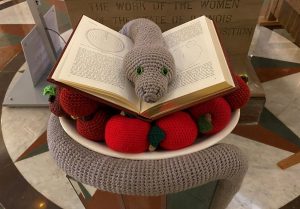 The Satanic Temple of Illinois’ 2022 holiday display is pictured on the Illinois Capitol rotunda. It consists of a crocheted snake sitting on a book and a pile of apples crocheted by Temple members. (Capitol News Illinois photo by Jerry Nowicki)

On Tuesday “Minister Adam” of the Satanic Temple of Illinois, who declined to share his last name for security purposes, was joined by about 15 Temple members to dedicate this year’s display. It consists of a crocheted snake sitting on a book and a pile of apples crocheted by Temple members.

“Every year, we do a holiday display and a show of unity and religious pluralism within the state Capitol rotunda,” Adam said. “And this year, we wanted to focus on the book bans that people have been trying to do all over the country.”

The book on which the serpent is perched is Polish mathematician Nicolaus Copernicus’ “On the Revolutions of the Heavenly Spheres,” a 1543 work that posited the then-revolutionary idea that the Earth revolves around the sun.

Adam said the Satanic Temple has seven tenets, the first being compassion and empathy “toward all creatures in accordance with reason” and the second being that the struggle for justice “is an ongoing and necessary pursuit that should prevail over laws and institutions.”

Other tenets focus on bodily autonomy, respect for the freedoms of others, belief in science, human fallibility and redemption, and “nobility in action and thought.”

Previous Satanic Temple displays included statues of a hand, wrapped in a serpent, holding an apple, and a likeness of a human-like baby goat.

Rabbi Meir Moscowitz, regional director of the statewide Lubavitch Chabad organization, said the menorah has been on display at the Capitol for about 18 years, and the organization maintains other displays throughout the state. 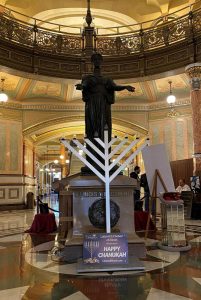 A menorah display is pictured on the Illinois Capitol rotunda. It has been placed there annually near Christmastime for the past 18 years. (Capitol News Illinois photo by Jerry Nowicki)

It’s a special year, Moscowitz said, because every seventh year on the Jewish calendar represents a Hakhel year, a year of gatherings, reminiscent of the historic seventh-year gathering at the Temple of Jerusalem.

On the Capitol display, one bulb will be lit each day of Hanukkah, which begins Sunday evening Dec. 18 through Dec. 26.

“So we are grateful that we have this opportunity in this wonderful country to go public with the menorah,” he said, noting that local Chabad centers can provide a menorah to anyone who needs one.

The Nativity scene, meanwhile, has been on display for at least 14 years during Christmastime. Tom Brejcha, president and chief counsel of the St. Thomas More Society and member of the Springfield Nativity Committee, said the faux-marble statues were purchased from Italy from a supplier to the Vatican. The manger is handmade.

He said the precedent for religious displays in public spaces in Illinois stems from a 1989 court decision regarding a Nativity scene at Daley Plaza in Chicago. That precedent was honored when it came to the state Capitol, he said, when advocates framed it under a free speech lens.

While the Capitol Satanic display has received pushback from some religious groups in the past, Brejka said “free speech applies to everybody.” 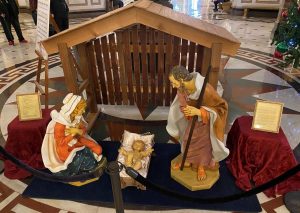 A Nativity scene is pictured on the Illinois Capitol rotunda. It has been placed there annually near Christmastime for the past 14 years. (Capitol News Illinois photo by Jerry Nowicki)

“And I think, frankly, it only underscores the beauty of the message of the Christmas Nativity display, which is a message of hope and care and renewal,” he said in a phone call.

All displays are flanked by a sign stating the state may not legally censor the public space.

But Henry Haupt, a spokesperson for Illinois Secretary of State Jesse White, said groups wishing to place displays on the rotunda must fill out a special event form and submit it to the Secretary of State Physical Services Department.

Displays must meet certain public safety requirements established by the secretary of state, according to Haupt.

“Temporary displays of this nature, erected in a public space in the Capitol rotunda, are protected by the First Amendment,” Haupt said in an email. “The U.S. Constitution protects freedom of speech, which remains a hallmark and cherished principle of this country.”

As for the Capitol Christmas tree, the secretary of state’s office said it is owned by the state, but it predates Secretary White, and there is no record as to who purchased or donated it.