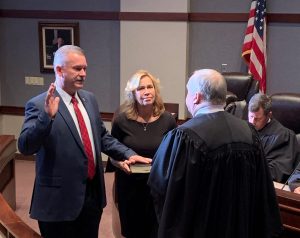 Connor became the 47th sheriff of Madison County as former Third Judicial Circuit Judge James Hackett administered his oath of office as his wife, Elizabeth, stood beside him. Retired Sheriff John Lakin presented him with his new badge.

“I’m humbled to serve you,” Connor said. “The county has come a long way in the last 220 years since the first sheriff was elected in 1812. I expect the sheriff’s office here today to continue being one of the finest law enforcement agencies in this region.”

Connor asked all law enforcement officers in the room to stand, and as they received applause from the crowd he said, “That’s who you should support — the men and women in this room.”

Conner said his childhood dream wasn’t to go into law enforcement, but rather to follow in his father’s and grandfather’s footsteps and become a steelworker.

“What I didn’t know is every step led me to here today,” he said.

He thanked his parents for his upbringing and the mentors in his 36-year law enforcement career along with everyone who helped him get to where he is now.

“Let’s focus on doing the best we can and if I had a slogan it would be ‘Do the right thing for the right reasons,” Connor said. “That’s what I hope to accomplish over the next several years.” 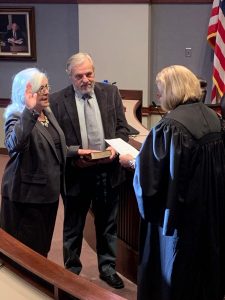 Andreas thanked all those who attended the swearing-in ceremonies as well as congratulated Conner and Slusser.

“It is a great honor to be a part of this institution,” she said. “I want to pay respect and a tribute to my predecessor and predecessors for their contributions through the years.”

Andreas said she will “faithfully and impartially” serve the residents of Madison County.

“I will be steadfast, loyal and fair and I undertake the functions of this office,” she said.

She said she is thankful and grateful for the support she has received.

“It will be an extraordinary privilege to serve as county clerk and recorder,” Andreas said. “With goodwill and good humor, I hope to meet, talk to and share experiences with many citizens completely conscious of the confidence and trust that’s been placed in me.” 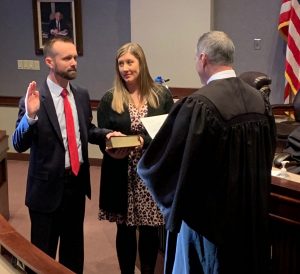 Madison County Treasurer Chris Slusser stood by his wife Megan as Associate Judge Andrew Carruthers swore him into his position for the third time. In December 2016. Slusser was appointed before winning his first election in 2018 and his second in November.

Slusser thanked his wife for “standing” beside him even though she’s not a fan of politics. He thanked his parents and said because family is important he’s created that atmosphere in his office, thanking his staff for creating one of the best treasurer’s offices in the state.

Slusser said he does his best to empower them to do their job with excellence and asked they be recognized.

“They are a hard-working dedicated bunch,” he said. “I truly enjoy working with them every day.”

He said everyone takes great pride in their work and they serve the taxpayers of Madison County every single day..

“Thank you for making me look good every day,” Slusser said. “I enjoy this work because I am passionate about doing right by the people and serving them with excellence.”

Newly elected Madison County Board members will be sworn in at 5 p.m., Dec. 5 at the reorganizational meeting