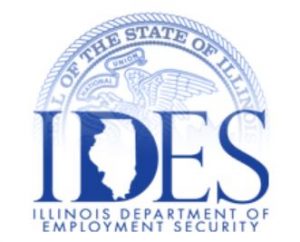 Jobs increased over the year in all fourteen Illinois metropolitan areas in October according to preliminary data released on Nov. 23, 2022, by the U.S. Bureau of Labor Statistics (BLS) and the Illinois Department of Employment Security (IDES). The unemployment rate decreased in twelve metropolitan areas, increased in one, and was unchanged in one.

“Job growth in every corner of the state has remained consistently strong for more than a year and a half,” said Deputy Governor Andy Manar. “Employers and jobseekers alike are encouraged to take advantage of the employment services IDES has to offer to participate in the expanding labor market.”

The metro areas which had the largest over-the-year percentage increases in total nonfarm jobs were the Rockford MSA (+5.5 percent, +7,700), the Davenport-Moline-Rock Island IA-IL MSA (+5.1 percent, +9,300), and the Chicago Metro Division (+3.9 percent, +142,800). Industries that saw job growth in a majority of metro areas included: Manufacturing and Leisure and Hospitality (fourteen areas each); Mining and Construction and Other Services (thirteen areas each); Education and Health Services (twelve areas); Wholesale Trade (eleven areas); Transportation, Warehousing and Utilities (ten areas); Professional and Business Services and Government (eight areas each). 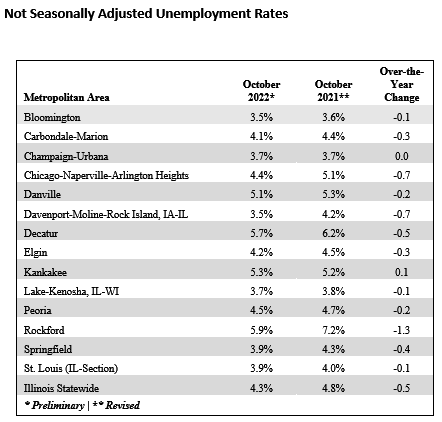 October payrolls declined in Trade, Transportation, and Utilities (-75), and Professional and Business Services (-50) Natural Resources and Mining (-25), and Manufacturing (-25).

Payrolls in Professional and Business Services and Manufacturing were unchanged. Employment declined in Construction (-100), and Trade, Transportation, and Utilities (-50), and Leisure and Hospitality (-25).

No changes were reported in Construction, Information, Trade, Transportation, and Utilities, or Professional and Business Services. Payrolls decreased in Manufacturing (-50) and Education and Health Services (-25).

Note: Monthly 2021 unemployment rates and total nonfarm jobs for Illinois metro areas were revised in February and March 2022, as required by the U.S. BLS. Comments and tables distributed for prior metro area news releases should be discarded as any records or historical analysis previously cited may no longer be valid. The official monthly unemployment rate series for metro areas, counties and most cities begins in 1990. The official monthly nonfarm jobs series for metro areas begins in 1990 and for non-metropolitan counties, it begins in 1999.

Disclaimer: The data contained in the metro area employment numbers press releases are not seasonally adjusted, and therefore are subject to seasonal fluctuations due to factors such as changes in weather, harvests, major holidays, and school schedules. Current monthly metro data should be compared to the same month from prior years (January 2022 data compared to January 2021 data) as data for these months have similar seasonal patterns. Comparisons should not be made to data for the immediate previous month or other previous non-matching months, as any changes in the data within these time periods may be the result of seasonal fluctuations and not economic factors.