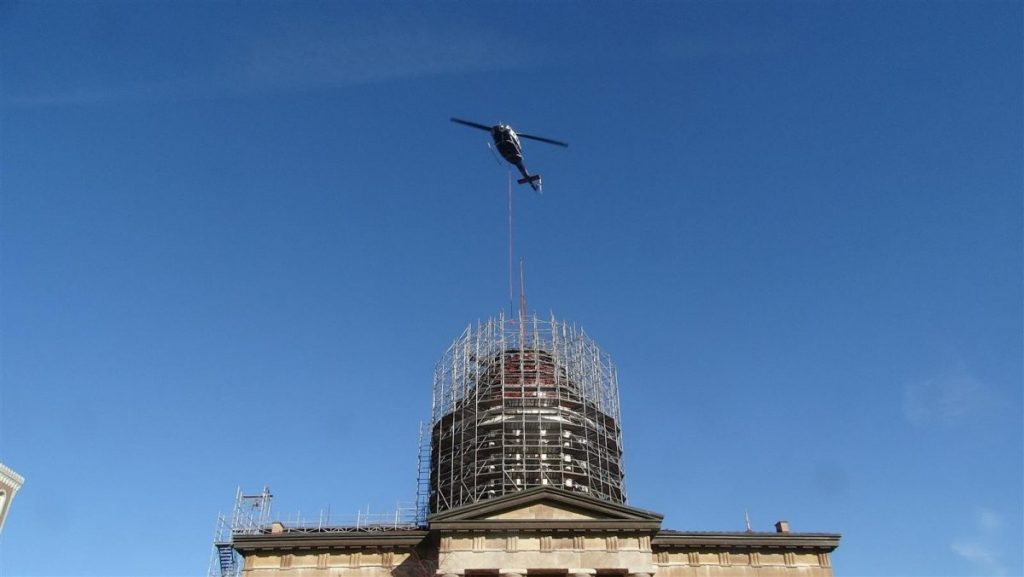 A helicopter is used to remove the flagpole from atop the Old State Capitol in Springfield on Monday morning as part of a renovation project to reinforce the dome and repair a leaky roof. (Capitol News Illinois photo by Peter Hancock)

People walking through downtown Springfield on Monday morning, Nov. 21, 2022, looked up to an unusual sight – a helicopter hovering over the Old State Capitol, dropping a rope and lifting away the flagpole that sat atop the bronze-colored dome.

“We took off the flagpole of at the Old State Capitol today in preparation for a new automated one that will be going up probably in a few months,” said Troy Gilmore, assistant site superintendent for the Springfield State Historic Sites with the Illinois Department of Natural Resources.

The operation took fewer than 15 minutes and was part of an ongoing renovation project that has kept the historic building shrouded behind scaffolding for about two years. The project involves repairing roof leaks, repairing and replacing windows, and replacing portions of the columns known as “capitals” – the decorative portions at the top of Corinthian columns.

Gilmore said replacing the manually controlled flagpole with an automated one will improve safety for workers who raise and lower the flag to half-staff or full staff when occasions call for it.

The Old State Capitol, located a few blocks northeast of the current Statehouse, was used by lawmakers from 1840 to 1876. It was the Capitol when Abraham Lincoln served in the Illinois House and it is where he delivered his famous “House Divided” speech in 1858 after accepting the Republican Party nomination for the U.S. Senate.

Gilmore said that when the legislature left the building in 1876, it was purchased by Sangamon County, which operated it for the next 90 years, during which time it made several substantial changes.

“The most drastic change that the county made was in 1900, when they raised the building up 11 feet taller than it even stands today,” he said. “And that was to add another level of offices on the ground floor. So, after 1902 you walked straight into the building off of the street level, you didn’t even walk up the steps as you would have today.”

The state of Illinois purchased the building in 1966 and launched a three-year restoration project to return the building to its original state, a project that involved taking the building apart and rebuilding it piece-by-piece.

Gilmore said the current renovation project will soon move into its second phase, which will involve removing asbestos from the boiler rooms and installing new restrooms for the first time since the 1960s.

He did not offer an estimate of when the entire project will be complete.