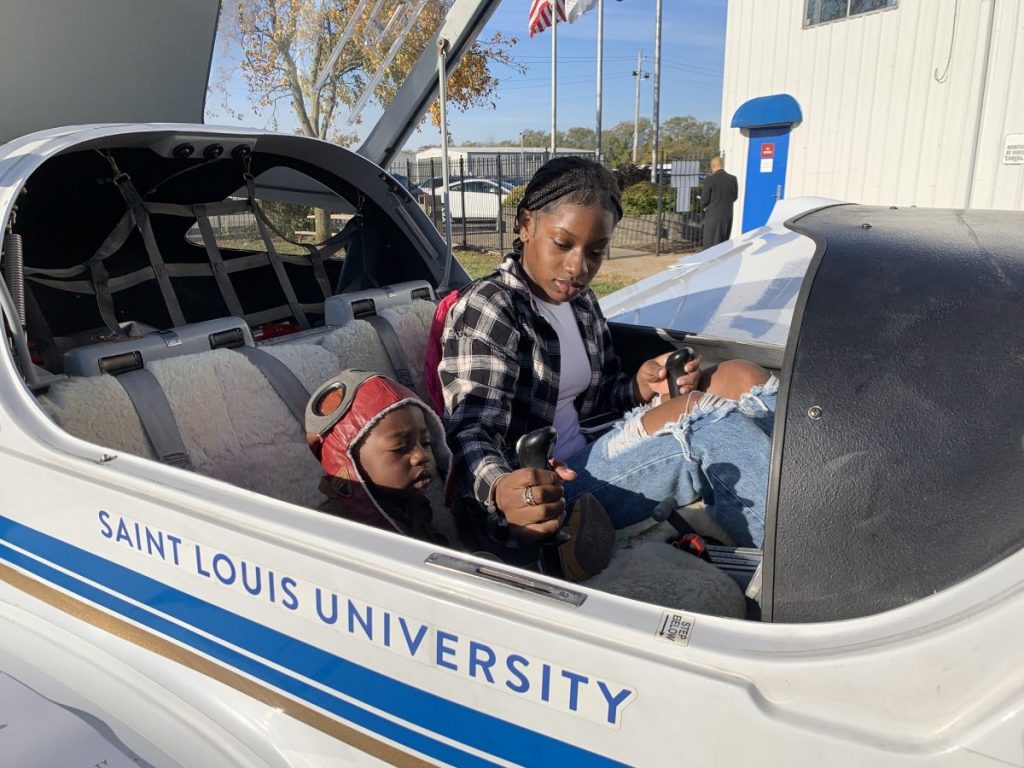 Lailah, a 14-year-old freshman student at Cardinal Ritter High School, and her 18-month-old brother Major, visited Girls in Aviation Day with their mother, who wanted to expose Lailah to the career opportunities the aviation sector holds for young women. The siblings were able to enjoy time in the cockpit of one of the planes used by SLU’s flight instructors.

More than 100 young women from a dozen bi-state area high schools and Girl Scout Troop 2184 learned about a variety of future careers in aviation during the Girls in Aviation Day event held at St. Louis Downtown Airport on October 28. The participants climbed into the cockpits of various aircraft for a unique vantage point and an overview of the instrumentation, and they flew planes in high-tech simulators that enabled them to safely experience the thrill of flight. Saint Louis University’s Oliver L. Parks Department of Aviation Science hosted the event at the airport, which is located near downtown St. Louis and has been home to the nation’s oldest flight school for decades.

“This event is a great opportunity to introduce the aviation industry to young ladies,” said Stephen Magoc, MBA, Chair of Saint Louis University’s Oliver L. Parks Department of Aviation Science (SLU). “Most know it’s a male-dominated industry, and we think it’s important to open these young ladies’ eyes to the opportunities that are out there for them. We’ve got students who come in as freshmen and tell us they went to a Girls in Aviation event and that’s where they learned about the opportunities.”

Addalyn Ruesing, 15, a sophomore at Mehlville High School, was excited to visit the flight simulation room and to try something she’d never done before.  “It was pretty fun. I thought it was really realistic; like what you’d really see in a plane,” said Addalyln, who came to the event without any expectations as to what she might discover. “I’m learning all about the job opportunities and careers in aviation and hearing there or lots of opportunities for women. I’d definitely look into it now.”

Alicia Thomas brought her two children to the event – her daughter Lailah Kelly, a 14-year-old freshman student at Cardinal Ritter High School, and her 18-month-old son Major Thomas. While both enjoyed time in the cockpit of one of the planes used by SLU’s flight instructors, Thomas said she made the trip primarily to expose her daughter to the career opportunities the aviation sector holds for young women.

Amy Pries, outreach coordinator for SLU’s School of Science and Engineering, said that is exactly the goal of events like Girls in Aviation. She said it aimed at introducing more young women to the fields of aviation and aerospace, where there is currently tremendous demand for pilots, engineers and various other positions.

“We hope to introduce young women of all backgrounds to new aspects of aviation,” said Pries. “If they want to be a pilot, we want to support that. If they want to do something else in the industry, we want to support that as well. The airline industry and aviation industry at large is not very diverse and it has an opportunity to continue to grow and become more equitable, and there is a place for everyone.” 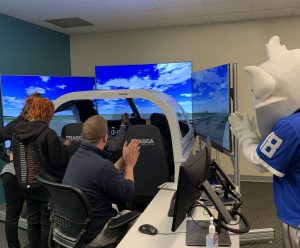 St. Louis University’s Billiken was on hand to cheer on students who had a successful flight in the flight simulator at St. Louis Downtown Airport during Girls in Aviation Day.

To help bring those opportunities to life for the students, the event featured a keynote address by Kat Charnal, a flight attendant and pilot in training for Delta Airlines.

“I love to push aviation because of the fact that being a pilot, a flight attendant, an aircraft maintenance technician; they’re all skills that most companies are looking for and they don’t have a lot of trained people to hire. There’s so much value to acquiring those skills,” Charnal said. Her key message for participants was to never give up.

“Anything you want to do, anything you set your eyes on, go for it. Don’t let the finances to stop you. Don’t allow the nay-sayers to tell you that you can’t do it. Don’t allow anything inside of you – you can sometimes be your own worst critic – stop you from pursuing your passions,” Charnal said. “I’ve had that happen to me where I questioned if I was even smart enough to be a pilot, but why was I questioning my own intelligence? I know that I’m intelligent and I know I can do whatever I put my mind to. Don’t let anything stop you from accomplishing your goals and achieving your dreams.”

A panel discussion with current aviation students at SLU gave the students a chance to hear from other young women who were in the early stages of embarking on a variety of aviation industry careers. Ellie Volansky, an Aviation Management Major and Flight Science Minor, shared her words of encouragement.

“If you know in your heart it’s what you want to do and you’re passionate about it, you have to tune out the noise. At the end of the day, it’s going to pay off. Just keep pushing and surround yourself with the people and voices who do support you,” said Volansky.

St. Louis Downtown Airport Director Sandra Shore was pleased to see such a great turnout for the event.

“I could not be more excited about it, especially being a female in aviation myself,” Shore said. “The variety of jobs available is a too well-kept secret. Not everybody is a pilot; we have firefighters, airport operations, aircraft mechanics, TSA. In Illinois, alone, it’s a $96 billion industry and that means plenty of jobs and plenty of open jobs. We don’t have the pipeline of individuals interested in aviation careers to fill future demand, so getting young students interested is just the seed that we plant that hopefully will change that.” 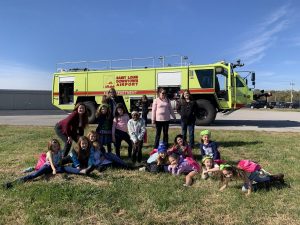 A group of scouts from Girl Scout Troop 2184 at St. Margaret of Scotland elementary school were among those attending Girls in Aviation Day at St. Louis Downtown Airport.

To learn more about Girls in Aviation Day or opportunities to participate in future events, contact Amy Preis at Saint Louis University’s Oliver L. Parks Department of Aviation Science via email at sseoutreach@slu.edu.

St. Louis Downtown Airport is owned and operated by Bi-State Development. It is located a few minutes east of downtown St. Louis in Illinois on 1,000 acres in Cahokia Heights and Sauget.