The Governor’s Office of Management and Budget (GOMB) released the annual Illinois Economic and Fiscal Policy Report showing under Governor Pritzker’s leadership Illinois is in its best fiscal shape in decades.

“Illinois’ bills are being paid on time, we have over $1 billion in our rainy-day fund, our credit ratings are up and we are honoring our commitments to long-term financial liabilities by contributing extra to Illinois’ pension systems,” said Governor JB Pritzker. “As we celebrate the tremendous progress we’ve made with our partners in the General Assembly, we remain committed to working tirelessly for Illinois taxpayers and responsibly managing the state’s finances. We’ve closed a seemingly insurmountable structural deficit that I inherited, and together we are securing Illinois’ long-term fiscal stability and providing economic opportunities to its citizens.” 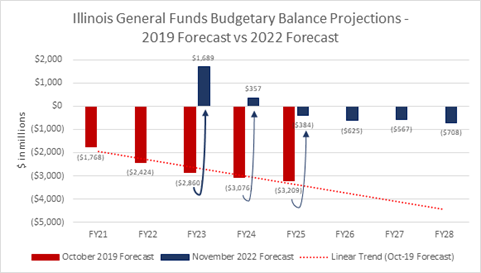 The future years’ budget outlook detailed in the report benefits from strong fiscal management over recent years as the Governor worked with partners in the General Assembly, the Comptroller and the Treasurer, to balance state budgets, tackle the state’s multi-billion-dollar bill backlog, repay COVID related short-term borrowings early, make $500 million in extra-ordinary payments to the state’s pension systems and put more than $1 billion in a savings account for fiscal emergencies or economic downturns. Additionally, by rebuilding the foundation of the state’s finances during the Pritzker administration, the Governor and lawmakers were able to provide $1.8 billion in tax relief this year to the hardworking people of Illinois.

Even with troubling national economic indicators, income and sales tax collections so far this fiscal year continue to exceed budget forecasts by significant margins. Coupled with other one-time revenues, the General Funds revenue forecast for fiscal year 2023 is revised upward by $3.69 billion. GOMB is continuing to monitor the revenues closely as inflation and national/international factors beyond the state’s control may impact the economy in uncertain ways. GOMB is now projecting a nearly $1.7 billion net surplus in the general funds budget for fiscal year 2023, wiping out a forecasted fiscal year 2023 shortfall of nearly $3 billion as estimated in 2019.

The Governor intends to pursue several actions to continue Illinois’ strong path forward, and put the state in the best possible fiscal position to prepare for the economic uncertainty that lies ahead. The Governor’s recommended actions include working with the Legislature to:

Illinois’ significant improvement to its fiscal outlook has been noticed by the state’s credit rating agencies, which have upgraded Illinois’ General Obligation Bond credit ratings a total of six times during the past year.

The reports are available to the public online and can be found here: https://budget.illinois.gov/policy-reports.html.