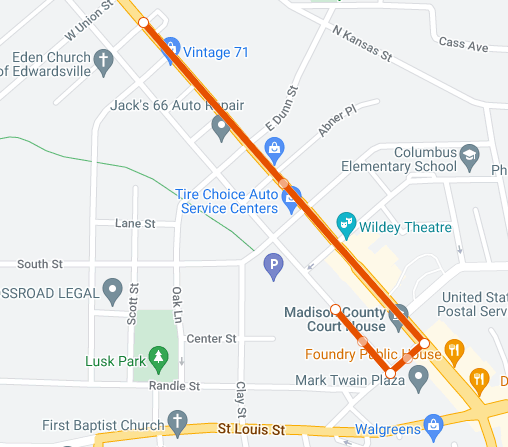 The Edwardsville American Legion Post #199 is once again hosting its annual Veterans Day Parade through the streets of downtown Edwardsville to honor all those who served in the military.

The Veterans Day Parade will begin at 7 p.m. on Friday, Nov. 11, the official federal holiday.

The long-standing event will follow a slightly different route than it has in previous years, which also will change the areas where spectators can view the parade.

Parade participants will set up in the parking lot in front of Eden Church of Edwardsville, near the intersection of North Main Street and West Fourth Street. That is also the starting point for the parade.

The parade route then continues south on North Main Street, turning onto St. Louis Street just past the Madison County Courthouse. The parade will make another quick turn onto North Second Street, where the parade will end and the participants will disperse.

The parade route will be closed to vehicular traffic during the event. No parking will be allowed in the 200 and 300 blocks of North Main Street and in the 100 block of St. Louis Street.

For those who cannot attend the parade, it will be live-streamed on the City’s Facebook page and available for viewing later on the City’s YouTube channel.

A larger lineup is planned for this year’s event, including veterans and their families, the American Legion color guard, four marching bands, numerous student groups, baton twirlers, a World War II reenactment group and a sizable assembly of military vehicles.

Andrea Wetzel, a member of the Metro East Community Rotary Club, which is partnering with the American Legion on the event, said the goal is to grow the event and encourage as many spectators as possible to attend.

“This is something that’s important to do to go honor those veterans,” Wetzel said.

Following the parade, the public is invited to stop by the American Legion Post on Illinois Route 157 for refreshments and to spend time with area veterans, Wetzel said.