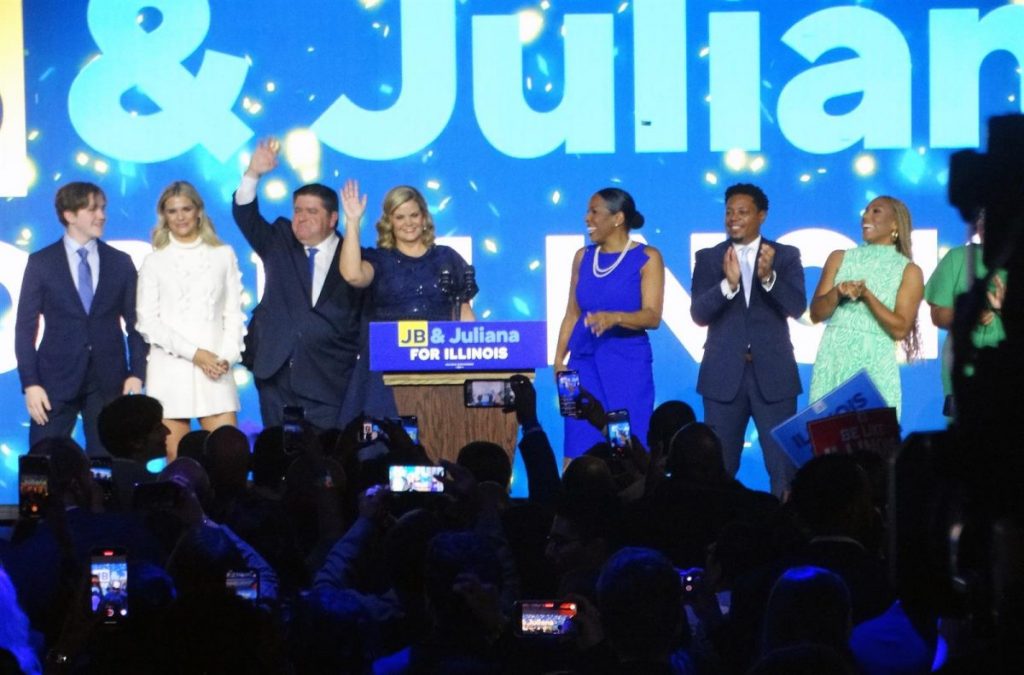 Gov. JB Pritzker and Lt. Gov. Juliana Stratton stand with their families on the stage of the Marriott Marquis hotel in Chicago on Tuesday night after the Associated Press called the Illinois governor’s race for the incumbent. (Capitol News Illinois photo by Peter Hancock)

By the time speakers came out to pray, say the Pledge of Allegiance and play the national anthem at Republican challenger Darren Bailey’s election night watch party in Springfield on Tuesday, the Associated Press had called the Illinois governor’s race for incumbent Democrat JB Pritzker.

While results are not official until certified by the Illinois State Board of Elections on Dec. 5, the Associated Press called the race for Pritzker instantly upon closure of the polls at 7 p.m. As of about 10 p.m., unofficial results showed Pritzker with a lead of about 54-42 percent with 65 percent of precincts reporting, according to the Chicago Tribune’s tally of election results.

About 8 p.m., Pritzker addressed the crowd at the Marriott Marquis in Chicago.

“Just a few minutes ago, the news networks called the race in our favor,” Pritzker told a cheering crowd at a Near South Side hotel ballroom. “I’m grateful tonight that Illinois continues a long tradition of peaceful and fair elections. And I am so thrilled to spend four more years serving as your governor.”

Bailey took the stage just before 10 p.m., giving a heartfelt speech to supporters.

“I may not be going to Springfield as your next governor, but I will never stop fighting for you,” the state senator said, to cheers.

He also noted he called Pritzker to congratulate the incumbent on his victory, evoking a murmur from some in the crowd. But he also had a message for the governor.

Earlier, his team and the crowd of a few hundred people at the Crowne Plaza hotel in Springfield seemed stunned by the immediate call.

Rep. Blaine Wilhour, R-Beecher City, a Bailey ally and frequent campaign surrogate, took the stage about 7 p.m., calling the campaign a movement that goes beyond any party or politician. Rep. Adam Niemerg, a Teutopolis Republican and another Bailey ally in the General Assembly, said he expected a late night.

But Pritzker had taken the stage to declare victory within an hour with a fiery speech to supporters.

“And finally, here in the Land of Lincoln, the home state of Barack Obama, the first state to ratify the 13th and 19th amendments ending slavery and guaranteeing a woman’s right to vote, we will never surrender in the battle against hate,” he said.

The race for governor had become a referendum on Pritzker’s sweeping first-term agenda.

Bailey, a downstate farmer and lawmaker from Xenia, had attacked the billionaire from Chicago over his handling of the COVID-19 pandemic and high crime rates in Chicago and elsewhere, often accusing him of being out of touch with ordinary Illinoisans.

But Pritzker, who self-funded his campaign, touted accomplishments during his first term such as balancing the state budget, earning multiple credit upgrades and passing a $45 billion capital infrastructure bill while casting Bailey as a conservative extremist.

As of about 10 p.m. Tuesday night, it appeared Democrats would maintain control of every statewide office and supermajorities in the General Assembly.

Republican comptroller candidate Shannon Teresi and attorney general candidate Thomas DeVore had not conceded as of 10 p.m., although they trailed about 60-38 percent and 57-40 percent, respectively.