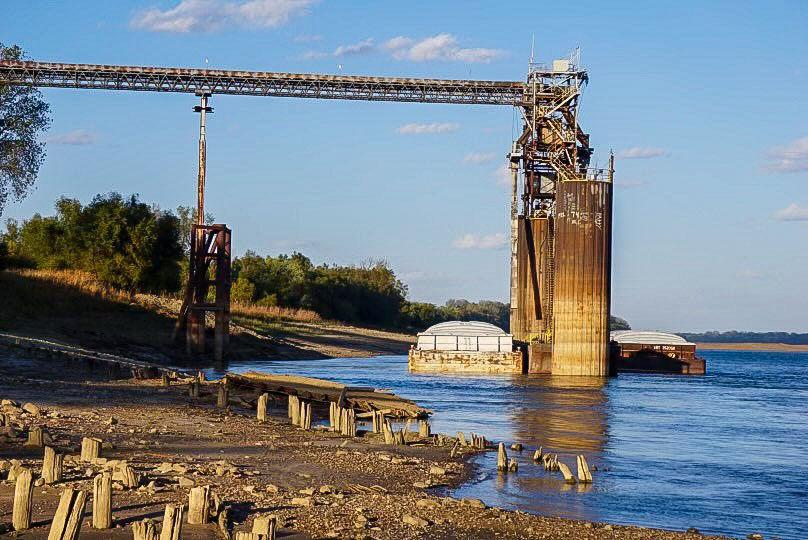 A pair of moored barges float where the Mississippi and Ohio rivers converge near Cairo. Water levels on both inland waterways have fallen enough to expose riverbeds and disrupt the movement of grain-carrying vessels. (Photo by Alexis Burnett)

Illinois farmers typically hope for timely rains before harvest, when crops need the precipitation to build out high yields.

But in the latest chapter of a season that’s been far from normal, the call for rain is now aimed at growing the Lower Mississippi River south of St. Louis, where water levels have become low enough to disrupt the movement of grain-hauling barges.

A crucial link in the Corn Belt supply chain, barges are being loaded lighter to avoid groundings. And shipping companies, in response to a narrower river channel, are limiting the number of barges that can be towed together.

Those changes, combined with an increasing demand for vessels as harvest ramps up, means it will continue to take longer and cost more to move less grain down the river to export terminals, according to Mike Steenhoek, executive director of the Soy Transportation Coalition.

“The fact remains that the efficiency of this inland waterway is clearly going down and that’s going to have an impact,” Steenhoek said. “The lower water levels will put more upward pressure on barge freight rates.”

USDA in its Sept. 29 Grain Transportation Report said as much, reporting that year-to-date downbound grain volumes on the river are 10% lower than last year, while barge freight rates are up 58 percent from a year ago to a record-high $49.88 per ton.

Despite some late-summer, extreme weather events, most regions of Illinois and the states that fall within the Mississippi River and Ohio River valleys have endured abnormally dry conditions throughout the year.

According to the Sept. 27 U.S. Drought Monitor, the central part of the state is abnormally dry while a half-dozen counties in the southern region are experiencing moderate drought.

Chris Smith, director of operations for Corn Belt Ports, said the low-water situation is nearly exclusive to river routes south of Lock and Dam 26, where the Mississippi River free flows.

“The Upper Mississippi River and the Illinois Waterway is in good shape,” Smith said. “We are being informed that the 9-foot channel will remain open for the foreseeable future even with the low flows.”

However, in Cairo, where the Mississippi and Ohio rivers converge, water levels were hovering about one foot above the Ohio River’s official low stage of 9.4 feet. They were forecast to keep falling below that level as above-average temperatures and little-to-no rainfall patterns continue through the month.

National Weather Service data further showed multiple points along the Mississippi River south of Cairo were at or below their low water threshold.

The U.S. Army Corps of Engineers St. Louis District in a statement released Sept. 30 said it has been monitoring the levels and will deploy dredges to deepen portions of the Mississippi and Illinois rivers.

“We are currently at -0.7 feet on the St. Louis gauge and are preparing the channel for -7.0 feet, although as we experienced in 2012 the fate and transport of sediment gets dicey when below -5.0,” said Joan Stemler, chief of water control operations. “The Missouri River cutoff, which usually impacts us in late November or early December is the next point we are watching.”

What limited shipping means for agriculture

In the meantime, barge companies have both reduced how many bushels they load onto a single barge and the number of barges they string together to move downstream.

A typical barge can be loaded with about 50,000 bushels of soybeans, but operators are cutting that total by 5,000 to 6,700 bushels per barge to avoid grounding, Steenhoek said.

And barge tows, usually arranged at 30 to 40 barges, are now down to a 25 barge-maximum to account for the narrower river channel, he added.

“It’s like attaching a garden hose to a fire hydrant,” Steenhoek said of trying to use fewer barges to meet the demand that will certainly grow as harvest continues.

That dynamic will likely translate to weaker basis levels for newly harvested crops, as the levels historically parallel barge rates, according to Scott Irwin, Laurence J. Norton chair of agricultural marketing at the University of Illinois.

“And a wide basis is a signal to store more (grain),” Irwin told FarmWeek. “The market is saying, ‘We literally can’t take it right now so please store more.'”

While storing recently harvested grain rather than selling it could be “a reasonable thing to do,” Irwin also said, “there’s no guarantee that it’s going to rain more and that you’ll get the river back up to more normal levels.”

A spokeswoman for Cargill, which operates multiple grain terminals along the Mississippi River, declined to comment on whether the company will alter its prices in response to the shipping rate increases.

“We are working closely with the industry, associations and government agencies to minimize the impacts and keep grain moving safely across the heartland to the river and export terminals,” Cargill spokeswoman Bridget Christenson said in a statement to FarmWeek.

On top of getting paid less for their crops, farmers could also see additional costs associated with moving upstream inputs like fertilizer.

Tearney added that GROWMARK’s fertilizer barge rates won’t be impacted because the company has secured yearly contracts with its barge lines. However, at least one barge line GROWMARK contracts with said it would temporarily pause its operations below Baton Rouge, Louisiana, because of the low water levels.

Spot barge rates, too, are increasing due to the heightened demand to use fertilizer barges as grain-hauling barges.

And until a significant enough rain recharges the river, farmers should expect those rates to keep rising, Steenhoek said.

“Part of the reason the Illinois corn and soybean crop is so successful is that access to the inland waterway system,” Steenhoek said. “Unfortunately, when that system is not operating full throttle, the consequences can be felt by many Illinois soy and corn farmers.”