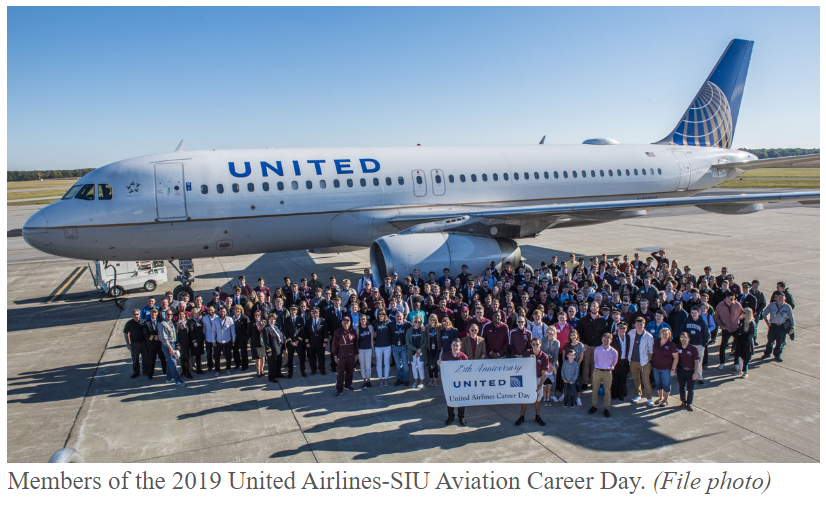 United Airlines Captain Julie Savage was “the average kid with a big dream” in 1994 when her dad drove the then-Cary-Grove High School student to Chicago O’Hare International Airport to embark on the inaugural United Airlines-SIU Aviation Career Day at Southern Illinois University Carbondale.

Savage knew she wanted to fly, but with no family connection to pilots — her father was an aviation mechanic — she was unsure how she would succeed. Her experience that day was “life changing.”

“Going down to SIU and seeing the amazing aviation flight and management program gave me a vision. Meeting United employees who were alumni gave me mentorship. Those two things together gave me my future,” said Savage, a 2000 aviation program graduate whose career path includes being named the top female pilot in the nation in 1999 as a member of the Flying Salukis. She went on to build her experience and landed her “dream job” with United in 2013.

First Officer Bias graduated in 2012 and went to work for other airlines before starting with United Airlines in August 2021. Bias, who also attended an aviation career day while in high school, was also an SIU student volunteer for the event and served as president of Aviation Ambassadors, the registered student organization that hosts the event. He doesn’t believe he would be where he is without the career day experiences.

Flying into Southern Illinois Airport will be a “full circle moment” for not only Bias, but also alumni crewmates, along with former instructors, professors, advisers, classmates and staff, he said.

“Without their support, I wouldn’t be in the career I am in, or flying over our amazing campus as a United Airlines pilot,” Bias said. “I hope this exposure to aviation shows students that SIU has everything they will need to be successful in this industry and all the positions within it. I hope that the students, who like myself, saw the career as just a dream, will see that a career in aviation is very obtainable. Sometimes you have to see it in order to be it, and this exposure to aviation will do just that.”

Savage noted that a surreal moment for her is that her son, a Cary-Grove High School student, will be aboard and also wants to fly, “if not more than his mom did at his age.” She and Bias worked together on flights over the summer, and she’s looking forward to working with him again.

“Our stories are similar, and I know that between the two of us, you won’t find a more grateful crew,” she said. “We are ready to rock this day and set the foundation for some dreams.”

Strong link with a new partnership

This is the 22nd career day involving United and SIU Aviation; the program was interrupted by the 9/11 terrorist attacks and the COVID-19 pandemic. The partnership, however, extends beyond the career day. In September, SIU and United signed an agreement that provides the most secure career path for aviation students interested in becoming professional pilots through United’s Aviate career development program. As an Aviate university partner, SIU aviation students and instructors who apply and are successful in the Aviate selection process will join the program, receive a conditional job offer from United, and enjoy the benefit from a defined career path.

Captain Christopher Sims, a 1994 SIU Aviation graduate who is a 27-year pilot with United and is the career day flight facilitator, said part of the presentation to high school students on Saturday will include the Aviate program. The airline’s volunteers come from various departments including maintenance technicians, pilots and flight attendants.

Sims, who has been involved in several aviation career days, views it as “my opportunity to pay it forward.” For some students, it will be their first opportunity to visit an airport, ride in a plane and visit a college. Sims noted that he was a United pilot alumni volunteer when Savage attended in 1994.

Kayla Hesano, a sophomore in aviation technologies from Poplar Grove, Ill., was aboard the 2019 flight to SIU. It was just as Hesano was becoming interested in aviation and wanted to know if it was a field she should pursue.

“I did not know much about aviation before doing that trip, but after, I learned a ton and fell in love with not only aviation but the school as well,” she said. “It made me excited to keep flying during high school, and I looked forward to attending SIU. After the flight, I knew 100% I was going to SIU and wanted to major in aviation. It showed me how amazing the school was with a personal tour directed toward what I was looking to major in. It helped me decide what college I wanted to go to.”

Hesano said her goal after graduating in spring 2024 is to initially work for a regional airline and build up her hours and eventually work for a major airline. She will also graduate with her Federal Aviation Administration airframe and powerplant certificates and hopes to build her own airplane.

Over its history, more than 2,700 high school students have participated in the event, said José Ruiz, professor and School of Aviation interim director. While designed as an outreach event to introduce students to the wide range of opportunities within the aviation industry, Ruiz notes the career day serves as a recruiting mechanism, particularly for women and other underrepresented groups. While annual numbers vary, Ruiz said, between five and 20 participants each year will return to SIU to pursue an aviation career.

The Boeing Pilot and Technician Outlook for 2022-2041 shows that while the global commercial aviation industry rebounds from the pandemic, projections are for 2.1 million new aviation personnel over the next 20 years. That includes 602,000 pilots, 610,000 maintenance technicians and 899,000 cabin crew members, with worldwide fleets expected to nearly double.

“Partnering with a highly respected member of the aviation community like United lends credibility to SIU Aviation and helps cultivate the next generation of aviation professionals,” Ruiz said. “Very few events of this type exist anywhere among our nation’s collegiate aviation institutions.”