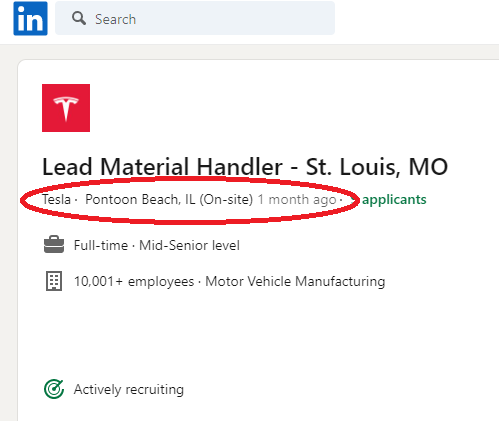 UPDATE: A spokesperson for the developer, NorthPoint Development of Kansas City, has replied to the IBJ’s inquiry and has said that they are “unable to comment on behalf of another company or a potential lease.”

From Construction Forum, as reported in the St. Louis Post-Dispatch, it looks as though electric car manufacturer Tesla has plans to open a warehouse facility in Pontoon Beach, south of I-270 in the Metro East’s planned Gateway TradePort industrial park.

According to a market report published by CBRE, a commercial real estate firm, Tesla has signed a lease on an approximate 667,000-square-foot warehouse space. At this time, it is still not clear what Tesla’s plans are for the warehouse space under construction at 1202 Tradeport Parkway, located off Interstate 270 and Illinois Route 111 in Madison County.

The warehouse deal comes as the company plans to open a dealership and service center in south St. Louis County. Tesla also operates a dealership in Chesterfield.

Efforts to reach the developer, NorthPoint Development of Kansas City, for further details have not yet been fruitful. And while Tesla’s website did not list any jobs available in Southwestern Illinois, listings for openings can be found on LinkedIn, as seen in the accompanying photo acquired by the Illinois Business Journal.

Updates will be shared when more information becomes available.