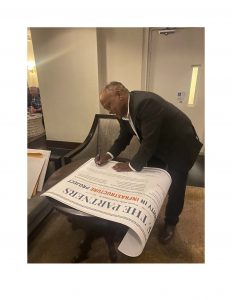 At an event hosted by the Equity in Infrastructure Project, the Illinois Department of Transportation and Illinois Transportation Secretary Omer Osman joined the transportation departments of California, the District of Columbia, Kansas, Louisiana and Michigan in signing a pledge to leverage infrastructure spending to build wealth in underserved communities through increased opportunities for historically underutilized businesses.

“By joining with our partners in signing this pledge, IDOT further strengthens its commitment to incorporating the principles of diversity, equity and inclusion in everything we do,” Osman said. “Under Gov. JB Pritzker, Illinois is making unprecedented investments in infrastructure, which have been bolstered by historic funding commitments at the federal level. Before all of us is a once-in-a-lifetime opportunity to create a workforce and contracting community that is inclusive and truly reflects the communities we serve.”

The Equity in Infrastructure Project was founded by Denver International Airport CEO Phillip A. Washington, former U.S. Deputy Secretary of Transportation John D. Porcari and others in anticipation of the $1.2 trillion Infrastructure Investment and Jobs Act signed last year by President Biden.

By signing the pledge, the departments of transportation commit themselves to increasing the number, size and scope of contracts going to historically underutilized businesses by facilitating access and reducing barriers to compete for projects. Historically underutilized businesses include Disadvantaged Business Enterprise firms, Women-Owned Business Enterprises and Small Business Enterprises. Pledge signers are expected to boost the number of such firms growing to become prime contractors and participating in joint ventures or as equity participants by the end of 2025.

With the passage IIJA, Illinois is estimated to receive $17.8 billion in combined infrastructure funding over five years, almost $16 billion of which will be invested across all modes of transportation.

The new federal program will help further advance the goals and reach of Gov. Pritzker’s historic, bipartisan Rebuild Illinois, which is investing a combined total of $33.2 billion into the state’s aging transportation system, creating jobs and promoting economic growth. The landmark capital program is not only the largest in state history, but also the first one that touches all modes of transportation: roads and bridges, transit, waterways, freight and passenger rail, aviation as well as bicycle and pedestrian accommodations.