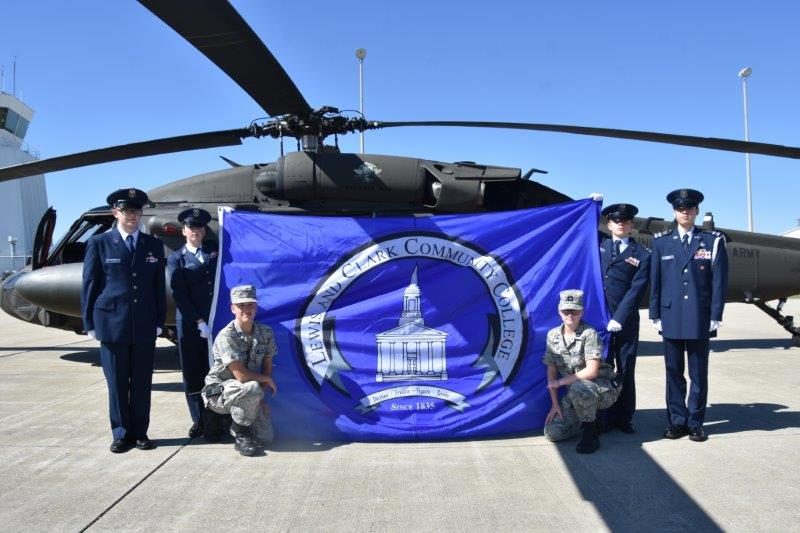 CAP, which is based at the airport in Bethalto, and the L&C Veterans Club joined forces earlier in the month to commemorate the anniversary of 9/11 during the National Multiple Sclerosis Society’s Bike MS: Gateway Getaway Ride, which was held on the college’s Godfrey Campus, Sept. 10-11.

“It was a pleasure and an honor for the L&C Veterans Club to join forces with the cadets from the IL-286th Composite Squadron at the Bike MS 9/11 ceremony,” said Terry Lane, Director of Career and Veterans Services and advisor of the L&C Veterans Club. “It was raining that morning, but the cadets showed up early and in uniform to complete their mission. They exhibited professionalism and discipline and are a credit to their squadron.”

The L&C Vets Club placed the flags from each of the branches of the U.S. Armed Forces on the event stage.

The Cadets, performing in the rain, presented the U.S. flag while the National Anthem played.

The Civil Air Patrol was formed in 1941 under the Office of Civil Defense and became a benevolent, nonprofit organization in 1946. CAP is an Auxiliary of the U.S. Air Force. The IL-286th Composite Squadron motto is “ABOVE ALL, HONOR.”

As a Total Force partner and Auxiliary of the U.S. Air Force, CAP’s 56,000 members, in nearly 1500 communities, selflessly devote their time, energy, and expertise toward the well-being of their communities, while also promoting aviation and related fields through aerospace/STEM education and helping shape future leaders through CAP’s cadet program.

The L&C Veterans Club is open to all Lewis and Clark Community College students who want to show their support for those who have served and for those who are serving in the U.S. Armed Forces.

The club meets monthly during the fall and spring semesters to discuss issues important to veterans, service members and their families. It plans events and fundraisers on campus throughout the year and interfaces with other veterans groups and agencies off campus.

The Veterans Club assists with getting answers to questions about L&C, benefits, community, state and federal services, etc. For more information on services to veterans and their families, Lane at tdlane@lc.edu or at (618) 468-5500.