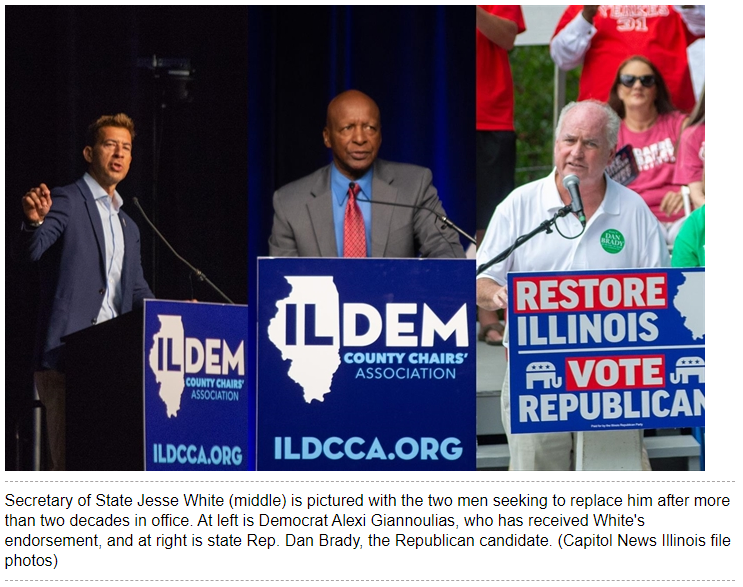 For the first time since 1998, the secretary of state seat in Illinois will be an open one in the general election.

Giannoulias is seeking to reenter the statewide political landscape for the first time since his 2010 loss in the race for U.S. Senate to Republican Mark Kirk by about 59,000 votes. Brady has served in the House since 2001 after spending two terms as McLean County coroner from 1992 until 2000, and he is a partner at a Bloomington funeral home.

They’re vying to replace outgoing Secretary of State Jesse White, who has held the position since 1999 and is known for consistently outperforming the rest of the Democratic statewide field throughout his time in office. Both men spoke highly of White, who endorsed fellow Democrat Giannoulias but has also spoken highly of Brady.

The two candidates each participated in recent interviews organized by the Illinois Associated Press Media Editors, with questions posed by representatives of the State Journal-Register and Capitol News Illinois.

Both have a long list of policies they’d like to implement if elected, with a heavy focus on modernizing the office and putting many of its functions online.

Giannoulias said he’d look to create a mobile app, and by driving many services online he’d cut down foot traffic at facilities “anywhere from 50 to 70 percent.” That would allow the office to retrain some driver services employees to serve as “office advocates” to help individuals through the system, especially seniors and individuals with disabilities.

“People are paying a time tax in Illinois. It takes too long for them to access government services,” Giannoulias said.

He’d also look to implement a “skip-the-line” program to allow driver services visitors to pre-register, arrive at a specified time and move to the front of the line. He’d also explore digital IDs and driver licenses, creating kiosks at driver facilities, and creating pop-up offices at libraries and community colleges. He’d also consider implementing online vision tests if it’s proven it can be done safely.

Brady has his own long list of initiatives, including moving things online, using libraries and community colleges as satellite sites, maximizing staff training and capabilities, and making the SOS website more user friendly.

One focus has been an electronic lien and title transfer program that’s been written into state law for years but has languished without proper implementation. It’s something Giannoulias wants to implement as well.

“We’re talking about streamlining things that can be done within hours … versus, as I said, the several weeks to months that’s taking right now,” Brady said, later adding, “What we’re missing here is someone who’s going to take the bull by the horns and get the project done.”

“I would change that by being secretary of state by… prioritizing those service facilities and looking to where we have other staff that can be out in the facilities interacting, responding, serving the general public,” he said.

The office itself has more than 4,000 employees and touches many aspects of state government beyond driver services, including management of the Capitol Complex in Springfield, maintaining a police force, policing securities fraud, registering lobbyists and serving as the state librarian.

Brady said some of the best ideas for improving operations are likely to come from those employees.

With similar focuses of modernizing the office and reducing wait times, each candidate touted their own experiences as the reason they’re best fit for the office.

“I’m running for this office not because I want to use it as a springboard to another political office. I’m running because I’ve always been and will continue to be a public servant,” Brady said.

Brady said he’s worked across the aisle on budgets and other issues and worked with Secretary White to address distracted driving and implement senior driver education programs. His private-sector funeral home experience and time as McLean County coroner also buoy his credentials, he said.

Giannoulias, meanwhile, says his time as state treasurer will greatly benefit him as he once again seeks statewide office. So will his time in business, he said.

“I will tell you having run a statewide office before, I think that’s experience that is important, that is relevant. It’s the management of a large office, and modernization will be at the forefront of everything we do in that office,” he said.

As accomplishments as treasurer, he cited implementation of a low-interest loan program for first-time home buyers and later defended his management of the Bright Start college savings program for which he received scrutiny in his 2010 Senate campaign. While one fund lost money, he said, he improved the fee structures for the college savings program and increased enrollment.

Since he left office, Giannoulias was appointed by Gov. Pat Quinn as chair of the Illinois Community College Board and he spent time on the Illinois Board of Higher Education, the Chicago Public Library Board and various nonprofit boards.

From 2012 until 2018 he was a “private wealth manager” at Bank of New York Mellon, a job that he said was essentially “to bring in new business.” He said his clients were “families and individuals.”

His LinkedIn account also lists him as CEO of Annoula Ventures, which he described as a private investment vehicle.

“I started a little fund where we invest in tech startups and other businesses,” he said, noting he invested in Cameo, an online company that allows celebrities to sell brief video messages.

Now, he said, he’s an investor, rather than an owner and maintains only passive investments, including shares of Cameo Inc. and 14 other entities in which he has an interest, including family trusts. His statement of economic interest also notes investments in cryptocurrency and a recent bitcoin sale.

“Even though these are just passive investments, I will – the first thing I’d do, even during the transition period, get a legal opinion, make sure the inspector general takes a look at whatever I have,” he said, noting he would divest anything that is determined to raise a red flag.

Brady’s statement of economic interest notes only his income as state representative and his partnership in the Kibler-Brady-Ruestman Memorial Home in Bloomington.

While the two candidates shared a modernization focus, they diverged on the issue of license fee reductions. Brady has proposed cutting license registration fees by $50 temporarily due to rising inflation, but he had not yet filed a bill to do so.

He was among the lawmakers who voted on bipartisan lines to raise license fees in 2019 to help fund a $45 billion capital infrastructure plan. Of the $50 increase, $49 was to go to the road fund to be spent on transportation infrastructure.

He suggested some administrative changes that could be enacted to mitigate the effect on the secretary of state’s office if fees are lowered, but he didn’t say how he’d make up for reductions in the road fund.

Giannoulias, meanwhile, called it “irresponsible budgeting,” to suspend fees regardless of a person’s income without identifying funding alternatives. But he said he would consider a program that would cut fees for lower-income individuals, provided there is a budget workaround.

Another point of difference was that Giannoulias is stumping for a law that would prohibit the use of Illinois’ automatic license plate reader cameras to track individuals coming to the state for abortion services. That’s not a practice expressly allowed in state law regulating the cameras, although Giannoulias said it’s also not expressly prohibited.

Brady said he didn’t think it’s a necessary move and he contended his opponent was spending too much time on social issues.

Giannoulias countered that voters deserve to know where a candidate stands on such issues.

Brady has acknowledged he’s voted for Donald Trump for president but said he was a John Kasich supporter in a previous primary. He said he supports the Republican ticket in Illinois in general and believes Joe Biden was rightly elected president. Otherwise, he says, voters talk to him about the issues of the office – not about GOP gubernatorial candidate Darren Bailey and Trump.

Further coverage of the forums can be found here.