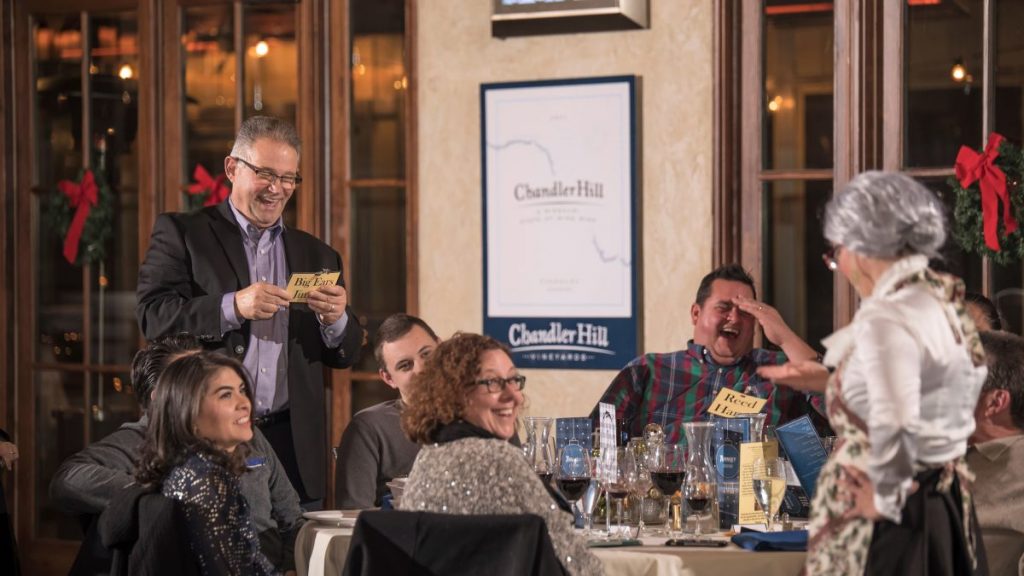 Eyes widen around the room as realization dawns on the crowd…there’s been a murder. Do you know who dun it? Was it the baker with the rolling pin? Was it the ex-fiancé with cyanide…or was it you?

Every year, this burning question is raised at hundreds of laughter-filled Jest Murder Mystery Company shows. With creativity and hard work, this local success story is now considered by many to be the funniest murder mystery company in the country.

But this is not a typical murder mystery dinner theater company. It’s not about true crime. It’s not about being the detective. It’s about building comradery, uniting people in a shared, very funny experience. Over years, Jest Murder Mystery Company has discovered that there is no greater pairing than laughter and food when it comes to bringing groups together.

When the show begins, the room will be filled with many groups and individuals who may have little more in common than proximity. But by the end of the event, they will have supported and encouraged each other, been creative together, laughed together and now have something in common they can talk about for years to come.

This new spin on murder mystery dinner theater was the brainchild of writer, director, actor, and entrepreneur, Randy Manning. Before starting Jest, Manning performed murder mysteries in St. Louis with other murder mystery dinner theater companies. He believed he could write a funnier show that focused a little less on mystery and a lot more on the audience’s experience. Inspired, he wrote his first show “A Fistful of Hollers” and put it to the test at his next family reunion.

“My formula worked. Everyone had such a great time playing their parts and working together to solve the crime,” said Manning.

After a few adjustments, Manning created a show that included a themed storyline with room for improvisation and customization from the audience.

Manning said, “I realized that as an actor, I could make the audience laugh and they would have fun but, if the audience members could be the stars of their own show, it really made for an unforgettable, laughing-so-hard-they’re-crying kind of experience.”

With this principle firmly in hand, Manning founded Jest Mysteries in 1999 (now Jest Murder Mystery Company) and has been bringing groups together with murder across the nation ever since. Jest now has troupes in Los Angeles, Chicago, Cedar Rapids, New York, Cape Cod, Miami, Kansas City, Minneapolis, Denver and more.

Manning retired in 2017 and left his daughter, Leslie Franklin, at the helm of the Jest empire. Jest’s standards for high-quality entertainment have not diminished.

“We audition rigorously to ensure we have the best actors available, and we train them to help the audience shine. The talent in this area and in our other troupes is incredible and it makes the shows that much better. We truly have an amazing team and I am blessed to be a part of it.” Franklin said.

Franklin now operates Jest out of an office on Belle Street in Alton. Materials for shows are created here and shipped all over the country. This is also where actors are trained, and shows are booked.

“I live in Jerseyville so my commute to Alton via the Great River Road is incredible. And Alton itself is one of the coolest towns I’ve ever been to and it’s so close to St. Louis. Operating here has been perfect for our business,” said Franklin.

Specializing in unique group entertainment (both in-person and virtually), their St. Louis public shows can be seen every Friday and Saturday night at the Lemp Mansion as well as other well-known St. Louis venues such as Eckerts, Maggianos, Pere Marquette Lodge, Villa Antonio Winery, and Das Bevo to name a few.