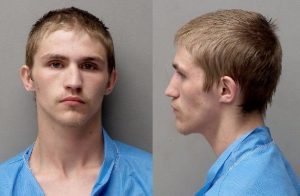 Madison County State’s Attorney Thomas A. Haine on Monday announced a murder conviction and 40-year prison sentence for a defendant who fatally shot a man during a robbery attempt.

Caleb D.E. Smith, 22, of Tilden, pleaded guilty to first-degree murder in connection with the shooting death of Devin Judd, 23, of Lenzburg, in April 2020. Smith and Judd were acquainted and had been together on the night of the shooting when Smith attempted to rob Judd. The victim stumbled into the lobby of a Collinsville hotel and was taken to a St. Louis hospital, where he was pronounced deceased.

Smith will have to serve 100 percent of the prison sentence.

“Thanks to the diligent work of police and assistant state’s attorneys, this defendant will spend most of his adult life behind bars,” Haine said. “Violent crime in Madison County will always be met with vigorous prosecution by my office.”

Haine also commended the quick work of the Major Case Squad of Greater St. Louis, Collinsville Police and Illinois State Police. Smith and a co-defendant, Dakota L. Winters, 27, of Granite City, were taken into custody within 12 hours of the shooting.

Winters previously pleaded guilty to armed robbery in connection with the case and received a 14-year prison sentence.

“We hope these prison terms send a message to would-be offenders and provide some justice to the family of the victim,” Haine said.