Landmarks Illinois has announced the recipients of the 2022 Landmarks Illinois Richard H. Driehaus Foundation Preservation Awards, an annual program now in its 29th year that celebrates exceptional preservation efforts in Illinois. The 2022 award-winning projects, located in Belleville, Chicago, Lockport, Marion, Petersburg and Rockford, will be honored at a public ceremony on Nov. 4, 2022, at the historic Chicago Cultural Center.

“Our 2022 award winners demonstrate the impact preservation has in our Illinois communities: it creates inspiring places where people want to live and visit, boosts jobs and economic activity and strengthens local pride,” said Bonnie McDonald, President & CEO of Landmarks Illinois. “We are proud to bring well-deserved attention to these preservation efforts and the people who thoughtfully and beautifully preserved our historic places.”

Thanks to the efforts of dedicated, local preservationists, the 91-year-old former Hotel Belleville has been rehabilitated into an affordable housing development called “Lofts on the Square.” Owners MH Belleville Associates LP undertook the $14.6 million transformation of the historic, Art Deco-style hotel, a 2014 Landmarks Illinois Most Endangered site. The project is an example of the power of sustained advocacy efforts as well as public-private collaboration.

The conversion of the Hotel Belleville into Lofts on the Square is the result of a long and successful effort by Belleville residents to find a new use for the city’s largest historic hotel. When Hotel Belleville opened in 1931, it was a major site for trade meetings and conventions and represented Belleville’s commercial and industrial success in the 20th century. After being converted into senior housing, the hotel went vacant in the 2000s. The City of Belleville entertained an offer by a local attorney to buy the building and demolish it, an option that appealed to many in Belleville who were afraid that such a large vacant building would be a downtown economic drain.

Local preservationists, however, saw potential in this historic hotel and rallied around the building, arguing for its preservation and reuse. In 2014, Landmarks Illinois bolstered local preservation efforts by naming the Hotel Belleville to its annual list of Most Endangered Historic Places in Illinois. The City of Belleville listened to pro-preservation voices and changed course, working with the current development partnership on a National Register of Historic Places designation in 2018 and a $14.6 million rehabilitation that began in 2019.

Belleville’s investment in preservation has paid off with the Lofts on the Square. The rehabilitation of the hotel into 47 affordable apartments using low-income housing tax credits and federal and state historic preservation tax credits has created unique opportunities to live in downtown Belleville for residents of low income, retirees and those with disabilities. 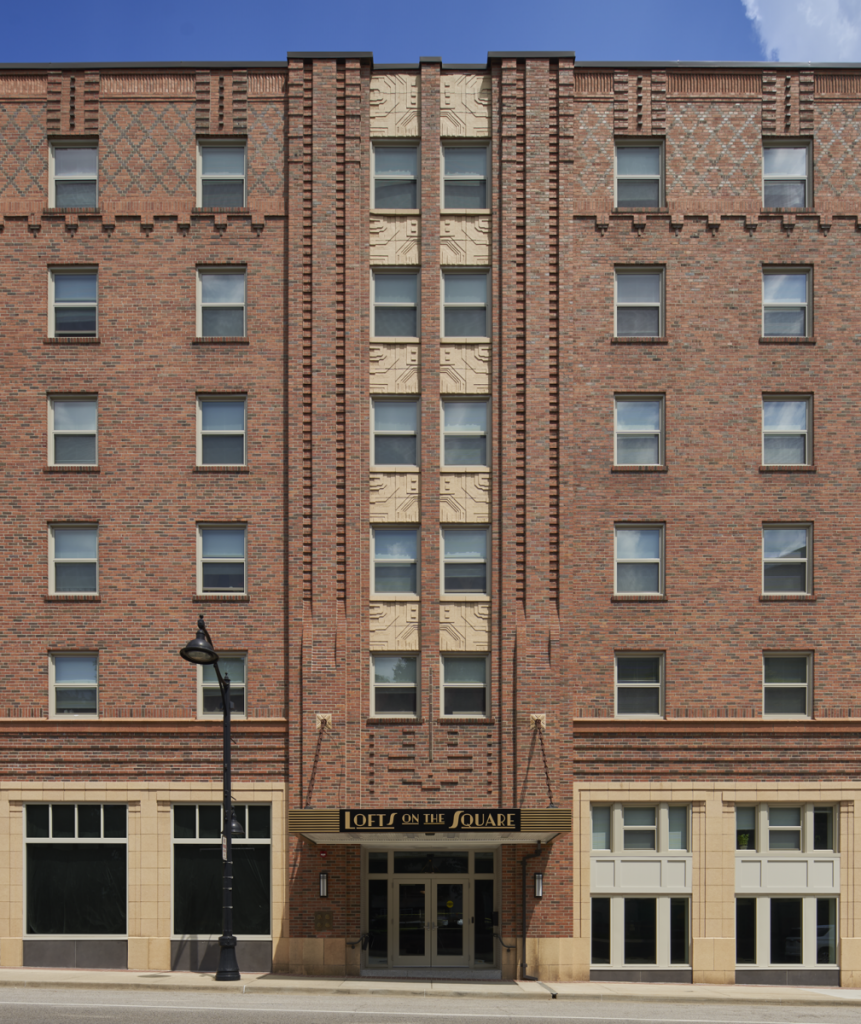 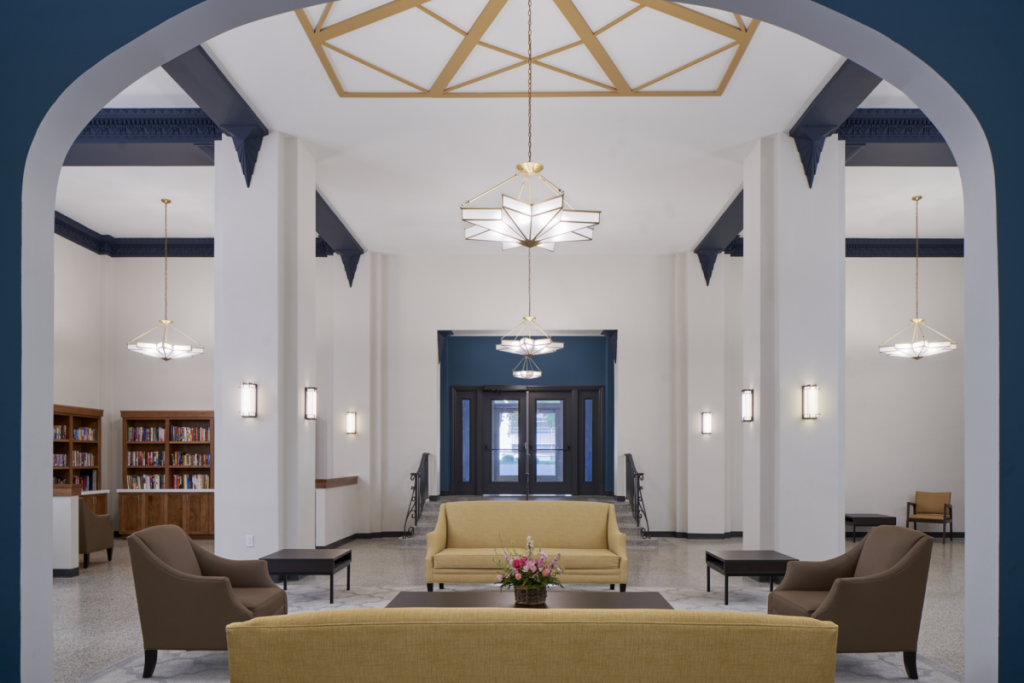 Landmarks Illinois Asks: WHY IS THIS PLACE IMPORTANT TO YOU?
Michael Allen, Preservation Research Office

The Hotel Belleville is the last pre-World War II building anchoring Belleville’s central fountain square and the intersection of Main and Illinois Avenues, traditionally the heart of the city. Its presence on the square can be seen for miles from the south and north, and it gives the city a strongly urban landmark as well as store of memory related to the city’s past as a commercial center for southern Illinois. The building also represents the largest Art Deco building built in Belleville, and its geometric terra cotta and brick provide a testament to the city’s 20th-century fortunes. 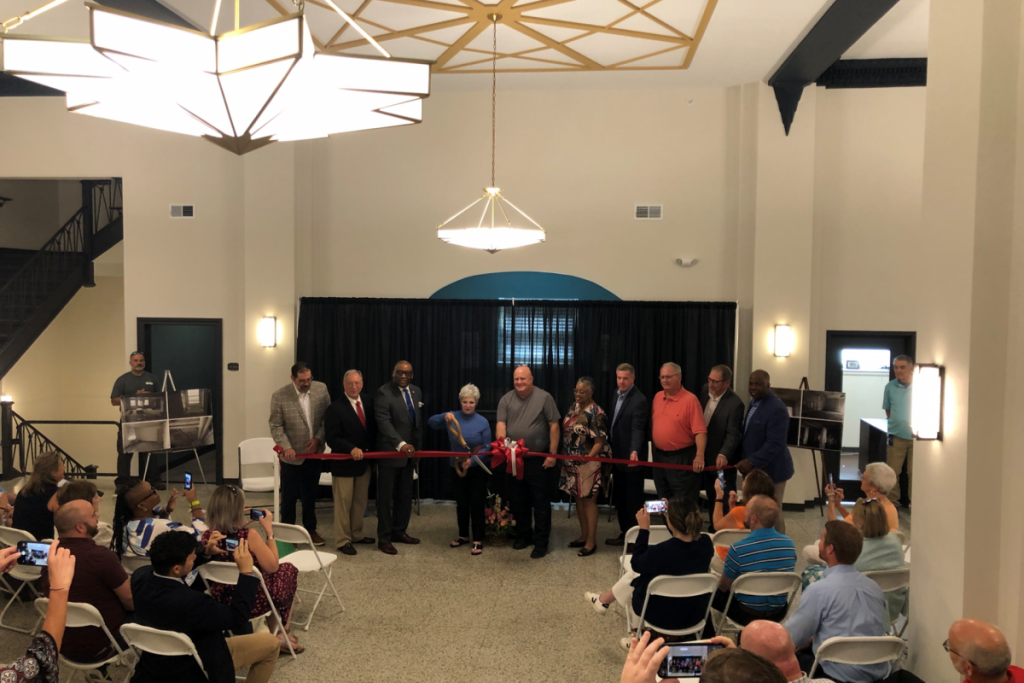 HOW DID SAVING THIS PLACE IMPACT PEOPLE IN YOUR COMMUNITY?
Michael Allen, Preservation Research Office

The project prevented Belleville from having a major gap in the blocks facing its signature central fountain square. The retention and enhancement of connective urban fabric on Main Street in Belleville bolsters efforts to make downtown walkable. The preservation of the city’s largest historic hotel allows for significant local heritage to be retained.

The project demonstrates how historic preservation can support the values of building a more inclusive model of downtown redevelopment, through the conversion of a historic building into affordable housing. A long community campaign to prevent demolition of the historic Hotel Belleville began in 2009, so the preservation success also underscores Landmarks Illinois’ efforts to support community efforts to tell their own stories.

This project is the result of a partnership between the public Southwestern Illinois Development Agency and the private developer Bywater Development. Without the public-private collaboration, it is unlikely that the project would have succeeded. Furthermore, Hotel Belleville received Illinois historic preservation tax credits in the very first round ever for the expanded statewide program, making for a pioneering project. 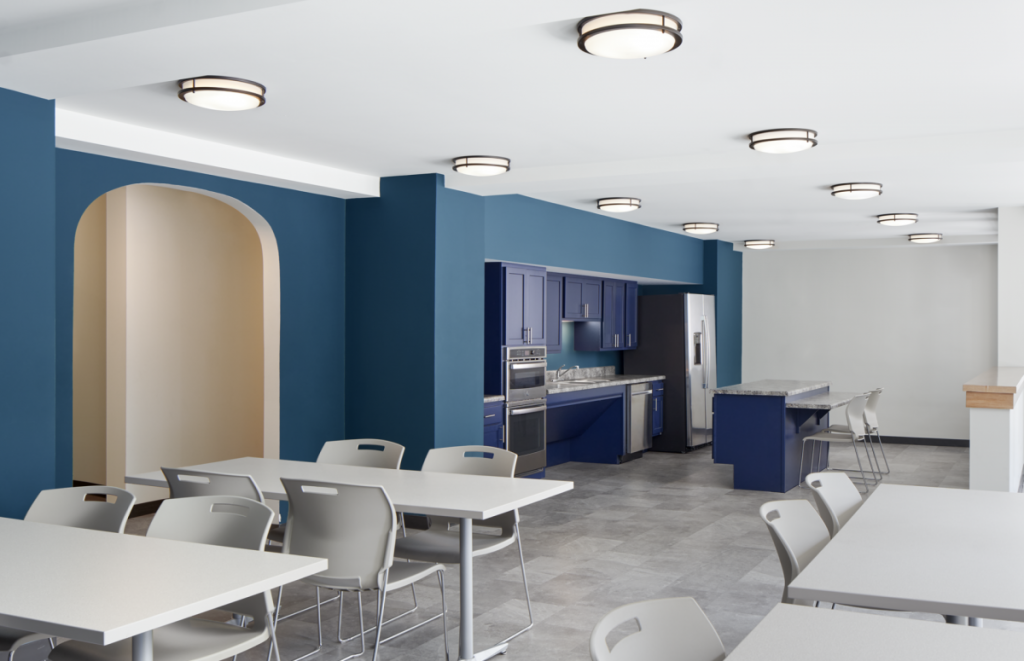 The 2022 Landmarks Illinois Richard H. Driehaus Foundation Preservation Awards Ceremony will take place at 6 p.m. on Friday, Nov. 4, 2022, at the Chicago Cultural Center’s second-floor Claudia Cassidy Theater in downtown Chicago. A cocktail reception will immediately follow in the Grand Army of the Republic (GAR) Rooms. The event is open to the public.

Tickets for the event are $50 for Landmarks Illinois members and $65 for non-members. A student rate of $35 is also available with proof of a student ID. Guests who wish to join remotely can view a live, virtual presentation of the ceremony for free with registration. Tickets can be purchased at our website or by contacting Alma Rebronja, Events Manager at events@landmarks.org.

ABOUT THE AWARDS PROGRAM

Since 1994, the annual Landmarks Illinois Richard H. Driehaus Foundation Preservation Awards has honored individuals, projects and programs in Illinois whose work demonstrates a commitment to excellence in preservation. A jury of preservation professionals from across Illinois selected the 2022 winners based on the project’s positive impact in the community, how it inspires others to save places as well as degree to which the project aligns with Landmarks Illinois’ mission, values and guiding principles.

The Grand Army of the Republic Rooms, completed in 1897 in Chicago’s Cultural Center (the city’s former main public library) have undergone a $15 million restoration to preserve and honor the original features designed by Louis Comfort Tiffany and Healy & Millet. The project, which spanned more than two years, was funded by a generous anonymous donor and led by the City of Chicago Department of Cultural Affairs and Special Events, Harboe Architects and Berglund Construction.

Lincoln Park Zoo’s historic lion house has been reborn as the Pepper Family Wildlife Center following a much-needed $41 million rehabilitation and expansion. This Chicago Landmark, constructed in 1912 and listed in the National Register of Historic Places, has been restored to its original Arts & Crafts-style appearance, features greatly improved zoo animal habitats, and provides an immersive and fully accessible space for the enjoyment for visitors.

Longtime Chicago housing activist Mattie Butler and her organization Woodlawn East Community and Neighbors (WECAN) collaborated with Preservation of Affordable Housing (POAH) to guarantee the long-term affordability of two 1920s Woodlawn apartment buildings. Initially saved in the 1990s by WECAN, POAH obtained the property in 2017 and in 2022 celebrated the completion of the $26.8 million renovation of the renamed Mattie Butler Apartments, honoring Ms. Butler’s decades of stewardship and activism for affordable housing in the Chicago South Side community.

Local residents and business owners Inga Carus and Peter Limberger renovated the vacant former Mackin Motor Company Building in Lockport’s downtown historic district to open Lock & Mule, a craft brewery, restaurant and event venue. The adaptive reuse of the 7,000-square-foot building — constructed in 1927 and listed in the National Register of Historic Places — received support from the City of Lockport and has contributed to the revitalization of the downtown area.

Crown Brew Coffee Co. opened in October 2020 in a 120-year-old building in downtown Marion that owners Joshua Benitone and Jared Gravatt rehabilitated largely on their own. As the first business to open in a city-led downtown revitalization effort, the coffee shop serves as an example of what is possible when local governments and business owners join efforts to drive economic development.

Built in 1872 as a “megastore” selling hardware, groceries and dry goods, the Broadgauge Building in Downtown Petersburg has been reopened and reimagined by owner Douglas Pope. Today, the multi-purpose building includes a bar, restaurant, billiards room, event space and coffee shop, drawing the community back into the historic space and becoming one of the town’s largest employers.

Visit the Landmarks Illinois website to learn more about each of the 2022 award winners.

We are People Saving Places for People. Landmarks Illinois is a membership-based nonprofit historic preservation organization serving the people of Illinois. We inspire and empower stakeholders to save places that matter to them by providing free guidance, practical and financial resources and access to strategic partnerships. For more information, visit www.Landmarks.org.