Americans’ interest in unions is on the rise. A recent Gallup poll revealed that U.S. approval of labor unions is the highest it’s been since 1964.

Opponents of unions say they impact worker incentivization. With the continued talk of ‘quiet quitting,’ or workers choosing to do just the bare minimum, ResumeBuilder.com surveyed 1,000 union workers to understand their level of engagement and attitude towards their employer. 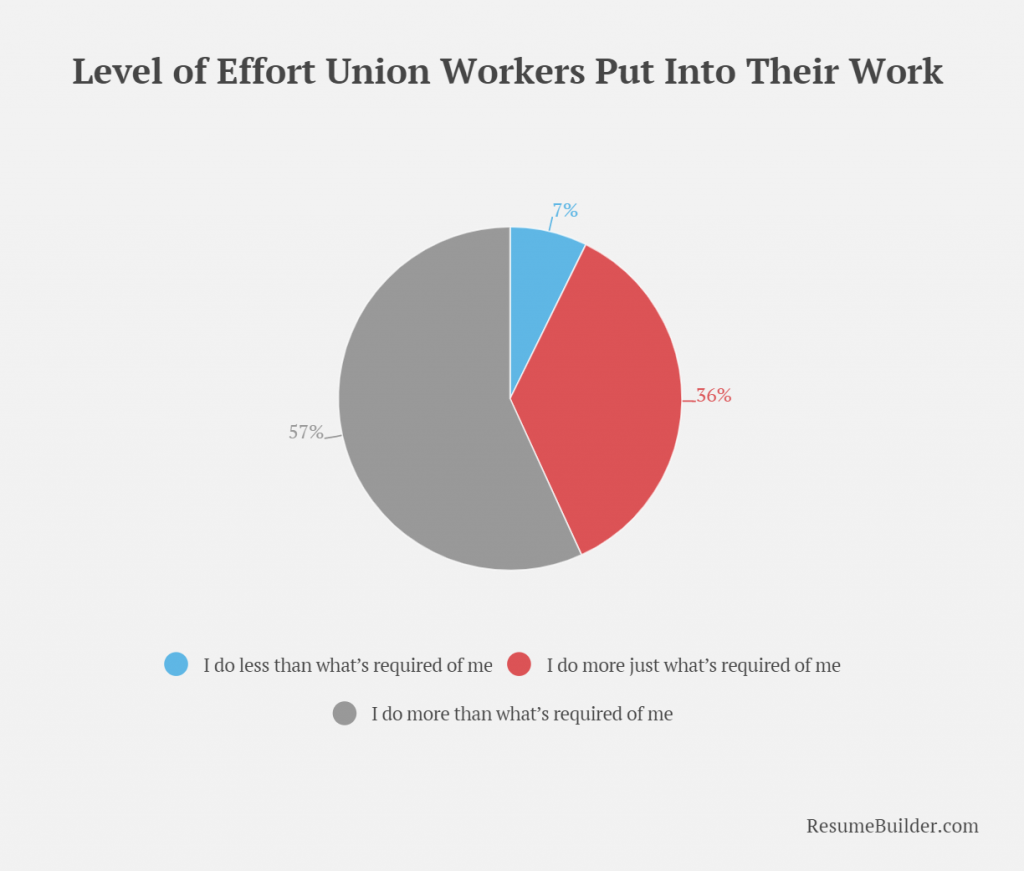 The plurality (63 percent) of union workers who are ‘quiet quitting’ say they’re ‘acting their wage,’ doing just what they are paid to do. Not more, not less.

Thirty-eight percent of union workers say they choose not to go above and beyond because doing so would hurt their co-workers.

On Reddit, one user explained that, “If I do the job of 2 people then I am basically taking away work from someone else. Someone didn’t get hired and missed out on paid work because I am doing their job and that’s a HUGE no no.”

Additional reasons union workers don’t go above and beyond at work include not believing it’s of any personal benefit (46 percent), it disrupts work-life balance (35 percent), and it negatively impacts mental health (27 percent). 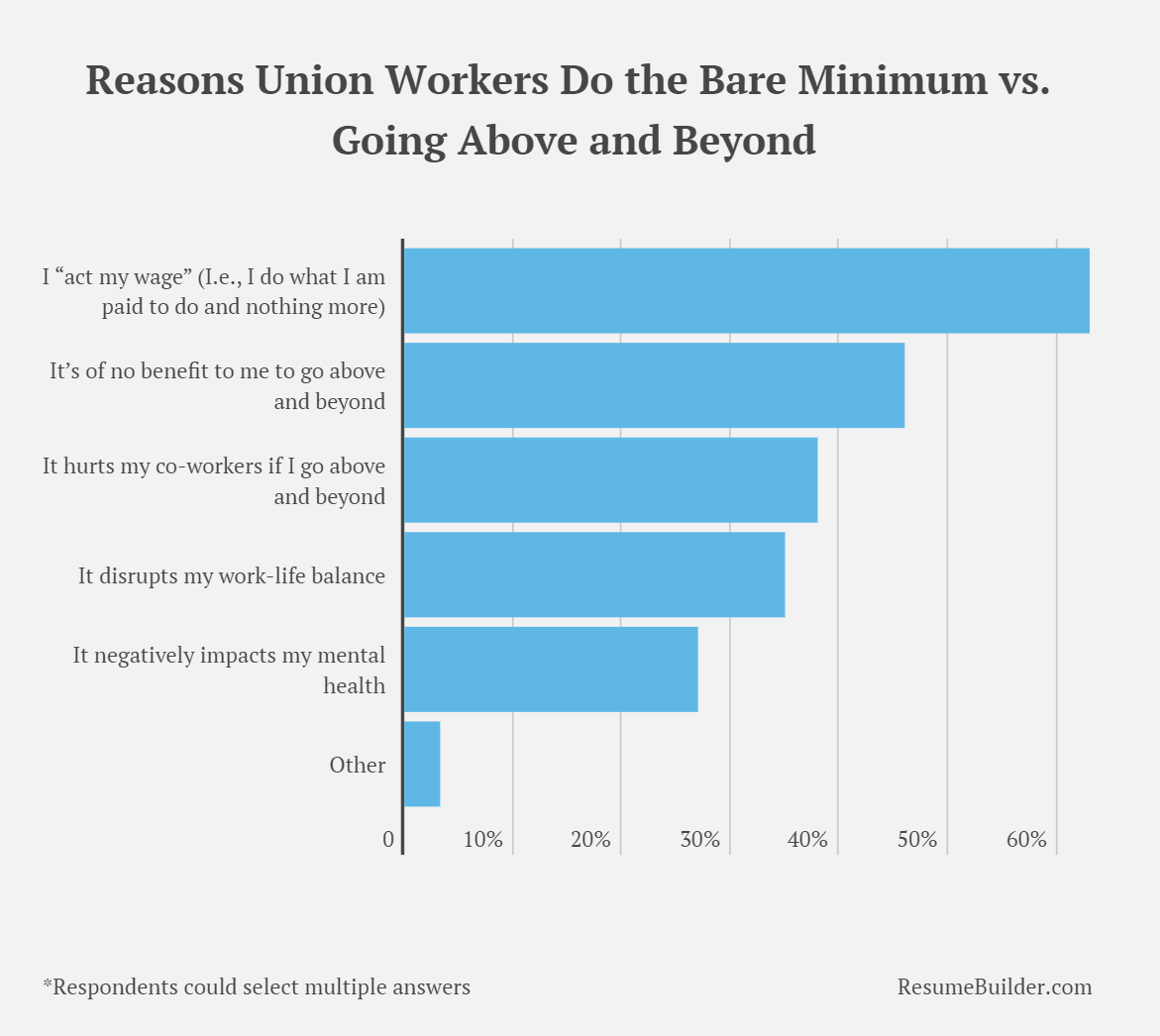 For the union workers who choose not to even meet expectations. The top reasons are they don’t get paid enough (56 percent), better work-life balance (44 percent), and it’s of no personal benefit (42 percent).

A large number of union workers (86 percent) say they believe some of their co-workers choose not to go above and beyond because they feel the union provides job security.

However, in reality the majority of those who just meet expectations or under perform are concerned about losing their job.

For those who do the bare minimum, 77 percent say they are ‘extremely’ (31 percent) or ‘somewhat’ (46 percent) fearful of losing their job because they just do what’s required of them.

For those who under perform, 93 percent say they are ‘extremely’ (60 percent) or ‘somewhat’ (33 percent) fearful of losing their job because they don’t do what’s required of them.

96 percent of union works say membership is important to them

The majority also care about their work. Overall, 92 percent of union workers say they care ‘a lot’ (65 percent) or ‘ a little’ (29 percent about their work), and 89 percent have a desire to advance at the company.

Union workers who are looking for something new are doing so because they want better benefits (64 percent), more money (59 percent), and to work for an employer with more reasonable expectations (43 percent). 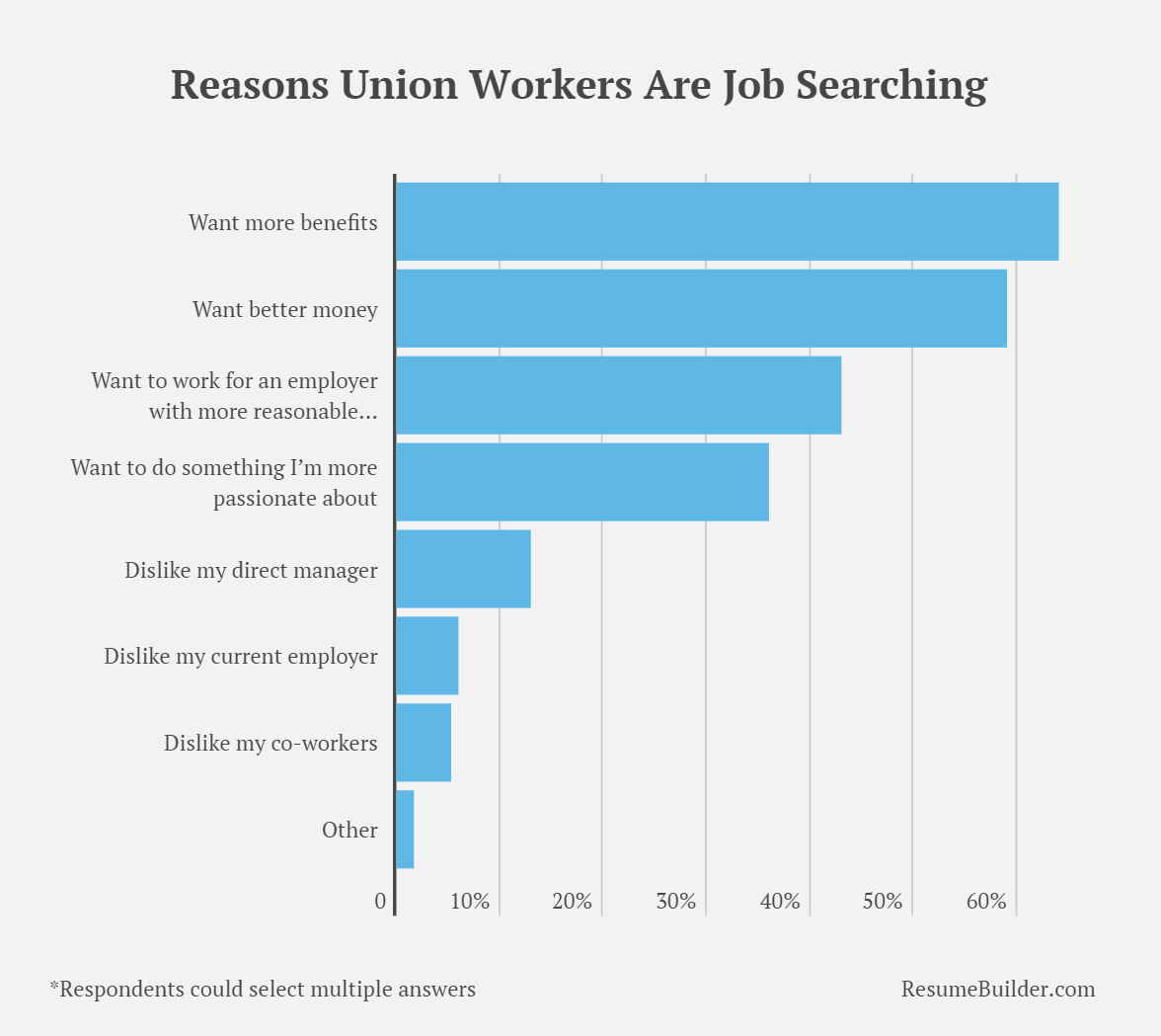 All data found within this report derives from a survey commissioned by ResumeBuilder.com and conducted online by survey platform Pollfish. In total, 1,000 Americans were surveyed.

Appropriate respondents were found via employment status demographic criteria and a screening question. To take the survey respondents had to answer that they are currently a union worker.

This survey was conducted on September 14, 2022. All respondents were asked to answer all questions truthfully and to the best of their abilities. For full survey data, please email Content Marketing Manager Julia Morrissey at julia@resumebuilder.com.

This story was first published by Resume Builder on Sept. 20, 2022 (https://www.resumebuilder.com/4-in-10-union-workers-identify-as-quiet-quitters/)