In August, the industry sectors with the largest over-the-month gains in employment include: Trade, Transportation and Utilities (+4,500), Construction (+3,500), and Government (+1,500). The industry sectors that reported the largest monthly payroll declines include: Manufacturing (-3,200), Professional and Business Services (-2,600), and Information (-500).

“The increase to statewide jobs and the continued historic decrease in continued claims levels for unemployment insurance benefits point to a strengthening Illinois labor market,” said Deputy Governor Andy Manar. “IDES remains committed to utilizing the tools at its disposal to connect employers and jobseekers who are looking to reenter the workforce and take advantage of the job opportunities throughout the state.”

“Illinois has seen considerable improvements in its unemployment rate and has added nearly 240,000 jobs, signaling a positive long-term trajectory,” said DCEO Director Sylvia I. Garcia. “Looking ahead, DCEO will continue to provide resources and training opportunities for job seekers while continuing to attract job-creators to Illinois.”

Compared to a year ago, nonfarm payroll employment increased by +239,700 jobs, with gains across nearly all major industries. The industry groups with the largest jobs increases include: Leisure and Hospitality (+58,600), Professional and Business Services (+51,900), and Trade, Transportation and Utilities (+50,800). The Mining sector reported no change in payroll employment over-the-year. In August, total nonfarm payrolls were up +4.1 percent over-the-year in Illinois and up +4.0 percent in the nation.

The number of unemployed workers was up from the prior month, a +1.1 percent increase to 290,200 and was down -23.0 percent over the same month one year ago. The labor force was almost unchanged (0.0 percent) over-the-month and up +2.0 percent over-the-year. The unemployment rate identifies those individuals who are out of work and seeking employment. An individual who exhausts or is ineligible for benefits is still reflected in the unemployment rate if they actively seek work. 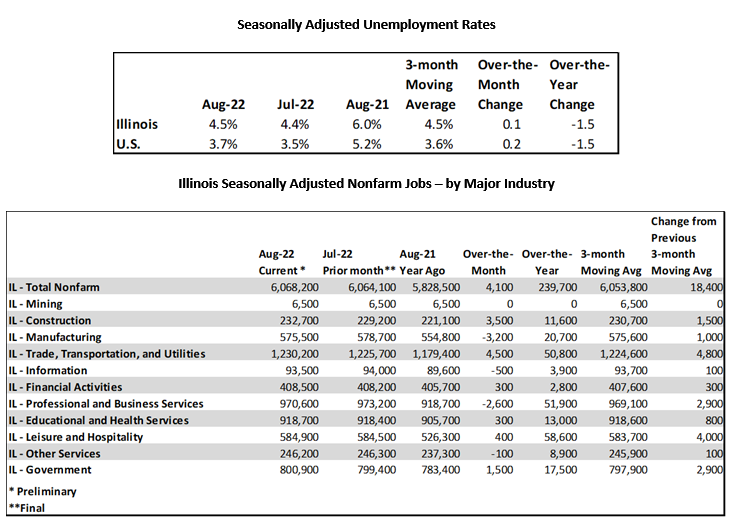 About the Department of Employment Security
The Illinois Department of Employment Security (IDES) provides vital employment services to Illinois workers, employers, and job seekers with resources including Job Fairs and IllinoisJobLink.com, analyzes and disseminates actionable Labor Market Information, and administers the Unemployment Insurance Program. To see the full range of services provided by IDES, and for the latest news concerning the department, visit IDES.Illinois.gov.