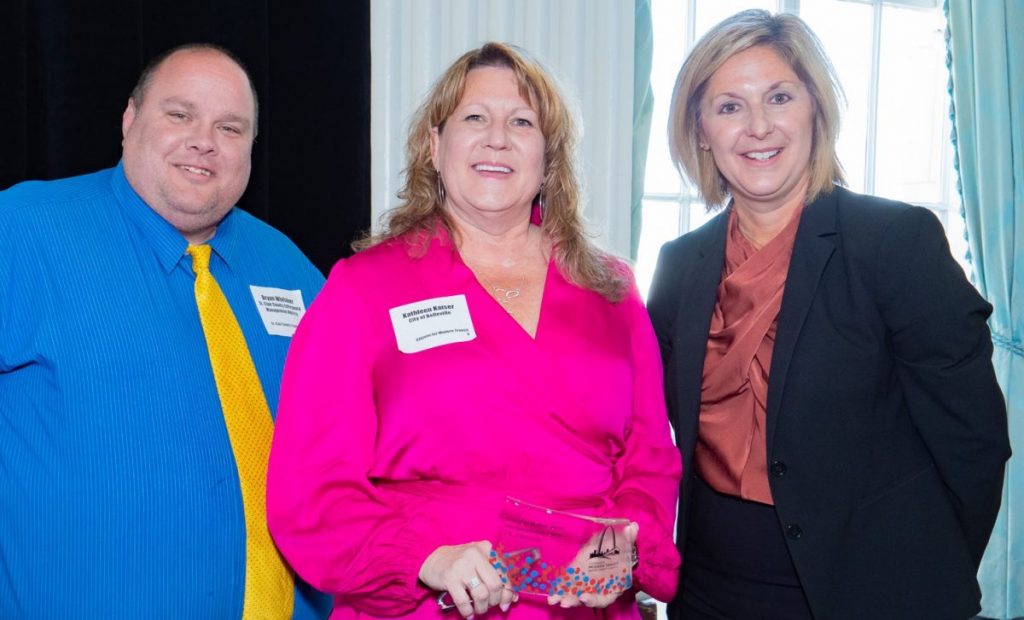 Citizens for Modern Transit (CMT), the region’s transit advocacy organization, recently celebrated the triumphs of several organizations and individuals in the area who display exemplary commitment to furthering transit in the St. Louis region.

During its 38th Annual Meeting on Sept. 8, 2022, CMT presented the 2022 Chairman’s Award to Greater St. Louis, Inc; the 2022 New Initiatives Award to the City of Belleville, Ill., and the REALTOR® Association of Southwestern Illinois; and the 2022 Service Award to Norm and Joan Krumrey.

The 2022 Chairman’s Award was given to Greater St. Louis Inc. (GSTL) for being a key advocate in Jefferson City, helping Missouri state representatives and senators understand the impacts of public transit access. This ultimately led to transit funding at the state level being secured at an unprecedented $8.7 million, marking the first-time funding had been increased in more than two decades. This award was presented to CMT board members Sam Murphy and Adam Kazda on behalf of GSTL.

The 2022 New Initiatives Award was given to the City of Belleville and the REALTORS® Association of Southwestern Illinois. Both partners were recognized for efforts in bringing to life the “Transit Stop Transformation” project at the Belleville Transit Center in St. Clair County. The project – the third of its kind in the region – converted the concrete area between the bus bays and MetroLink entrance into an interactive, playful and engaging space that boasts a vibrant-colored “Art Grows in Belleville” theme. The transformation would not have been possible without the dedication and support of both partners. This award was presented to Kathleen Kaiser with the City of Belleville and Bryan Whitaker with St. Clair County.

The 2022 Service Award was given to Norm and Joan Krumrey, both of whom spent 14 years volunteering as walk leaders of the Ten Toe Express, an award-winning program that helps older adults and other interested individuals lead healthier lives by linking activity, sociability and exercise with the use of MetroLink and MetroBus. Together they’ve led more than 350 walks. Their involvement has been priceless to the CMT organization, and both were in attendance to receive the award.