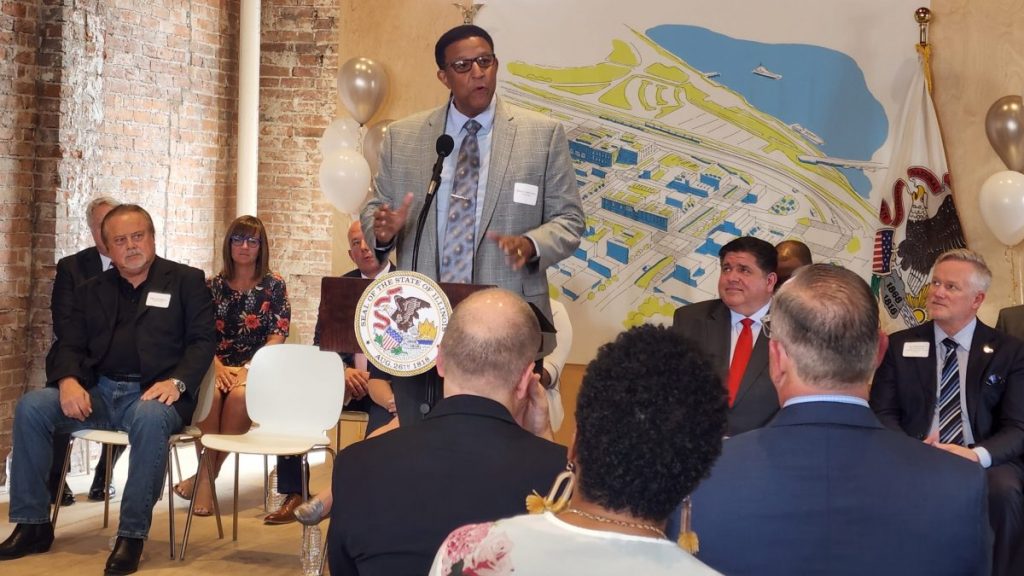 On Monday, Aug. 15, Governor JB Pritzker made rounds throughout Southwestern Illinois, delivering good news in the way of funding for downstate development projects that will inevitably alter the workforce climate and shape tomorrow’s leaders in ways of which were once only dreamed.

In Alton, it’s all about innovation.

AltonWorks CEO John Simmons and President Jayne Simmons welcomed Gov. Pritzker and several other special guests to their headquarters in Alton on Monday afternoon to share a major announcement.

Together, they announced the establishment of the Wedge Innovation Center, a $21 million revitalization project that will transform the former Wedge Bank and Elfgen buildings in the 600 block of East Broadway into an entrepreneurial and business accelerator, incubator, co-working space, and digital hub.

This is part of an overall strategic plan for AltonWorks that involves the renovation of 25 historic buildings it owns in downtown Alton, some of which are operating now and others that are forthcoming.

“At AltonWorks, we believe that innovation is foundational to transformational change, and it underpins our overall strategy,” explained AltonWorks CEO John Simmons. “Each area of economic development that we are focused on overlaps and sustains the others by creating communities of people who support each other. I’m convinced, with the right investments combined with a big, can-do attitude, Alton can become a bright light of innovation, opportunity and equity for this entire region.”

Gov. Pritzker had come to town to announce that Alton’s Wedge Innovation Center would be receiving $3 million in funding support from the state through its Rebuild Illinois Downtowns and Main Streets Capital Program.

“AltonWorks is changing downtown Alton,” Pritzker said. “And with that upgraded infrastructure comes economic opportunity: more jobs, more business growth, and more money pouring into the communities that need it most- which perfectly encapsulates the guiding principle behind the Downtowns and Main Streets Capital Grant program.”

“The Wedge” will have a focus on social impact innovation and specialize in livability, clean tech and climate tech to benefit everyday lives. With its incubator and co-working space assets, it will include private office spaces, a fiber network, free Wi-Fi, conference and training space availability, and the possibility for a restaurant and retail space on its ground floor.

Construction is slated to start in October 2022, with a projected date for the Wedge Innovation Center opening in second quarter 2024. BSI Constructors, Inc. of St. Louis is the general contractor for the project, and Ko and Company Inc. owned by Kiku Obata & Company, is its architect.

Simmons said that the $21 million for the project is coming through bank financing, private investment and historic tax credits. The $3 million State of Illinois grant funding would be an added funding source. 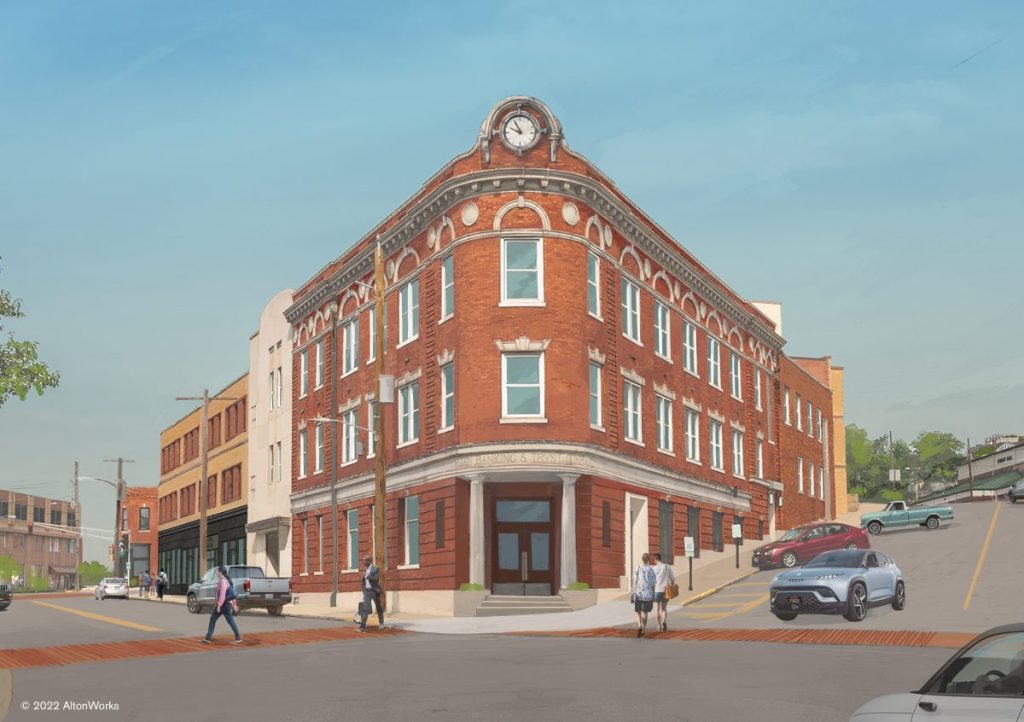 Plans are to keep as much of the historic and iconic appearance of the Wedge structure as possible since first built in 1904 and opened as the former Alton Bank & Trust Co. The technology and design options for the functional space will encompass state-of-the-art innovations throughout.

It is estimated that the construction of the Wedge Innovation Center will bring with it over 100 full-time jobs to the area. The construction includes a commitment by AltonWorks and BSI Constructors to use 25 percent Minority and 6 percent Female workers on this project.

The Wedge will support early-stage, growth-driven companies through education, mentorship, and financing. It will house startups, space for individuals or teams, and more established companies that want to accelerate their businesses or develop new technologies, products, or systems.

Once open, it is expected that the Wedge would create 249 permanent full-time and 62 permanent part-time jobs, with an average wage over $43,000 per year. A projected 84 percent of the permanent jobs created would be at a living wage, 20 percent would be accessible to persons without a four-year college degree, and 90 percent would be hired from the surrounding community.

By developing this innovation center, AltonWorks hopes to create an entrepreneurial ecosystem for the region that attracts businesses, investors, seed- and early-stage financing, and media attention, all of which will help both the local and regional economies.

“We are determined to work with public and private partners to revitalize Alton into the type of city in which people want to live, start a business, and be included in the fabric of the community,” said AltonWorks President Jayne Simmons. “The pandemic has revealed a need and urgency to focus on the type of innovation that will make downstate Illinois a preferred relocation destination.”

AltonWorks is further engaged in dialogue of collaboration with Southern Illinois University Edwardsville (SIUE) to operate the Wedge and develop programs and services that meet the needs of the entrepreneur and business community.

SIUE’s expertise in applied science, research, and data analysis, as well as its many outstanding academic programs fits well with AltonWorks’ desire to catalyze transformational change for Alton and the region.

“SIUE shares a commitment to Alton, the Metro-North, Metro-East, and Illinois, recognizing the tremendous power of our university to transform lives. We are proud to collaborate as an anchor partner and serve the workforce development, research and innovation needs that are central to a brighter future,” said SIUE Chancellor James T. Minor, PhD. “We look forward to defining our partnership with the Wedge Innovation Center.”

Other special guests were on hand to share in the announcement and offer their words of support for the AltonWorks vision and its development of the Wedge Innovation Center.

Among them was Illinois Department of Commerce and Economic Opportunity (DCEO) Director Sylvia Garcia, who emphatically noted during her remarks, “We have an infrastructure Governor,” while further sharing support for the development of innovative business incubators like the Wedge.

State Sen. Kris Tharp (D-Bethalto) touched on the positive developments happening throughout the Metro East region, and further noted, “To put it simply, great things are happening in Alton.”

State Rep. Katie Stuart (D-Edwardsville), joining in on what Sen. Tharp had highlighted, said, “Edwardsville and Collinsville both have amazing opportunities ahead of them, and this Rebuild Illinois grant sets them up for success. I couldn’t think of a better use of grant dollars than investing them in high-traffic areas used by all.”

“This is a real testament to the real leadership we have,” Stuart added.

As a part of his remarks in support of the Wedge Innovation Center announcement and of all the funding slated for projects from the Rebuild Illinois initiative, state Sen. Christopher Belt (D-Swansea) said, “If you rehab it, they will come. If you reinvest in it, they will come.”

State Rep. Jay Hoffman (D-Swansea) talked about the vibrancy AltonWorks and this project brings back to downtown Alton, while Alton Mayor David Goins expressed his enthusiasm about the opportunities that will come from it, including jobs, economic growth, revenue generation, and a renewed sense of entrepreneurialism.

Goins further noted, “Regionally, we are not in a competition. We will rise together.” 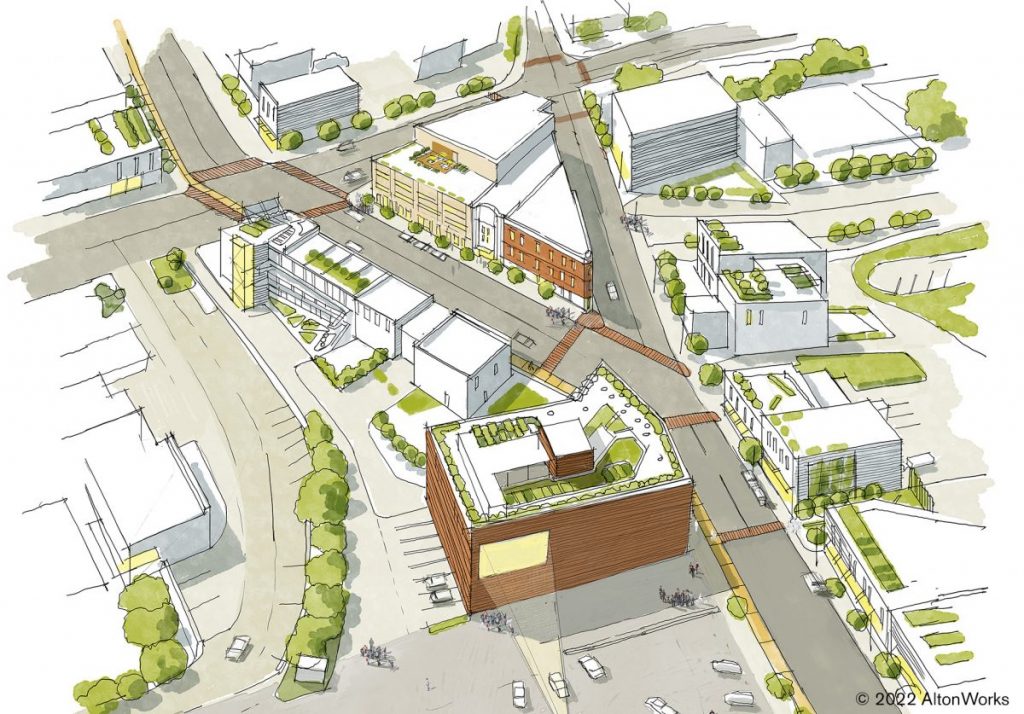 Photo 2: A final rendering of the soon-to-be developed Wedge Innovation Center, coming to the 600 block of East Broadway in Alton in 2024. A redevelopment project by AltonWorks slated to open in second quarter 2024, this revitalized structure will retain much of its iconic exterior, encompassing the former Wedge Bank and Elfgen buildings. (Image courtesy of AltonWorks)

Photo 3: An aerial rendering of the soon-to-be developed Wedge Innovation Center, coming to the 600 block of East Broadway in Alton in 2024, a redevelopment project by AltonWorks slated to open in second quarter 2024. (Image courtesy of AltonWorks)

(Editor’s Note: This story and the first photo were also published in the September 2022 print edition of the Illinois Business Journal.)