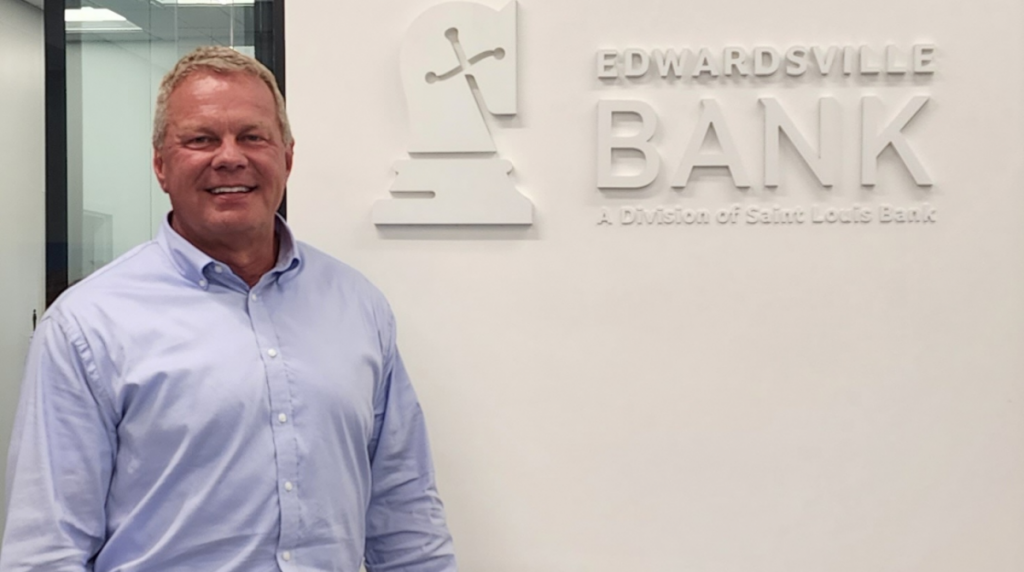 Some say that growing up in rural America puts a person at a serious disadvantage right from the start gate. Realizing a dream can often mean traveling a longer path along many a country road before arriving at the “big city.” For Gant Harper, there’s a lot about those words that ring true for him.

Harper was recently named president of Saint Louis Bank after working there for over two years. St. Louis Bank’s footprint includes the 209 East Schwartz Street location of Edwardsville Bank, which serves primarily commercial customers throughout the Southwestern Illinois region. Future plans include an expanded presence in the region as well.

But Harper is not new to banking, nor is he new to the region. The same could be said about most of his colleagues at St. Louis Bank and its Edwardsville location. “Our CEO, Travis Liebig, went to SIUE. And he’s passionate about our bank being known as ‘the bank’ in the community. He’s completely committed to that, and our entire team shares in his commitment and vision,” said Harper.

“When The Bank of Edwardsville was bought by Busey, and Clover Leaf by First Mid, there were several of us wanting to see a true community bank come back to Edwardsville,” he said. “St. Louis Bank had started looking at Illinois, and saw a real opportunity to bring a community, hometown bank back to town.”

“After all, if you don’t know the area, you really can’t connect with your customers and meet their needs like you can when you know them and where they come from,” Harper added. “Being local, and serving local, keeps us continually in sync with the local economy and with its business environment.”

“Being active in the community, and giving back to it, is another important part of what we do every day,” Harper said further. “We sponsor our employees’ passion projects and those that come from the community. We have started a community fund and scholarship opportunities as well, through Saint Louis Bank’s foundation. Employees are also given two days a year of paid time to volunteer in the community.”

Saint Louis Bank is now nearing the $1 billion asset mark; four years ago, it was at $450 million. A group of investors led by Liebig bought Saint Louis Bank in 2018 for $30 million, with plans to attract small to mid-size businesses with up to $50 million in annual revenue.

Liebig previously shared that the combined job of president and CEO at Saint Louis Bank had become too big for one person, so it was split. Liebig continued as its CEO, with Harper named as president.

“We’ve also recently brought on a new director of community development to further demonstrate how sincere we are about our commitment to being a true community partner,” said Harper. He shared that  Cara Spencer, former St. Louis mayoral candidate and current alderman, had been tapped to fill the role of senior vice president of community and economic development.

Harper’s career path has spanned the industries. He spent a decade along the path as a CPA. He has also held roles in motorcycle dealerships, contracting, and manufacturing companies. As a banker, his diverse career journey and first-hand insights into these various industries have allowed him to better understand the needs of the community and its bank customers.

Not bad for one small-town boy growing up in rural Woodburn, Macoupin County, and graduating from nearby Bunker Hill High School, about 20 miles north of Edwardsville, Ill., where his roots still run deep.

(Editor’s Note: This story was also published in the September 2022 print edition of the Illinois Business Journal.)