Editor’s note: This story was originally published in the Belleville News-Democrat and further shared online by St. Louis Public Radio. 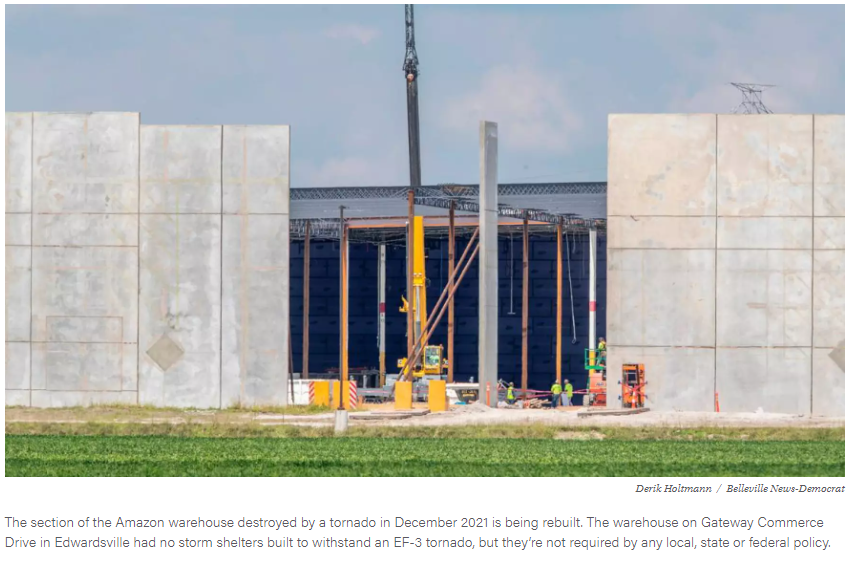 Reconstruction is underway on the Amazon warehouse in Edwardsville where six workers died when a tornado tore through part of the building in December.

The rebuilding plans do not include a storm shelter, according to city officials.

In the wake of the storm, warehouse employees and supporters of labor said the building should have included a protective shelter, even though building codes do not require them.

Amazon referred questions to its landlord, including those related to storm shelters and a possible memorial for the six tornado victims.

Realty Income Corp. of San Diego took out the building permit, according to documents released by the city of Edwardsville in response to a Freedom of Information Act request by the Belleville News-Democrat. A representative from Realty Income Corp. could not be reached for comment.

Knight Commercial of Addison, Texas, is the general contractor for the rebuilding project. A representative also could not be reached for comment.

The six employees died when the warehouse walls and roof collapsed in an EF3 tornado packing winds of up to 150 mph at about 8:27 p.m. on Dec. 10. The 1.1 million-square-foot building at 3077 Gateway Commerce Drive near the intersection of Interstate 255 and Interstate 270 sustained most of the damage on its south side. Those who survived the storm were on the north side of the building.

Plans call for the repaired section to be completed with the same “tilt up” wall construction that was used originally, according to a prepared statement from the city of Edwardsville.

The concrete tilt-up walls have been criticized by lawyers representing families of the deceased workers.

A wrongful-death lawsuit filed by three law firms on behalf of the family of the late DeAndre Morrow, 28, alleges that Amazon “knew or should have known that this manner of construction causes walls to fall when struck with high winds and knew that Edwardsville, Illinois was prone to inclement, severe weather and tornadoes.”

The Tilt-Up Concrete Association says these types of walls are made by pouring concrete into molds on the ground and then the panels are lifted into place to form walls. A representative of the group could not be reached for comment.

Larry Tanner, an architectural engineer who worked at Texas Tech University for 20 years testing shelters, told the BND in December that this wasn’t the first time a tornado has caused deaths in similarly constructed buildings. Eight people died in a Joplin, Missouri, Home Depot in 2011, Tanner said.

“They all fail similarly in that the winds are sufficient enough from 130 mph to lift up the roof decking, the steel decking, and when you lift those up, you start a chain of failures,” Tanner said. “That same set of dominoes has occurred forever in these storms. The taller the building, the longer the spans, the greater catastrophe.”

A wrongful-death lawsuit also has been filed on behalf of the family of the late Austin McEwen, 26, a delivery driver who was at the warehouse the night of the storm.

Jack J. Casciato of the Clifford Law Offices in Chicago, is one of the lawyers representing McEwen’s family. He said he has learned that the reconstruction plans did not include storm shelters, which he described as “very unfortunate.”

Casciato said Amazon has sold commercial grade storm shelters but has since taken the products off the Amazon website.

“If you could make money off the storm shelters, why would you not have them for your own people and it’s unfortunate that once again it appears they’re not learning from this situation, this tragedy,” Casciato said.

The four others who died in the Edwardsville tornado were Clayton Lynn Cope, 29, of Alton; Etheria S. Hebb, 34, of St. Louis; Larry E. Virden, 46, of Collinsville; and Kevin D. Dickey, 62, of Carlyle.

State lawmakers convened a hearing in February about whether warehouses should have a storm shelter but no legislation has resulted.

The city of Edwardsville said this is an issue “on which we’ve been awaiting state guidance, as there have been ongoing discussions in the Legislature.”

An investigation by the Occupational Safety and Health Administration did not result in any penalties for Amazon because they met “minimal federal safety guidelines for storm sheltering,” according to the agency. OSHA recommended Amazon review its policies, but there was no enforcement mechanism to force the company to change.

The warehouse, which in July 2020 with 190 employees, had a designated area in the interior of the building where employees were directed to shelter in the event of a storm, a company spokesperson said. It’s away from windows and the threat of flying glass, but otherwise has no additional structural fortification.

The National Storm Shelter Association has said adding a storm shelter to the warehouse would have added about 2% to the overall cost, according to a report by St. Louis Public Radio.

A building permit application dated May 11 states that the building repairs will cost about $8 million.

The city did not know when the work would be finished but said that construction began in June.